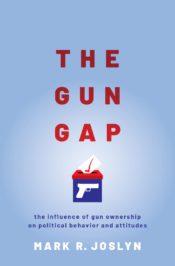 Recently, Joe Biden visited a construction plant in Michigan. A worker confronted Biden and accused the former vice president of “actively trying to diminish our Second Amendment right and take away our guns.” Biden, in turn, responded, “You’re full of shit.”

The exchange continued, cameras rolling, Biden clearly sensed an opportunity, recognized the political value of the moment.  Biden’s staff stepped in to try and move him aside. He waved them off. After all, his successful legislative record on guns – including the 1994 passage of a 10-year ban on assault weapons and high-capacity magazines – and frequent boasts about taking on and beating the NRA were at stake. Dodging the worker’s accusations was not an option.

Biden’s assertive posture on guns recalls the 2000 election. And this worries Democrats.

In 2000, the Democrat Party Platform celebrated Al Gore’s record of standing up to the NRA, the legislative successes of the Clinton administration, namely the Brady Bill and the Assault Weapons Ban, and called for mandatory gun locks and a host of federal programs regulating gun purchases.

This is not a small or insignificant political group. Opinion surveys estimate a third to 40% of households have a gun. That percentage increases notably among the all-important rural voting population. Moreover, in several key swing states gun owners comprise a substantial proportion of voters, including Minnesota, Pennsylvania, Florida, Michigan, and Wisconsin. As Democrats remember, in a tight election, gun owners’ vote can be decisive.

But the former vice president believes much has changed since Al Gore’s defeat.

Will gun owners believe him? It may not matter.

Gun politics appears to be shifting.   Democrats are now better positioned to engage Republicans on guns. Mass shootings repeatedly remind voters of the dangers of gun availability and the unspeakable violence that can result. Gun safety groups are much stronger and better financed than in the past. They outspent the NRA by millions in the 2018 midterms and defeated many NRA backed candidates. Exit polling showed gun policy among Democrats ranked number two behind health care and ahead of immigration and the economy. It ranked fourth among all voters. In addition, gun violence prevention was the top issue among young people.

These facts strengthen Biden and calm fears of many Democrats.

Returning to Detroit, the factory worker repeated he had heard Biden make that claim, that he would take guns away. “It’s a viral video,” the worker declared. “I did not say that! I did not say that! Biden replied, his voice raising, temper flaring, finger pointing. “Don’t be such a horse’s ass,” he added.

Predictably, the NRA released the video of the confrontation on twitter with the headline “Joe:  Gun owners see through your lies.”

Biden’s campaign touted the video as well, using it to spotlight Biden’s authenticity and strong advocacy for gun control and his long-time commitment to an assault rifle ban.

Both sides are dug in, their collective heels firmly planted. Both are betting their position on guns will be the winner.

The 2020 contest will be close; it will be an epic battle.

Which party prevails may turn on whether swing state gunowners believe the factory worker or Joe Biden.

Mark R. Joslyn is a professor of political science at the University of Kansas. He has written over 50 journal articles, including publications in The American Journal of Political Science, Journal of Politics, Public Opinion Quarterly, Political Behavior, and Political Psychology. His research explores political attitude formation and change.