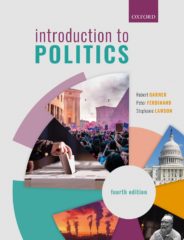 Perhaps the most significant factor for students of politics is the role of the state. Ironically, in the United Kingdom, the arrival of the virus has achieved, in terms of the state’s reach, more than even the most ardent Corbynite could have dreamt about. Not only has the state intervened to shore up the economy – by, most notably, agreeing to pay a significant part of the wages of those economically disadvantaged by the health emergency – it has also taken unparalleled measures to control our everyday movements.

Arguably, though, the state should do more.

One of the most pervasive images of the present COVID-19 emergency has been the panic buying and stockpiling of food and toiletries. Rather oddly, when state intervention and control has become the norm, the state has not sought to formally ration supermarket produce. Instead the accent has been on the moral dimension. Those who have stripped our supermarket shelves of food and toiletries have been described, amongst other things, as selfish, greedy, ignorant, and immoral. The government has sought to reassure people that there is more than enough to go around and has appealed to their better nature – be reasonable when you shop, think about what you are depriving others of.

In actual fact, stockpiling has nothing to do with moral character but has everything to do with a collective action problem identified by rational choice theory. Rational choice approaches to politics and social organisation have become an increasingly important branch of the social sciences. Following a deductive logic, the (reasonable) assumptions made are that human beings are essentially rational, utility maximisers who will follow the path of action most likely to benefit them (and their families). This approach has been used in game theory where individual behaviour is applied to particular situations. This reveals how difficult it can be for rational individuals to reach optimal outcomes. That is people might not cooperate even when it is in their best interests to do so.

This collective action problem can be illustrated by the classic rational choice instrument, the prisoner’s dilemma. In this scenario, two people suspected of being involved in a robbery are arrested and interviewed separately in a police station. There is insufficient evidence to convict the pair of robbery but there is enough evidence to convict them of a lesser charge, whatever that may be. The suspects have a choice put to them by the police, to either keep quiet or to betray the other with different penalties imposed depending on their choice. Three outcomes are possible.

So, what has all this got to do with panic buying and stockpiling? Well, clearly the best outcome – supermarket shelves remaining stocked with more than enough for everyone shopping at any one time – can only be achieved by cooperation, by everyone taking only what they need. However, we are not in a position to consult with our fellow shoppers to discuss the matter, and even if we were, there is no guarantee that we will not be double-crossed by people who agree to cooperate and then betray us by over-buying. As a result, because we do not trust each other to cooperate (and we also do not trust the Government’s regular reassurances that there are more than enough products for everyone) the best strategy is to over-buy to ensure we are not left with nothing. That is the rational thing to do.

Can this problem be resolved? Well, one possibility, already widely practised, is for supermarkets to limit purchases to a certain number of each item. The problem with this, however, is that, even if we are restricted to buying only one of each item, it only prevents over-buying on one particular occasion. That is, it does not stop shoppers coming back repeatedly to buy the same things over and over again. And that is what is happening. That is why there are queues at supermarkets.

Another possibility is for supermarkets to ration purchases, to put a limit on what can be bought over a set period of time. However, this, of course, will have consequences for profit margins. In another prisoner’s dilemma-type scenario it would not be rational for one supermarket to limit its profits particularly when there is no guarantee that other supermarkets would be prepared to cooperate and do the same.

So, what is left? Well, the only genuine solution to stockpiling and panic buying is for the state to intervene and introduce a compulsory rationing scheme to which every supermarket and every shopper would have to adhere. The government’s virus discourse already has war-time parallels, albeit with an invisible enemy, and, in that sense, the introduction of rationing seems entirely appropriate.

Robert Garner is a professor of politics at the University of Leicester.

The ethics of defeating COVID-19