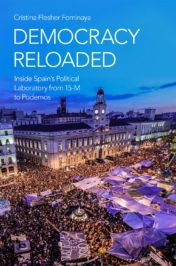 Democracy Reloaded: Inside Spain's Political Laboratory from 15-M to Podemos

The 2008 global financial crash brought with it a series of aftereffects that are shaping how different nations face the current pandemic. Austerity politics took a firm hold across Europe and other countries whose economies were hard hit, with governments and financial institutions arguing that they were an unavoidable consequence of the crash. While many corporations bailed out with public money recovered rapidly, public spending continued to be curtailed under the weight of public debt burdens. As unemployment soared, hundreds of thousands of people faced foreclosure and eviction. But austerity was not accepted quietly, it was met with mass mobilizations that demanded a reordering of political priorities to place the needs of ordinary citizens above those of elites. The outcomes of these movements are still unfolding, and their critiques are taking on new relevance as the world reels from the coronavirus pandemic.

In the United States, the Occupy Wall Street movement managed to engender a remarkable 400-plus “occupations” around the country. Although the movement ultimately waned, it established new connections that flowered in movements like Black Lives Matter and the Women’s Marches. The language of Occupy Wall Street, particularly its economic justice frame, also created a shift that destabilized the hegemony of TINA (There Is No Alternative) neoliberal discourse, paving the way for the grassroots fuelled Sanders and Warren campaigns, and for a new generation of young politicians representing marginalized communities in Congress. “Socialism” and the vision of a nurturant state that cared for its citizens began to make inroads into US political discourse, galvanizing a new generation to become politically engaged.

In other countries, like Spain, the 15-M movement had a much greater impact on institutional politics, ultimately leading to the creation of new municipal electoral alliances and new national political parties, like Podemos. These political parties and coalitions sought to translate the movements’ core demands to the institutional arena: an end to austerity and institutionalized corruption; a reinforcement of the social welfare state; and a progressive political agenda. As a result, municipal movements came to power in several of Spain’s major cities in 2015, demonstrating that progressive politics and social welfare provision were compatible with fiscal responsibility and reducing public debt.  In 2020, Podemos entered government in the first coalition government of Spain’s post Franco democracy. This brings us to the second crisis, the global COVID-19 pandemic.

How has the 2008 global financial crisis and its after-effects conditioned this moment? The first clear effect is that states that pursued austerity politics and underfunded or privatized public health facilities find themselves unable to adequately deal with the burden caused by the pandemic. Austerity threw greater numbers of people into poverty. Data from the OECD and Credit Suisse shows that wealth inequality has increased significantly since 2008. The poor are the hardest hit by the pandemic, and the least able to practice social distancing and other protective measures, meaning that not only will more of them become infected and die, but this will further the virus’ spread.

In countries like the United States, whose health care provision is based heavily on direct fee and private healthcare, the pandemic has revealed the limitations of this model in a more powerful way than any social movement ever could, and the lessons it offers are tragic and profound. The perversity of states outbidding each other and competing with the federal government for ventilators at a time of national crisis exposes the absurdity of the current system and its unsustainability in times of crisis. The unviability of employer-based health care provision is exposed when mass unemployment meets global pandemic.

In the cold reality of this pandemic, progressive movements continue to push for a paradigm shift, and activists and politicians like Elizabeth Warren and Ayanna Pressly, highlight the matrix of racial and economic injustice that shape the unequal impact of the pandemic on communities.  But they lack the institutional power to influence the response of the administration of Donald Trump administration, which is impervious to their demands.  As the pandemic advances relentlessly, Trump advocates a scientifically unproven drug for COVID-19 that he has a financial interest in, and his chaotic administration demonstrates its ineptitude in the face of the greatest crisis in decades.

In Spain, we see a very different scenario. While austerity measures have crippled the fight against the virus and the economic consequences of the pandemic are already devastating, the  government’s response has been radically different from the response to the previous crisis. The mobilization of the 15–M movement following the 2008 global crash not only paved the way for Podemos to enter government, but pushed the government to adopt a more progressive social welfare agenda. The government is proposing a series of social and economic protective measures, such as guaranteed utilities, 0% microcredits designed to protect the most vulnerable, and a form of Basic Income Support -not as a stop gap measure but as a permanent one- potentially significantly transforming the social welfare state. The deputy prime minister, Podemos’ Pablo Iglesias, defends these measures by invoking the lessons of the last crisis, in which austerity left the most vulnerable bearing the greatest costs.

He can win that argument thanks to the mobilization of the social movements that enabled the birth of Podemos and related municipal coalitions following the 2008 crash. Coronavirus will transform every society on earth in ways we can’t yet begin to imagine. How nations respond to this crisis will not be aleatory, but will depend in great measure on how they responded to the last one.

Cristina Flesher Fominaya is an Excellence 100 Reader in social politics and media at Loughborough University. She is the editor-in-chief of Social Movement Studies and a founding editor of the global social movements journal Interface. She is the author of Democracy Reloaded: Inside Spain's Political Laboratory from 15-M to Podemos and Social Movements in a Globalized World.

Why global crises are political, not scientific, problems