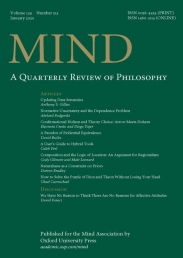 Mind has long been a leading journal in philosophy. For well over 100 years it has published the best new work in all areas of the subject. The journal continues its tradition of excellence today. The journal aims to take quality to be the sole criterion of publication, with no area of philosophy, no style of philosophy, and no school of philosophy excluded. Each issue also contains a selection of book reviews that summarize and evaluate some of the most interesting recent publications in the discipline.

Philosophers disagree on what philosophy is supposed to do, but one popular candidate for what is part of the philosophical project is to try to understand the place of human beings in the world. What is our significance in the world as whole? What place do human beings have in the universe and in all of reality? These questions are not merely about how we are different from other creatures, or whether we are special in the sense that we are the best or worst at something. We might be the best at music in all of the universe, but that by itself does not make us special in the right way. The largest volcano is special in that it is the largest one, and that makes it special in some sense. But the universe might not care about large volcanoes, so to speak, just as it might not care about music. If we are truly special in and central to the world then we must be so in some way other than being simply best or worst at something. But it is not easy to say more precisely in what sense we must be special in order for this to be of philosophical interest.

Let us call the question we are after when we ask about our place in the world the Big Question. How to state the Big Question more precisely and explicitly is not clear, but we can approach the Big Question by considering the two main responses to it that seem to answer it as it is intended.

The first of these answers is the broadly naturalistic answer, which holds that we are not special. We are merely slightly more complex creatures that arose out of a fortunate accident and that is locally, on planet earth, significant. But the world as whole, the universe, or more philosophically, all of reality, is largely indifferent to us. We are at best a fortunate bonus to reality, but not a central part of it.

The second main answer to the Big Question holds that we are special, since we have a special relationship with God. We are central to the world as a whole, since we are part of the reason why there is a material world in the first place: God created it for us, or at least with us in mind. If this were so then we would be truly special in the world as a whole and have a significance that other creatures wouldn’t have.

These two answers to the Big Question are well known and fiercely debated. And this debate naturally is in part about whether there is a God who has such a close connection to us.

But besides these two answers there is also a third answer to the Big Question. This answer holds that we are special, not because we have a close relationship to God, but more directly, because there is an intimate connection between our minds and reality itself. Our minds and the world as a whole are, somehow, connected and this link gives us a central significance in the world. Such an answer has been defended from time to time in the history of philosophy, where it is generally labeled as idealism. This idealist answer to the Big Question is nowadays considered mostly of historical significance, as a view that was defended in the distant past, but which is a compete non-starter in contemporary philosophy. Nonetheless, there is reason to think that this idealist position is indeed correct. And if so then our significance in the world would not come from a connection to God, but because our minds and reality itself are directly and intimately connected. Such a view must surely seem absurd. After all, human beings have only been in contact with a small part of the universe, spatially and temporally, so how could we be central for all of it? Let’s consider one way this could be.

If facts are not things and this picture of what we do when we talk about facts is on the right track then there is a kind of a harmony between reality as the totality of facts and what can be represented in our language. All facts are representable by us, since talk about all facts, including what I say in this sentence, generalizes over the instances in our own language. Thus it is ruled out that there are facts that cannot be represented in our language at least in principle. And so what can be represented by our human minds or languages and reality as the totality of facts is connected in an intimate way. Any facts that could obtain must be representable by us. And this leads to the kind of idealist third answer to the Big Question alluded to at the beginning. We are central in the world as a whole, not because of our connection to God, but because of a direct connection between our minds and reality itself.

We are not the center of the universe, nor does our centrality rely on a connection to God. We are central because there is a harmony between reality as the totality of facts and what our minds can represent in thought or language. And if this is indeed so then we truly have a special place in the world.

Featured Image Credit: ‘Woman standing on rock in front of mountain during daytime’ by Lucas Wesney via Unsplash.

Thomas Hofweber is a professor of philosophy at the University of North Carolina at Chapel Hill. He specializes in metaphysics, the philosophy of language and the philosophy of mathematics, and is the author of Ontology and the Ambitions of Metaphysics (OUP, 2016) as well as numerous articles in various journals. His article, "Idealism and the Harmony of Thought and Reality", was included in the 2019 Best of Philosophy collection.