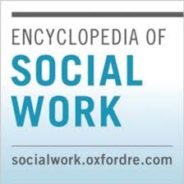 The Oxford Encyclopedia of Social Work is the first continuously updated online collaboration between the National Association of Social Workers (NASW Press) and Oxford University Press (OUP). Building off the classic reference work, a valuable tool for social workers for over 85 years, the online resource of the same name offers the reliability of print with the accessibility of a digital platform. Over 800 overview articles, on key topics ranging from international issues to ethical standards, offer students, scholars, and practitioners a trusted foundation for a lifetime of work and research, with new articles and revisions to existing articles added regularly.

We celebrate National Professional Social Work Month each March. The theme for Social Work Month in 2020 is Generations Strong. This is a great opportunity to look at the lives of pivotal figures in the history of social work and social welfare. The seven women discussed below made important contributions to people’s lives and to social work as a profession. Their lives also reflect environmental assaults, such as socioeconomic disenfranchisement, racism, sexism, classism, and other toxic issues that continue to plague vulnerable communities.

The following biographical sketches represent the coming of age of social work from an international perspective and shows the positive impact of social workers, social justice advocates, and other helping professionals over the last century.

Though Sendler was arrested and subjected to extreme brutal treatment by the Germans, she was always helped and saved from imprisonment and death, once by a German officer who accepted a bribe from the Zaguta, a Polish underground group, and once by a Jewish woman.

The extraordinary services exemplified by these seven social workers and their allies serve as examples of what it means to uplift humanity, and to serve others. Their work demonstrates our connectedness as humans and the importance of standing for something larger than oneself.

Sadye L. M. Logan is the I. DeQuincey Newman Distinguished Professor Emeritus of Social Work at the University of South Carolina, as well as an editor for the Encyclopedia of Social Work which is co-published by Oxford University Press and the National Association of Social Workers.