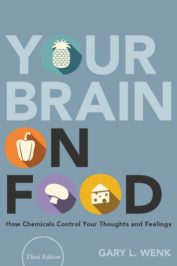 Your Brain on Food, Third Edition

Diets and superfoods are all the rage. From acai berries to the Zone diet, many a dietary trend has come along promising a range of benefits, such as weight loss, heart health, and improved cognition. But the science behind these claims is often sketchy at best. One dietary regime that has stood the test of time – and importantly, scientific scrutiny – is the Mediterranean diet. Earlier this year, U.S. News and World Report named the Mediterranean diet as the best diet of 2020 for the third year in a row. The diets were scored by a panel of nationally recognized experts in diet and nutrition. In second place was another consistent high performer in the rankings, the DASH diet (DASH stands for dietary approaches to stop hypertension) which focuses on lowering blood pressure.

If you are on a DASH diet or the Mediterranean diet you are probably eating fruits, vegetables, and low-fat dairy foods, as well as whole-grain foods, fish, poultry, and nuts.  You are also probably consuming olive oil as a substitute for unhealthy vegetable or coconut oils.  Olive Oil, particularly the extra virgin preparation, contains lots of antioxidants (just look at that rich color; it screams anti-oxidants) and also has significant anti-Inflammatory properties. Everyone knows that these are the two most important properties of healthy foods.

Your body clearly benefits from eating olive oil. Does your brain care?

Answering this question is not easy. First of all, olive oil is a complex blend of various chemicals. It would be nice to know which of these is most advantageous and whether they influence brain health directly or indirectly. A recent study attempted to find answers using an animal model that mimics conditions of multiple sclerosis in the human brain. Multiple sclerosis is characterized by brain inﬂammation leading to numerous degenerative changes.

The brain inflammation present in multiple sclerosis patients is thought to be driven by changes in the gut microbiome. Scientists now understand that the gut microbiome plays a signiﬁcant role in both the progression and severity of the disease. This is the likely scenario: an imbalance in the gut bacteria leads to inflammation, chemical debris released from the bacteria migrate out of the gut into the blood and then into the brain. The most harmful of these bacterial debris is called lipopolysaccharide and it can induce a powerful inflammatory response inside the brain. People with multiple sclerosis have elevated levels of lipopolysaccharide in their brains, spinal cords, and blood.

One recent study of olive oil demonstrated potent anti-inflammatory and antioxidant effects. Administering olive oil animals significantly reduced the number of harmful chemicals that can cause tissue injury and aging, particularly within the brain. Olive oil administration also increased levels of the enzymes that provide protection against oxidative damage in the brain and also reduces the negative actions the lipopolysaccharide released by bacteria in the gut. Olive oil also reduced the level of inflammation in the brain.

So, yes, your brain benefits a lot from adding olive oil to your diet and these benefits originate in response to the changes that olive oil makes to your gut microbiome. Olive oil should become a big part of the diet for anyone with an aging brain.

Gary L. Wenk is a professor of psychology and neuroscience at the Ohio State University, a fellow of the American Association for the Advancement of Science, the director of neuroscience programs and a member of the Ohio Medical Marijuana Advisory Committee. He is the author of Your Brain on Food, 3rd Edition, 2019 (Oxford University Press)