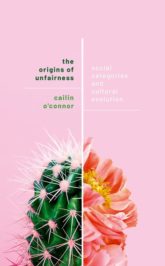 The Origins of Unfairness: Social Categories and Cultural Evolution

What can math tell us about unfairness? Bias, discrimination, and inequity are phenomena that are deeply complex, context sensitive, personal, and intersectional. The mathematical modeling of social scenarios, on the other hand, is a practice that necessitates simplification. Using models to understand what happens in our social realm means representing the complex with something much less complex in order to study it.

Nonetheless, when used carefully models can help us learn about deep patterns related to inequity, including those that govern how unfair norms and patterns of behavior emerge in groups of people.   They are especially useful in highlighting spaces of possibility.   What might happen in the complex dynamics of the social realm?   Once we answer this question, we can use experiments and experimental studies to learn more about these possibilities.

In recent work by fellow modelers and myself, we’ve looked in particular at what minority status means for patterns of unfair behavior.   Suppose you are part of a company where people work together, but are still figuring out some of the social rules for how this is done.  Suppose further that men make up the majority of workers and women the minority.  And lastly suppose, as argued by Cecilia L. Ridgeway in Framed by Gender, that like most humans your coworkers notice gender, and use it to shape their interactions with others in ways that can be subtle (and sometimes not-so-subtle).  In a case like this, even without gender biases coming into play, women can end up disadvantaged.

The basic mechanism for this disadvantage relates to the speed with which people learn to interact with others.  Say that men make up 90% of office workers, and women 10%.   This means that 90% of the time women will be interacting with their “out-group”, while men will be doing the same thing only 10% of the time.  We can reasonably expect that women figure out how to treat men in the office more quickly than the reverse.  This is a general observation about minority status, majority members are, on average, exposed to the other group less, and so learn about them less quickly.

Evolutionary biologists have shown that when it comes to mutualistic interactions between species, sometimes the species that evolves more quickly ends up at a disadvantage simply by dint of this quick evolution.   This is called The Red King Effect.   Surprisingly, starting with the work of Justin Bruner, it has become clear that a similar thing might happen in the cultural realm.  How?

When it comes to joint action – doing a project together, or forming a company, or running a household – a bargain of a sort is needed to figure out who does how much labor, and who gets what rewards.  The bargain need not be explicit, but somehow the issue must be settled.  In general, accommodating demands tend to be safe ones in bargains.  If you accommodate, usually your partner will be satisfied.  When individuals are quickly learning to bargain with another group, this means that in many cases they quickly move towards accommodation.  (Think, “don’t worry, I’ll finish the memo” or “I’ll stay to finish cleaning up”.)  Once this happens, the majority group can more slowly learn to take advantage of this accommodating behavior by demanding a lot of their partners.

Under other conditions, small groups can actually gain an advantage by learning quickly.  This depends on the details of the kind of interaction they are engaged it.   I’ve argued, though, that in many real-world cases we should expect conditions to hold that will disadvantage minority groups, including those with intersectional identities.

Of course, much discriminatory behavior is more nefarious than this.  It often involves racial, gender, or other biases against members of certain social groups.  Given what we’d found in our models, though, my collaborators and I began to wonder whether this simple mechanism – based only on group size and learning speed – could lead to disadvantage for real humans.

We asked experimental subjects to engage in bargaining interactions between two groups.  One group was smaller than the other, but otherwise the two groups were completely identical.  After having the groups learn to interact with each other, we checked to see how much money they had earned through their bargaining.  We found that, on average, the smaller groups earned significantly less, perhaps because of the very mechanism we had identified.  This study is not definitive.  It is relatively small, and involves restrictive lab conditions.  But it points to a general take-away about the use of simplified models to study complex social phenomena.

Without the models we developed to study inequality, we never would have guessed that just being in a small group might be a disadvantage.   There was no a priori reason to test such a hypothesis.  Once modeling work opened up this possibility, though, it gave us reason to experiment.  In general, models can point us to possibilities we might never have imagined without computational resources.  They can tell us what dynamical effects might plausibly occur in the social realm.  Of course, they can’t tell us for sure whether or not these effects are actually at play.  But they can direct us towards empirical work that we otherwise would never  have engage in.  When used carefully, and with the right back and forth with other methods, models are an important part of the social science toolbox, even for topics as complex as unfairness.

Cailin O'Connor is an associate professor of logic and philosophy of science and a member of the Institute for Mathematical Behavioral Science at the University of California, Irvine. She is a philosopher of science and evolutionary game theorist. O'Connor engages in both theoretical and experimental work on topics ranging from scientific communities, to false beliefs, to moral emotions, to signalling. Her recent book The Origins of Unfairness: Social Categories and Cultural Evolution is published by Oxford University Press, 2019.