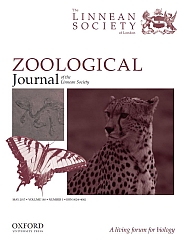 Zoological Journal of the Linnean Society

The Zoological Journal of the Linnean Society publishes papers on systematic and evolutionary zoology and comparative, functional and other studies where relevant to these areas. Studies of extinct as well as living animals are included.

Big cats are the most specialized killers of large prey among carnivorans. Dogs, bears, or hyenas have teeth fit to deal with non-meat food items like bone, invertebrates or plants. Not the cats: In the course of evolution they lost almost all teeth not essential for killing prey or cutting meat. But in the distant past there was a group of cats that went farther down the path of specialization, making their living relatives look like amateur hunters. They were the sabre-toothed felids, members of the extinct subfamily Machairodontinae within the cat family.

A lot of ink has been spilled about the enigmatic extinction of the sabre-toothed felids at the end of the Pleistocene, 10,000 years ago, especially because they were so diverse and widespread until then. But if we consider that many of their prey animals disappeared at about the same time, their demise seems less mysterious, or at least can be seen as part of a bigger mystery: the catastrophic Armageddon that razed the Ice Age megafaunas. Just as intriguing, but more interesting from an evolutionary perspective, is to know how and why the sabretooths developed their spectacular adaptations in the first place.

Like modern cats, the sabretooths reduced their non-cutting dentition, but they developed huge blade-like upper canines, often with serrated margins that cut easily through flesh. The last sabretooth species of the Pleistocene , like the famous Smilodon fatalis from the Rancho la Brea tar pits, had a set of anatomical adaptations that allowed them to use those “knives” with great efficiency, biting in a way quite different from modern cats. Logically, many of these adaptations were located in the skull and mandible, but a long and powerful neck was also essential. Why? Because with such long fangs, the jaws needed to open very widely in order to create enough clearance between canine tips, and at such gapes the muscles that close the mandible couldn’t contract powerfully enough. To compensate, the attachments of their neck muscles were modified, so they could pull down the whole head more efficiently and help drive the canine tips into the prey’s body. Once the gap was reduced, the jaw-closing muscles could contract more efficiently, powering the rest of the bite. The shape of the first neck vertebra was different from that of living cats. It gave the sabretooths the power to sink its teeth into flesh.

Ten million years before Smilodon lived Machairodus aphanistus, an early, lion-sized sabretooth. It became widespread in four continents during the Miocene, but despite being present in many fossil sites, it was traditionally known from fragmentary remains only. Things changed with the discovery of the Spanish fossil sites of Cerro Batallones, Madrid’s answer to California’s Rancho la Brea. Batallones is a carnivore trap, where predators got attracted by the carcasses of previous entrapment victims only to find their own death. As a result, scientists recovered hundreds of complete sabretooth fossils.

This fossil bonanza allowed us to describe the skull of Machairodus in detail some years ago, revealing that many of the anatomical refinements seen in advanced sabretooths like Smilodon were absent in the earlier cat, whose skull resembled those of the living big felids,   even though its upper canines were already elongated, flattened and serrated. But what about its neck? Was it long and powerful with a modified atlas, as in Smilodon, or shorter like those of extant felines? The answer is: neither of the above!

It appears that the neck of Machairodus was long, flexible and strong like that of Smilodon, but its atlas was not specialized and resembled that of living cats. What is the meaning of this odd combination? It is an example of evolution in mosaic, meaning that some of the adaptations typical of a group of animals appear early in the history of the lineage, but others take much longer to evolve. This contradicts our intuitive perception of organisms as perfectly adapted to their ecological niche, but instead shows evolution as a process where nature uses the available materials to come up with the best solution possible. And the best solution possible is not perfect, just good enough for organisms to remain competitive.

The early history of sabretooths is thus revealed as a complex process. The key change that triggered their evolution was the development of their namesake upper canines, which allowed them to kill large prey rapidly by cutting their throats and causing massive blood loss and a quick death. Even in a cat like Machairodus that lacked many of the refined adaptations of its later relatives, just deploying its deadly canines put it ahead of its competitors. Its primitive atlas may not be ideal to contribute to the downward pull of the head needed to sink the sabres, but the long and powerful neck provided for a precise aim and kept the head firmly in place during the violent bite. Evolution is unforgiving with maladaptive mutations, but it allows imperfection all the time, and the slightest advantage is enough to keep participants in the competition. In the Miocene of Spain, knives were out for the prey, and the predator race went on.

Featured image credit: A life reconstruction of the sabre-toothed felid Machairodus aphanistus hunting a horse of the genus Hipparion. The predator uses its long neck to achieve a very precise bite at the throat of its prey. Artwork by Mauricio Anton. Used with permission of the artist.

Dynasties: tigers and their solitary homes