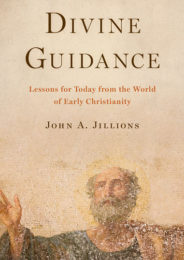 Divine Guidance: Lessons for Today from the World of Early Christianity

More than a third of all millennials now consider themselves atheist, agnostic or “religiously unaffiliated.” But this doesn’t mean that they have all given up on spiritual life.  Some 28% of the unaffiliated attend religious services at least once or twice a month or a few times a year (and 4% go weekly). 20% of them pray at least daily, and 38% pray monthly or weekly. We may be entering a new age in which skepticism toward religious institutions is curiously accompanied by more trust in ones own experience of God.

If you are troubled, perplexed or alarmed by religion but still have stirrings of spiritual life, you are in good company with skeptics of the ancient Roman world. They were vigorous contributors to the debates about God that roiled the first century and helped shape Judaism and early Christianity.

Lucretius (c. 99-55 BCE) was the most influential Roman Epicurean. On the Nature of the Universe is a long poem written with missionary zeal dedicated to the overthrow of popular religion.  In Lucretius’ view intelligent society should have no place for providence, divine intervention, fate, immortality of the soul, and religious rituals. Religion was an invention that kept human beings enslaved to superstitions by playing on their anxieties, desires, fears, and ignorance. Everything we need to know is found in nature and comes through the physical senses alone. We should thus abandon religion, develop our sense of wonder and dedicate ourselves to simple virtue, for as Lucretius writes in On the Nature of Things, “…True piety lies rather in the power to contemplate the universe with a quiet mind.”

Cicero (106 —43 BCE) was equally troubled about popular piety and wrote three books against deformed religious beliefs: On the Nature of the Gods, On Fate, and On Divination. But unlike Lucretius he made a clear distinction between practice and belief.  Active involvement in religious life was fine, but only out of respect for cultural tradition, state order and “the opinion of the masses.”  You don’t have to actually believe in it. Even so, Cicero was unwilling to jettison God. He writes in On Divination, “…The celestial order and the beauty of the universe compel me to confess that there is some excellent and eternal Being who deserves the respect and homage of men.”

Seneca (c. 4 BCE—65 CE) goes further. He thinks it is dishonest to cherish the god of the philosophers while outwardly maintaining false religion—even for reasons of state and pandering to the masses. He argues instead for a philosophical commitment to the divine, but without the trappings of religion.  He believes in a kind fate whose ways—for now—are unknown and simply require peaceful acceptance of whatever happens. If you accept with equanimity the good, bad or indifferent you will be on the way to that harmony of inward and outward being that is the goal of human life.

Epictetus (c. 55—135 CE) taught that reason, self-reliance, self-restraint and recognizing what we can and can’t control are the keys to happiness and freedom.  He doesn’t deny divine guidance, but says that God rejects the prayers of those who won’t take action to help themselves or others.

For Plutarch (c. 46—120 CE) what is most disturbing about popular religion is its exploitation of fear. In On Superstition, he says: “The atheist thinks there are no gods; the superstitious man wishes there were none, but believes in them against his will, for he is afraid not to believe…The superstitious man by preference would be an atheist, but is too weak to hold the opinion about the gods that he wishes to hold.” Plutarch has no trouble understanding why thoughtful people would rather be atheists. The gods themselves might prefer to have their existence denied than to have their character maligned by superstitious fear.  For him this kind of religion is worse than atheism.  He spent the last thirty years of his life serving as a priest at Delphi and was very well aware of the abuses of religion. Yet Plutarch refuses to throw away faith, and is saddened that so many have no awareness of God’s presence. Also in On Superstition, he says: “It is as if the soul had suffered the extinction of the brightest and most dominant of its many eyes, the conception of God.”  For Plutarch, true piety lies in rejecting both extremes of credulity and atheism, and pursuing the middle way that brings rational and mystical together.

Roman thinkers, Jewish tradition, and early Christian experience converged in spirited debate about divine guidance in the first century. Whatever the deformations of religion, evidence of love, beauty, and truth compelled these people –and many today as well—to reckon with their source.

John A. Jillions is the author of Divine Guidance: Lessons for Today from the World of Early Christianity. He is an associate professor of religion and culture at St. Vladimir’s Orthodox Theological Seminary and an adjunct professor at Fordham University.