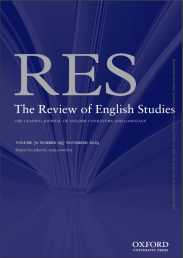 The Review of English Studies was founded in 1925 to publish literary-historical research in all areas of English literature and the English language from the earliest period to the present. From the outset, RES has welcomed scholarship and criticism arising from newly discovered sources or advancing fresh interpretation of known material. Successive editors have built on this tradition while responding to innovations in the discipline and reinforcing the journal's role as a forum for the best new research.

Despite his foundational status in today’s academy, William Shakespeare was not particularly welcome in the early modern English universities. In the 1570s and 1580s, just as the commercial playhouses were gaining steam in London, the authorities of both Oxford and Cambridge Universities enacted statutes banning “common stage players” from performing within university precincts. Chancellors lacked the jurisdiction to prevent theatrical performances in the university towns, and we know that performances (probably including some from Shakespeare’s troupe) happened at local inns like the still-functioning King’s Arms in Oxford. But the authorities threatened students who attended with imprisonment, and they would sometimes even pay professional players to leave Oxford and Cambridge so that they wouldn’t cause “annoyance” to any scholars.

The same attitude existed toward printed editions of Shakespeare’s plays. The founder of the Bodleian Library, Thomas Bodley (1545-1613), instructed his first librarian that contemporary drama should be kept off the shelves. Fellows likewise excluded Shakespeare from the classroom, prioritizing ancient Greek and Roman drama over the plays that were being produced for the London commercial stage. Contemporary poetry, although not quite as unsuitable as the drama, did not fare much better: educators favored classics like Ovid’s Metamorphoses and Homer’s Iliad over Shakespeare’s Venus and Adonis.

Yet there is evidence to suggest that Shakespeare’s works were thriving at early modern Oxford and Cambridge. The Oxford scholar Robert Burton (1577-1640) owned copies of Shakespeare’s narrative poems, Venus and Adonis and The Rape of Lucrece, which today are held in the Bodleian. The Cambridge scholar Gabriel Harvey (1552/3-1631) noted in his copy of Chaucer that “the younger sort takes much delight” in Venus and Adonis, while The Rape of Lucrece and Hamlet “please the wiser sort,” indicating his familiarity with and appreciation for Shakespeare. An academic clergyman named Nicholas Richardson even used one of Juliet’s speeches from Romeo and Juliet in a sermon that he preached at the university church in Oxford in 1620 and 1621.

The greatest insight into Shakespeare’s reputation among students and scholars comes from an underappreciated aspect of early modern university culture: academic drama. From the outset of the sixteenth century, students at Oxford and Cambridge performed plays in college chapels and dining halls, the majority of which were in Latin and on classical or biblical themes. By the close of the century, however, students were mounting productions of original plays in the vernacular. Two of these productions, both by anonymous (but certainly academic) playwrights, provide particularly vivid snapshots of the interests and concerns of the students onstage and the collegiate community for whom they were performing: the Parnassus trilogy, performed at Cambridge between 1598 and 1601, and Narcissus, performed at Oxford in 1602.

The modern resonance of the Parnassus plays is difficult to miss, as two undergraduate protagonists, Philomusus and Studioso, struggle after graduation to find any practical use for their liberal arts degrees. At one point they attempt to be professional performers, auditioning for the early modern actors Richard Burbage and Will Kempe, who appear as characters in the trilogy’s third installment. During the audition, Burbage comically asserts that Philomusus’ “face and the proportion of [his] body” would be right for playing Richard III, and Burbage asks him to “act a little of it.” Philomusus immediately launches into the opening speech from Richard III: “Now is the winter of our discontent / Made glorious summer by the sonne of Yorke.” Professional players were strictly banned from university precincts, but the Parnassus playwright brought them to life inside the walls of St. John’s College, Cambridge, animating two prominent members of Shakespeare’s troupe in front of a university audience. This is also a major moment in the history of student performance, representing the earliest known instance of Shakespeare’s words being performed before a live audience in an academic setting.

The Parnassus plays confirm Shakespeare’s presence within the university sphere. They also suggest that the students involved in broadcasting his words through performance were key to establishing him as a “classical” author, as valuable as the ancient authors whose stories usually served as the basis for academic plays. Further evidence appears in Narcissus, a Twelfth Night Merriment performed by the students of St. John’s College, Oxford. The Prologue claims that the play is taken from the Metamorphoses, and much of its content is indeed translated directly from Ovid’s Latin text. But Narcissus borrows substantially from Shakespeare as well. In her 1893 edition of the play, Margaret L. Lee notes a number of compelling parallels with Shakespeare’s Henry IV, Part 1, suggesting that the academic playwright (or playwrights) who wrote Narcissus had probably gotten his hands on the 1598 quarto. Shakespearean texts were not only in circulation among the scholarly community, but were also viewed as sources worthy of imitation.

Narcissus’s greatest Shakespearean debt is to A Midsummer Night’s Dream, and more specifically to the Pyramus and Thisbe episode, to which the academic play explicitly alludes. The action of the play revolves around this Shakespearean episode, as a character called The Well places a bucket as a comically over-explained representation of the body of water in which Narcissus will find his reflection—just as Shakespeare’s Rude Mechanicals ask their audience to imagine Wall and Moonshine with, respectively, a person and a lantern. Narcissus may be based on an Ovidian story, but the manner of its portrayal—and the comic value that the playwright draws from it—is taken from Shakespeare, who has quite literally supplanted his classical forebear in the collegiate setting.

In a recent monograph, Jonathan Bate writes that the greatest factor in Shakespeare achieving “classical” status was “his introduction into the educational system.” That introduction took place far earlier than scholars have realized. The process did not begin with academics in the centuries following Shakespeare’s death. It began with students performing original plays during Shakespeare’s lifetime.

Daniel Blank is a Junior Fellow in the Harvard Society of Fellows. His main research interests include Shakespeare and early modern drama. His published work has appeared in Renaissance Quarterly, Renaissance Studies, and The Bodleian Library Record. Read his latest article, "'Our Fellow Shakespeare': A Contemporary Classic in the Early Modern University," in The Review of English Studies.

To you I owe the most: tales of debt from Shakespeare’s England to the present day