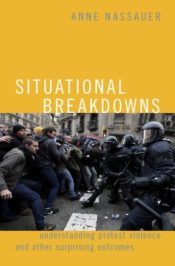 Watching the news, violence seems on the rise all around us. Most Americans think crime is going up, have a pessimistic outlook of the future, and feel increasingly unsafe. As a result, people accept more and more surveillance to protect themselves from violent and criminal behavior. Surveillance cameras are installed with the assumption that we need to fear each other and be vigilant of the potential predator next door. Mobile phones are increasingly used to capture violent events – the crazy brawl unfolding right in front of our eyes that will later go viral on YouTube or Facebook and make people think “oh my, it’s getting worse every day.” And in a vicious cycle, the more such footage we have, the more we see violence on the news: a large brawl in London, a brutal assault in Glasgow, a shooting in New Jersey, a mass murder in Dayton, violent unrests in Hong Kong or Paris. Again, such news reassure us that humanity is becoming crueler, more violent, more dangerous. Yet, a systematic look at the same video data suggests quite the opposite. On many levels, we can, in fact, be optimistic. How so?

Today, videos from closed-circuit television, body cameras, police dash cameras, or mobile phones are increasingly used in the social sciences. For lack of other data, researchers previously relied on people’s often vague, partial, and biased recollections to understand how violence happened. Now, video footage shows researchers second-to-second how an event unfolded, who did what, was standing where, communicating with whom, and displaying which emotions, before violence broke out or a criminal event occurred. And while we would assume such footage highlights the cruel, brutal, savage nature of humanity, looking at violence up-close actually shows the opposite. Examining footage of violent situations – from the very cameras set up because we believe that violence lurks around every corner – suggests violence is rare and commonly occurs due to confusion and helplessness, rather than anger and hate.

Armed robberies are an example in point. We would assume robbers to resort to violence if clerks fail to hand over what is in the register; after all, that is the fundamental proposition of the situation. Instead, video surveillance shows that robbers become afraid of the unexpected situation they are in and run away. It shows that criminals, like most people, rely on situational routines that offer familiarity and reassurance. In my research of surveillance footage of robberies clerks laughed at a robber’s assault rifle, and robbers, rather than shooting or hitting the victim, were startled and gave up. When a robber showed slight gloominess, a clerk cheered him up and the robber became even sadder, discussed his financial problems with the clerk and left. If clerks treat robbers like a child, surveillance footage shows how robbers may react according to this role and become hesitant and plead to be taken seriously. This means even in an armed robbery, where perpetrators are prepared and committed to the crime and clerks usually fear for their lifes, robbers as well as clerks tend to make sense out of the situation together, avoid violence and get into shared rhythms and routines.

We can see similar patterns when looking at video recordings of protest violence and violent uprisings. In some protest marches, certain groups attend with the clear goal to use violence; they mask up and come prepared with stones to throw at police. In other protests, police decided on a zero-tolerance strategy and plan to use force at the slightest misstep by activists. Despite such preparations for and willingness to use violent means, violence rarely actually breaks out, and people usually engage in peaceful interactions. If violence does erupt, we see that it does so not because people are violent or cruel, but because routine interactions break down, which leads to confusion, distress, uncertainty, anxiety, and fear, and ultimately violent altercations.

Similarly, research on street fights, or mass shootings shows that most people that have the will to fight and kill are actually bad at “doing” violence –as are the great majority of humans. Only very few people in very specific situations manage to be violent effectively, and it is those outliers that make it to the news. Contrary to common belief, rates of violence and crime have never been as low in most Western countries, as they are today.

Such findings have implications; fear of people’s cruel nature and violence lurking around every corner perpetuate everyday actions, drive voting behavior, and impact policymaking through worst-case-scenario thinking. Fearing fellow humans as inherently violent and cruel not only lacks empirical grounding, but research also shows it leads people to make bad decisions. Surveillance videos and recent research on violence challenge this notion that we need to fear each other. They counter the idea that we need elaborate protection from each other and constant state surveillance, which not only tends to cost public funds but also often curtails civil and human rights (e.g., privacy, free speech, free movement, right of asylum). The optimistic outlook offered by scientific analyses of videos might mean we can spend our time more wisely; instead of fearing each other and investing time and resources to protect ourselves from exaggerated dangers, we could enjoy society and our remaining civil rights and freedoms a little more.

Anne Nassauer is Assistant Professor of Sociology at the John F. Kennedy Institute for North American Studies at Freie Universität Berlin. Her research focuses on violence and deviant action, collective behavior, and the use of video data for scientific inquiry.