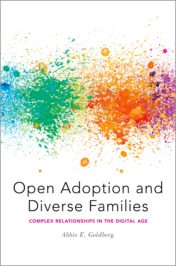 The term “open adoption” is unfamiliar to much of the general public, and yet it describes the reality of adoption today. These are adoptions in which there is some contact or exchange of information between birth families and adoptive families, before or after the adoption. With growing awareness of the benefits of openness for children and families, the vast majority of adoption agencies—95%—do not facilitate closed adoptions (the old adoption arrangements, where no identifying information was shared between adoptive and birth families).

Historically, many people have surmised that a clean break between adopted children and their birth families enables both parties to move on. We now know that is not true. Openness benefits kids by providing them with biological continuity and not denying them the truth of their origins and background, thus aiding in identity development. It benefits birth parents as well. Given that birth parents are unlikely to forget the children they place for adoption, openness may help to alleviate their pain and guilt. For adoptive parents, openness can ease fears and questions, reassuring them about the permanency of the adoption, and promote empathy toward the birth parents.

It was research on the benefits of open adoption—and the downsides of closed adoptions—that, over time, moved adoption agencies to gradually shift their practices towards that of facilitating open adoptions. So what does open adoption look like in practice?

The realities of open adoption are complex. Some adoptive and birth families exchange basic information through the adoption agency, either before adoption or on an ongoing basis. No information is shared directly between parties. Adoptive parents send photos and updates to the agency, which pass these on to birth families, who can respond in kind—again, through the agency. Other families have direct contact with one another. Contact of any type may range from fairly regular and frequent to infrequent.

Among families who are initially hesitant about the idea of open adoptions, most ultimately embrace it, as they grow to understand and appreciate the benefits of openness—and to view it as less unfamiliar and scary. Far more common than stories of adoptive parents who wish for less contact are stories of adoptive parents who long for more contact, especially over time, as their children grow older. Indeed, sometimes birth parents drop out of contact (due to mental health, substance abuse, or housing issues, or pain and loss associated with the placement), and this is typically very challenging for adoptive parents, who recognize that the birth parents’ presence (or absence) would likely become more significant for their children over time—not less.

As one lesbian adoptive mom, Mariette, puts it: “It’s been very disappointing for me because we did an open adoption and we really wanted there to be more of a connection.” A heterosexual adoptive dad named Matt describes how his 8 year-old son was struggling with a loss of contact with his birth mother: “That realization of, ‘Why doesn’t she want to have contact with me?’ We’re getting those questions now. We tell him, ‘We wish we had contact with her too.’ Recently we’ve been involving him in the letters that we send to her. We ask, ‘Is there anything you want to add?’”

Family relationships are complex—and those between adoptive families and birth families are no exception. Sometimes adoptive parents express sadness or even frustration with birth parents—such as surrounding their ongoing mental health or substance abuse struggles, which are often among the issues that had led them to make an adoption plan in the first place. Yet alongside feelings of sadness, disappointment, or frustration, these adoptive parents are often also deeply committed to and appreciative of their children’s birth parents, recognizing all that they are up against and continuing to value them their children’s first, and birth, parents. Deb, a lesbian adoptive mother, has a particularly nuanced set of feelings about her daughter Marlo’s birth parents, explaining that,

“The fact [is] that they have certain issues that might impact their ability for a healthy relationship with Marlo [child]. That’s part of why they chose us to raise her. I think there will be some sad lessons ahead, but I think one thing that makes it easier is their decision to place her with us was a decision made out of love. They loved her.  . .and they made one of the toughest decisions of their lives. We feel that every time we talk with them in person or on the phone; you can feel that pain still. It’s awful to witness and it must be horrible to feel, but that pain comes from the fact that they do love her. If we can help her know that they love her, that she wasn’t abandoned, that would be one of the greatest gifts I think we could give her”.

Deb’s quote illustrates what so many stories reveal: the power of acknowledging, in all its complexity, the pain and the beauty in adoption. Open adoption, in its best sense, means acknowledging and embracing complexity, rather than wishing it or willing it away. It means a both/and perspective, not an either/or perspective. It means staying present to loss—and inviting in connection. It means doing family in a way that is authentic and real, and not the stuff of storybooks. All families are complex. Families in open adoptions are perhaps especially complex—and, in an ideal world, deeply aware of and in conversation with that complexity.

Abbie E. Goldberg, PhD, is a professor of psychology at Clark University. She is the author of several books on adoption, including Open Adoption and Diverse Families (OUP 2019), LGBTQ Divorce and Relationship Dissolution (OUP 2018,) and Gay Dads: Transitions to Adoptive Fatherhood (NYU Press 2012). You can follow her on twitter @DrAbbieG.