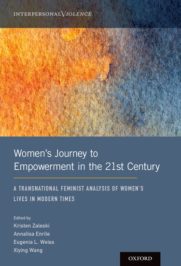 Women's Journey to Empowerment in the 21st Century

In case you haven’t been paying attention, the intersection of sexual violence and technology has become an invisible tidal wave heading for the shores of our smart phones. Revenge porn – academically known as image-based abuse, non-consensual pornography, or the non-consensual sharing of intimate images – is one of a host of cyber-sexual violations clustered as technology-based sexual violence.  The most popular cases in the United States press show how wide the epidemic has spread. Celebrity scandals like the one involving Blac Chyna, Congressional hearings on its presence in the United States Military, and a recent filing with the United States Supreme Court about the dating app, Grindr, and its responsibility in the harassment of an man whose ex-boyfriend impersonated him and sent over 1,400 Grindr (as many as 23 a day over 10 months) users to his house and work for violent, and forced, sex, are just a few examples.

Sexual trauma in face to face violence has decades of research showing a cluster of symptoms that most survivors have in common, including confusion, changes in sleep and eating patterns, nightmares, and a heightened startle response in the short term that will prevent them from engaging socially. Longer term symptoms include post-traumatic stress disorder (PTSD), depression, and anxiety. Are these symptoms the same for victims of image based sexual abuse? We don’t really know for sure.

The mental health community is just starting to understand the short and long-term outcomes of being victimized online. Most studies have shown that survivors victimized online have significantly worse “mental health outcomes” and “somatic symptoms” than those who have never been victimized online.  One researcher interviewed 18 women in Canada who were sexually victimized online and discovered PTSD, anxiety, depression, suicidal thoughts, and trust concerns. Research by the Cyber Civil Rights Initiative uncovered a prevalence of suicidal thoughts while other research has found that victims of non-consensual image sharing often experience debilitating levels of shame and humiliation along with reduced self-esteem.

What can we do in the meantime? One is to educate ourselves.  Talk to our friends, students, therapists, and professors about these types of crimes. Another is to support one another in efforts to prevent this nature of victimization from spreading. If someone tells you they have been victimized in this way, believe them, listen to them, and help them feel safe in whatever way that means for them (both digitally and privately in their community). Nobody has to go it aloneFF.

Together we can all push back against the tide of image based sexual abuse and digital victimization, and hopefully prevent the scurrilous mental health impacts that come with it.

Kristen Zaleski, PhD, MSW, is clinical associate professor in the Suzanne Dworak-Peck School of Social Work at the University of Southern California. Her decade-long work with sexual assault survivors spans inpatient and outpatient settings, and she has a dual specialty in civilian and military sexual trauma. Dr. Zaleski has published research on treatment for sexual assault-related post-traumatic stress disorder as well as sexual violence and rape culture in digital realms. She is the lead editor of Women's Journey to Empowerment in the 21st Century available now from Oxford University Press.

Happy, healthy, and empowered in love