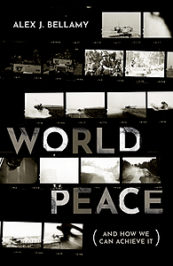 World Peace (And How We Can Achieve it)

The United Nations’ International Day of Peace is celebrated on 21 September each year, marking efforts to bring the world closer to a state of harmony and further away from violence. Here are some surprising facts about peace and the quest to achieve it:

1. Peace is more common than we think.

Through the course of human history, most societies have enjoyed peace, most of the time. In fact, some societies have avoided war altogether or for very long periods. One study found that a tenth of societies never experienced war and over half experienced it only once a generation.

2. In the twenty-first century, most regions of the world are more peaceful than they have been for generations – if not ever.

Humans alive today are less likely to die as a result of wars or atrocities than their parents or grandparents. War in East Asia is at its lowest point in centuries and has been for nearly three decades. War is almost extinct in the Americas, Caribbean, and western Europe. It is now uncommon in eastern Europe, southern African and increasingly in coastal west Africa.

3. The search for peace is as old as war itself.

For as long as there has been war, there have been people trying to find ways of resolving disputes without it. The very first human story written down, the epic of Gilgamesh (c. 1500-2000 BCE), recounts how this King of Uruk learns that war and conquest cannot give him immortality. Gilgamesh finds meaning in life by becoming a wise and just king and abandoning the wanton violence of his past.

4. Aggressive war was prohibited by international law in 1945.

Governments have a legal obligation to not use force against others. This obligation is written into the Charter of the United Nations. There are only two exceptions: self-defence and operations authorised by the UN Security Council. The crime of aggression is now recognized by the International Criminal Court, which means that political leaders might one day be prosecuted for launching wars.

Peace and economic development go hand in hand, as does war and economic decline. As a basic rule of thumb, societies become less prone to experiencing civil war the wealthier they become. That is not to say that middle income countries never experience civil war, just that it is much rarer. There is also a connection between the level of economic inequality and a society’s risk of mass atrocities. War on the other hand tends to have a significant negative impact on economic development. It is no coincidence that the greatest declines in war have come in places experiencing significant economic improvements.

A large body of academic work demonstrates that UN peacekeeping operations help prevent wars, shorten wars, limit civilian suffering, and reduce the likelihood of war recurring. It also shows that quantity has a quality all of its own. The greater the number of peacekeepers deployed, the greater these positive effects tend to be.

8. We spend much more on war than we do on peace.

Despite clear evidence that conflict prevention, peacekeeping, humanitarian action, and peacebuilding have positive impacts, these activities are all under-resourced. Global spending on arms is approximately $1.8 trillion. It is estimated that annual cost of war is around $1trillion. By contrast, the entire UN system – its peacekeeping operations, humanitarian programs, development work and much else, costs around $50billion a year – a tiny fraction of what is spent and lost on war. The result is that peacekeeping missions often lack the troops they need, humanitarian aid is rarely sufficiently funded, and basic functions like mediation lack guaranteed funding.

It is estimated that annual cost of war is around $1trillion. By contrast, the entire UN system – its peacekeeping operations, humanitarian programs, development work and much else, costs around $50billion a year – a tiny fraction of what is spent and lost on war.

There was one in 1915 too. Despite the best efforts of commanders on both sides, on Christmas Day 1915 soldiers of the 15th Battalion Royal Welch Fusiliers left their trenches to exchange gifts and play football with German soldiers. Their commanding General demanded they stop and threatened to court-martial all involved. British artillery fired warning shots. But when the General left the frontline, the soldiers went back into no-man’s land to talk and sing together.

The Peace One Day initiative, launched twenty years ago at London’s Globe Theatre, is a campaign to make The International Day of Peace, 21 September, a day that is truly without war. If peace can be achieved in some places where war once reigned, as in Western Europe for example, then there is no reason why it cannot be achieved in all places. One day of peace may not be much. But it is a start that would show that world peace is possible.

Alex J. Bellamy, professor of peace and conflict studies and director of the Asia Pacific Centre for the Responsibility to Protect, the University of Queensland, Australia