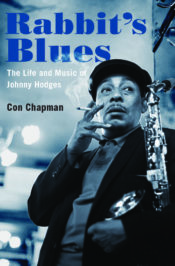 Rabbit's Blues: The Life and Music of Johnny Hodges

Over the course of four decades, Cornelius “Johnny” Hodges became the most famous soloist in the Duke Ellington orchestra, and the highest-paid. His pure tone on the alto saxophone was his calling card, and he used it both on lush, romantic ballads and on bluesier numbers that kept the band grounded in the music of dancehalls even as Ellington strove to produce symphonic works of the highest order in an American idiom.

Hodges has faded into relative obscurity, eclipsed by the genius of Charlie Parker, the father of bebop who—unfortunately for Hodges—not only created an entire new school of jazz, but played the same instrument as he did.

Hodges was, his own worst enemy when it came to preserving his legacy. He rarely agreed to interviews and usually cut them short when he did, rising and saying “Young man, I’ve got to go” to frustrated reporters. Here are seven things that you probably don’t know about Johnny Hodges, who was at one time one of the three most famous saxophone players in the world:

Like many boys named “Cornelius” (I am one) he probably found it a playground burden and adopted his father’s name.

The first, in 1944, was a civil ceremony in Chicago, where the waiting period was only twenty-four hours; the second, in 1968, was a Catholic ceremony in New York. The latter renewal of vows was no doubt done at his wife’s insistence; Johnny doesn’t seem to have been religious, and his funeral was held at the Harlem Masonic Lodge, where the rule is that members don’t discuss politics or religion.

The area, and its successor to the south, was referred to as a “combat zone” because of the number of soldiers and sailors who would flock there for risqué entertainment. Hodges had a daughter by a dancer he met there while still in his teens, but never married the girl’s mother.

4. When he first started playing tea dances professionally in Boston, he was so young he needed to be accompanied by a guardian in order to comply with legal requirements.

“Tea dance” was frequently a euphemism; often liquor was served at such affairs despite their genteel name.

5. When he first arrived in New York he played in dancing schools, which in some cases were pretexts for more intimate encounters than the fox trot.

As fellow sax player Benny Waters put it, “Every dancing school had its girls. There was no law

against a beautiful girl taking someone out after work. A guy could certainly date a woman in a dancing school for after work.”

6. He was on the road so much he missed the wedding of his daughter Lornar, a failure that the daughter (by his second wife) understandably resented.

He had a closer relationship with his son John, who played drums and sometimes substituted when a regular drummer didn’t show at a gig due to missed travel connections.

7. He used at least four pseudonyms to avoid contractual restrictions and earn money on the side by performing on other musician’s albums.

He was known by seven different nicknames, including “Rabbit,” “Jeep,” and “Squatty Roo.” He was a short man, only about 5’ 5”, and perhaps as a result became the object of the affectionate put-down that an enduring nickname provides.

Hodges was a musical man of mystery, but he could be instantly identified by that most ephemeral of things; a single musical note, one of the few musicians in the history of jazz about whom that could be said as anything other than sheer hyperbole.

Con Chapman's work has appeared in The Atlantic, The Boston Globe and The Christian Science Monitor, and his writings on jazz have appeared in The American Bystander, The Boston Herald and Brilliant Corners. He is the author of two novels, thirty-two stage plays, fifty books of humor, and The Year of the Gerbil, a history of the 1978 Red Sox-Yankees pennant race. He is the author of Rabbit's Blues: The Life and Music of Johnny Hodges.