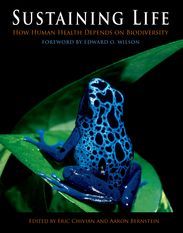 Among the great lies I learned in medical school was that a human being was the product of a sperm and an egg. Yes, these gametes are necessary, but they are hardly sufficient to create and sustain a human life. Each one of us stays alive only with the help of trillions of other organisms – the human microbiome – that live on and in every surface of our body exposed to the outside world. Of all the cells that comprise a human body, only two-thirds derive from a sperm and an egg.  We can see inklings of what a massive disruption to our relationship with the  microorganisms that live within us means to health with the overuse of antibiotics. Antibiotic disruption can foster antimicrobial resistance, weight gain, autoimmune disease, and even perhaps mental health disorders.

Our relationships with other creatures are just as important, especially considering the ongoing and rapid decline in biodiversity. A recent U.N. report emphasized the current rate of species loss is unprecedented in human history and that as many as 1 million species are at risk of extinction. Anyone can quickly discover that life-saving bonds connect us with other species. Take food, as an example. While domesticated food crops are hardly at risk of disappearing, other plants and animals are and can be just as important to keeping us alive.

If your health depends on a medicine, there’s a good chance that the medicine wouldn’t exist had it not been given to us from nature. This is true for medicines that have been around for a long time, such as aspirin and most antibiotics, but also for new ones as well. All told, nearly two-thirds of new drugs approved by the U.S. Food and Drug Administration between 1981 and 2014 derive in one way or another from natural products. Many of these new drugs, including the anticancer agent trabectedin and pain reliever ziconotide, come from species that depend upon threatened habitats such as mangrove forests and coral reefs. In the ongoing battle against cancer and chronic pain, finding medicines that work in new ways is a major win. The heavy dependence of drug discovery on natural products makes clear that when we lose species, we may kill off potential treatments for presently incurable diseases.

Upheaval in nature also can influence the diseases we may need to treat, especially infections. Many of the fearsome infectious epidemics in recent years have resulted because of altered relationships between people and other life forms. The first known epidemic of Nipah virus, which can kill 80% or more of people infected, occurred in Malaysia in 1999. The epidemic occurred because bats, which harbored the virus, were lured to mango trees planted next to industrial-scale pig farms. The bats, through their feces, infected the pics, and the pigs transmitted the disease to humans. Subsequent epidemics have occurred in other nations from bats contaminating date palm sap collected in buckets that were attached to trees to harvest syrup for human consumption. Another highly lethal virus, rabies, has also been fuelled through disruptions of relationships. Rabies cases in India have been fuelled by a mass die off of vultures. The vultures were poisoned by diclofenac, an anti-inflammatory drug similar to ibuprofen, that the vultures consumed when they fed on dead cattle which had been given the drug to keep them mobile just prior to death. Feral dogs, some of whom had rabies, filled the scavenger void left by the vulture deaths. A broader look at emerging infections shows that about three quarters of emerging infections in recent decades have entered human populations from other animals, and predominantly from wild animals. Humans swim in a common germ pool with other animals. Habitat degradation or outright habitat loss can spur wildlife migrations, and combined with a growing, more urban and mobile human population, can be a recipe for greater disease emergence.

The medical truth is that establishing enough room for nature to thrive and protecting relationships with other species are vital for our health. Of course, not all species benefit humanity but consider that only a few – perhaps a few thousand – out of millions pose any real threat to our own, and the folly of the present extinction spasm, as the preeminent biologist E.O. Wilson calls it, for our own species becomes clear.

Wilson has urged that we set aside half of the earth’s land surface to do this. Only about 15% is protected today. Such an investment in conservation of life on earth may ease pressure on the human-animal encounters that promote infectious epidemics. It also can secure the vast treasure trove of secrets still hidden in life forms known and yet undiscovered that can provide clues to diagnose and treat presently mysterious or incurable diseases. Perhaps above all, though, protecting nature can secure our minds and souls. Abundant evidence confirms what anyone who’s intimately known a piece of nature has known forever: exposure to nature can soothe our minds and provide an irreplaceable sense of belonging to this world.

Aaron Bernstein, MD MPH is co-Director of the Center for Climate, Health and the Global Environment at the Harvard TH Chan School of Public Health, and a pediatric hospitalist at Boston Children’s Hospital.