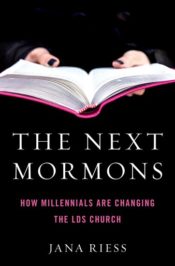 The New Mormons: How Millennials are Changing the LDS Church

A decade ago, the Church of Jesus Christ of Latter-day Saints was licking its wounds after its disastrous involvement in California’s Proposition 8. The church had won a coveted victory—Proposition 8 passed, effectively outlawing same-sex marriage in the state—but lost the war of public opinion. When Americans found out that Mormons had funded an estimated 50%–70% of the $40 million raised to support Prop 8, despite comprising less than 2 percent of California’s population, there was a public outcry. “Mormon” became equivalent in the public eye to “homophobic.”

Fast forward to this year’s commencement season, when a Brigham Young University graduate gave a speech that was widely heralded for its courage and honesty. Political science valedictorian Matty Easton challenged decades of the church’s teachings that homosexuality was a sin someone chose, rather than an orientation that was part of their makeup, as he publicly came out as gay.

“I’m coming to terms not with who I thought I should be, but who the Lord has made me be,” he said. “As such I stand before my family, friends and graduating class today to say that I am proud to be a gay son of God.”

What changed? What has happened in Mormonism in the last decade to make it possible for a gay student to proudly proclaim that his homosexual orientation is divinely inspired, even if the church-owned university he attended still won’t let him so much as hold hands with a man?

Not the leadership. The LDS Church’s hierarchy is essentially a gerontocracy, with the top fifteen leaders—all men—generally appointed in their sixties and holding their posts until death. Instead, society changed—rapidly—while the church’s leadership has struggled to keep up. In 2007, according to Pew research, Americans were exactly divided on whether homosexuality should be accepted or discouraged by society. In other words, Mormons were far from alone in supporting measures like Proposition 8 in 2008. But by 2014 when Pew repeated its study, 62% of Americans had tilted toward support, and it has climbed every year since. 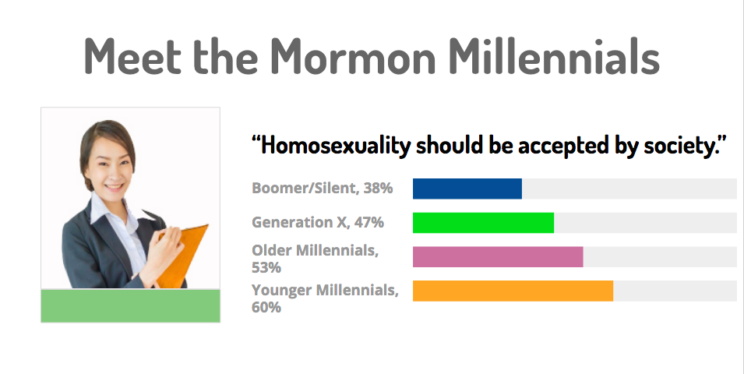 That change is occurring among Latter-day Saints as well. Support for homosexuality and same-sex marriage is markedly lower among Mormons than in the general population, but there’s a clear generational shift at work. For example, only 38% of Boomer/Silent Mormons (those ages 52 and older in 2016) agreed that homosexuality should be accepted by society, but 60% of Mormons in the 18–26 age group said it should. Younger Mormons are more socially conservative than other Millennials their age, but not as conservative as their Mormon parents and grandparents.

They’re also more sexually diverse. Only 2.6% of older Mormons who remain affiliated with the church report being anything other than heterosexual, or about one in thirty-eight. In contrast, roughly one in ten Millennial Mormons is nonheterosexual, mirroring patterns in the general population. For young adult Saints, bisexuality is the most common minority orientation (7%), followed by homosexuality (2%) and “other” (1%).

So when Mormon leaders make statements about homosexuality today, they do so in a climate that has shifted dramatically in a short period of time. Many Mormons feel differently about homosexuality than they did a decade ago, and more younger ones are embracing a nontraditional sexual identity—with pride.

What’s more, the church’s stance on LGBT issues has proven a “wedge issue” in whether young people—even those who are not LGBT themselves—want to stay Mormon. The third-most-cited reason that Millennial former Mormons gave for leaving the church was the institution’s position on LGBT issues. For older former members, it did not even rank in the top ten.

The church is now attempting to navigate a tricky position in which it continues to hold the line on same-sex marriage (still teaching that it is a sin, but no longer investing in political campaigns against it or forbidding children of same-sex couples from getting baptized) while cracking the door for greater acceptance of LGBT members. And younger Mormons are often leading the way.

Jana Riess is the author of The Next Mormons: How Millennials Are Changing the LDS Church (Oxford, March). Listen here for an NPR interview about the NMS study and its generational findings on Mormons’ religious beliefs, behaviors, and political views.