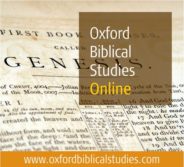 Oxford Biblical Studies Online provides a comprehensive resource for the study of the Bible and biblical history. The integration of authoritative scholarly texts and reference works with tools that provide ease of research into the background, context, and issues related to the Bible make Oxford Biblical Studies Online a valuable resource not only for college students, scholars, and clergy, but also anyone in need of an authoritative, ecumenical, and up-to-date resource.

Note: This post contains spoilers for the series finale of Game of Thrones.

From prophecies and their cryptic interpretations to stories of warring kings and their exploits, the narrative world that George R. R. Martin has created in his fantasy series, A Song of Ice and Fire, shares much in common with the narrative world of the Hebrew Bible. Both worlds are haunted by the impacts of colonialism, the machinations of kings and their advisors, and the competition for influence and resources. At the forefront of the plot, though often working behind the scenes, are several Westerosi wisdom figures. On a literary level, these sages propel the narrative forward, acting as advisors to the monarchs or those who aspire to that position.

In HBO’s television adaptation of Martin’s work, A Game of Thrones, the wisdom tradition expresses itself in three primary ways. Maesters, the official sages of the seven kingdoms, function as the scholars and doctors of Westeros. Like the scribes of the Hebrew Bible, they collect and interpret the history in order to learn from it. The first notable maester we encounter is Maester Luwin, advisor to the Starks. Luwin emphasizes diplomacy by teaching Bran Stark how to navigate the great houses of power in Westeros. While Luwin is a caring figure to Bran and the other Stark children, Qyburn studies more sinister aspects of knowledge and was demoted for dissecting living human beings in pursuit of medical knowledge. Later, Qyburn regains his lost influence by creating the wildfire that the Lannisters use to win the battle of Blackwater Bay and that Cersei uses to massacre her rivals. He also designs the scorpions—long range, portable ballistas that the Lannister armies use against Daenarys Targaryen’s dragons. Much like the pursuit of wisdom in the Hebrew Bible, the maesters seek to record and learn from all sources of wisdom and apply their knowledge to help their rulers.

A second wisdom figure in the realm of Westeros is the intelligence agent. Two characters represent this figure: Lord Baelish (Littlefinger) and Lord Varys (the Spider). Both use knowledge gained from espionage to advance their interests. Lord Baelish gathers much of his information from the women who operate brothels throughout the Kingdom, using secrets to plant seeds in the minds of different characters, while seeking to advance his own status. Lord Varys also has a network of information gatherers, and displays great skill at navigating the shadows of Westerosi society. For Varys, knowledge and its use are the keys to manipulating the direction of the kingdom. Unlike Lord Baelish, however, Varys constantly uses his information in service to the commoners, even when it may mean changing his course of action under threat of death by dragon’s fire. Varys’s intentions reflect those of the benevolent ruler of the book of Proverbs: “Speak out for those who cannot speak, for the rights of all the destitute. Speak out, judge righteously, defend the rights of the poor and needy” (Prov 31:8-9).

The most prominent wisdom figure in Game of Thrones is Tyrion Lannister. Tyrion was born as a dwarf in a society that devalues, in his words, “cripples, bastards, and broken things” (S1, E4). As such, he relies on his cleverness and knowledge to survive the many perils of life as a dwarf among those vying for the Iron Throne. Tyrion devours knowledge in any form. When Jon Snow asks Tyrion why he reads so much, the dwarf replies, “My brother has a sword, and I have my mind. A mind needs books as a sword needs a whetstone” (S1,E2). Tyrion does not only rely on book knowledge; he values observation and life experiences, so much so, that his journey reflects that of Qoheleth. Like Qoheleth, Tyrion revels in strong drink and knowledge, two components at the heart of his self-perception. When Missandei asks him how he came across a particular piece of information, Tyrion responds, “That’s what I do. I drink, and I know things (S6,E2).

On a deeper level, his love of wine and pursuit of women are much more illustrative of his celebration of life in the midst of a dismal world. When discussing the fate of Bran Stark, whom Tyrion’s brother, Jaimie, pushed out of a window, Tyrion challenges Jaimie’s ableist assertions. Jaimie laments, “But even if the boy lives, he’ll be a cripple, grotesque.” In response, Tyrion retorts, “Speaking for the grotesques, I have to disagree. Death is so final, whereas life, ah, life is full of possibilities” (S1,E2). One can hear echoes of Qoheleth in Tyrion’s celebration of life in spite of its limitations:

But whoever is joined with all the living has hope, for a living dog is better than a dead lion. The living know that they will die, but the dead know nothing; they have no more reward, and even the memory of them is lost. (Eccl 9:4-5).

Of course, all the wisdom that Luwin, Qyburn, Littlefinger, Varys, and Tyrion have collected has brought each of them much sorrow (Eccl 1:18). In fact, only one of these sages, Tyrion, still clings to life. Each of the others died either in their petty pursuits or principled stands. And Tyrion, for all his cleverness, must now do penance by toiling under the sun as Hand of the King with the knowledge that he will not even be remembered in the Song of Ice and Fire (Eccl. 1:11).

David G. Garber, Jr. is an Associate Professor of Old Testament and Hebrew at Mercer University’s McAfee School of Theology. In addition to studying the impact of trauma theory on biblical interpretation, Dr. Garber frequently writes and teaches on the intersection of the Bible and Popular Culture. For more on Game of Thrones, you can read his article “Oracles of Ice and Fire: Functions of Prophecy in Game of Thrones”, published on Oxford Biblical Studies Online.