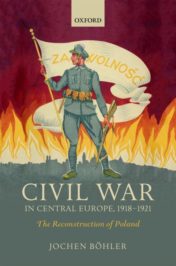 Civil War in Central Europe, 1918-1921: The Reconstruction of Poland

The Great War ended the age of empires in continental Europe. National narratives of the successor states have it that they materialized like the proverbial jack-in-the-box in 1918. In reality, the transition from empire to nation state was a process that lasted years, and thus prolonged the violence of the World War long into the postwar area.

It is only logical, if one thinks about it: in Central Europe, a vast area between Russia and Germany was turned into a tabula rasa on which now new borders had to be drawn. It certainly does not come as a surprise that this was not achieved by peaceful means. In 1919, while peace was established in Paris, fighting went on in Central Europe.

This continuation of conflict was a tragedy for a region that had witnessed some of the fiercest battles of the Eastern Front. Wartime destruction, famine, and epidemics were ubiquitous. After 1918, its population was still suffering, starving, dying. And yet peace was only a distant dream. The immediate postwar experience of the people of Central Europe contrasted highly with the national bravado voiced by the elites in their respective capitals.

A large majority of the new citizens of emerging Central European countries—predominantly peasants—had no clear idea what the new ethnic nation states were supposed to mean. Central Europe was populated by people speaking Lithuanian, Ukrainian, Russian, Yiddish, Czech, Slovak, or German, with no clear boundaries running between them. In prewar censuses, they even had difficulties to grasp the concept of nationality, and in consequence, an alternative category—tutejsi (locals)—had to be added. As subjects of empires until 1918, the idea that they should suddenly be citizens of different states came to them as a shock: “Other times had come,” a peasant noted in his memoir on Polish independence in 1918. “The village woke up because everything was shaking all around. They tell us that there’ll be a Poland and it’s already taking shape, though it’s still a bit weak, but slowly getting stronger. The peasants don’t want to believe it, because we’ve always been told that this here’s Russia and Russia it will be, and now, all of a sudden-hocus-pocus-it’s Poland.”

The immediate postwar experience of the people of Central Europe contrasted highly with the national bravado voiced by the elites in their respective capitals.

From late 1918 onwards, cities, towns, and villages far from the state centers that struggled for survival on a daily basis were drawn into the new contest for national supremacy. Neighbors that had been living together—not conflict-free, but by and large peacefully—under imperial rule for ages overnight were turned into enemies by competing politicians and agents of nationality which claimed them as their citizens. Did they embrace the struggle for national independence with enthusiasm? Were they sending their sons unhesitatingly to the diverse fronts that opened when the arms of the Great War fell silent? Far from it: in the contested borderlands of Central Europe, the passage from war to peace was experienced as a fratricidal civil war. Another peasant in the Lithuanian-Polish borderlands complained: “Now, this is Lithuania, and that’s Poland. It used to be one, but now there’s a border between Bereźniki and Ogrodniki; there’s a war on. Is that how things should be? Don’t we all go to the same church? Isn’t it a disaster that brothers are divided and fighting?”

Geographically in the eye of the cyclone, the emerging ethnic Polish nation state claimed territories that hosted minorities of almost all nations involved in the Central European Civil War. Between 1918 and 1921, it was in a permanent state of declared or undeclared war on literally all frontiers except the Romanian.

For political scientists, the notion of the diverse postwar conflicts in Central Europe as a civil war might be provocative, since the term usually refers to conflicts below state level, while here, different states were involved. The counter-argument is that those very states were not fully developed yet, since their borders and population still had to be defined, and their state institutions—above all a functioning army—had to be built. Furthermore, the local people experienced those conflicts as a civil war, not as wars between nations. With the words of historian David Armitage: “Civil war is, first and foremost, a category of experience; the participants usually know they are in the midst of civil war long before international organizations declare it to be so.” To bring both arguments together: The Central European Civil War marked the transition from empires to nation states. In its fires, state institutions were built and state citizenship was defined.

Featured image credit: “Map showing the political divisions of Europe in 1919 after the treaties of Brest-Litovsk and Versailles” by unknown author. Public Domain via Wikimedia Commons.

Jochen Böhler is temporary chair holder for Eastern European History at Jena University (permanent chair holder: Prof. Joachim von Puttkamer), where he teaches courses on the history of nineteenth- and twentieth-century Central and Eastern Europe. He is the author of Civil War in Central Europe, 1918-1921.

The Treaty of Versailles: A Very Short Introduction