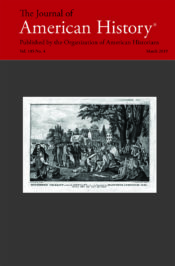 The Journal of American History

The Journal of American History is the leading scholarly publication and journal of record in the field of American history and is the major resource for the study, investigation, and teaching of our country's heritage

Extralegal violence committed by white men in the name of patriotism is a founding tradition of the United States. It is unbearably fitting that the original Patriot landmark, the Liberty Tree in Boston, sported a noose, and inspired earliest use of the metaphor “strange fruit.” The history of the Liberty Tree and a related symbol, the Tree of Slavery, illustrates American entanglements of race and place, nature and nation.

The Liberty Tree was a specific elm (Ulmus americana) in the Province of Massachusetts Bay. It was also a generic designation for political gathering sites throughout the thirteen colonies (mainly in New England, but also notably Charleston and Annapolis). And it was a stylized tree in the form of a “liberty pole,” plus a design element for flags.

In the age of revolution, this emblem had multicultural, transatlantic appeal. The Sons of Liberty in Newport, Rhode Island, appropriated for their cause a sycamore that had previously been used for gatherings by the city’s African population. In Haiti, black revolutionaries enthusiastically adopted liberty poles. Toussaint L’Ouverture’s apocryphal parting words became famous: “In overthrowing me, you have overthrown only the trunk of the tree of negro liberty; but the roots remain; they will push out again, because they are numerous, and go deep into the soil.”

The African tree of liberty was not just metaphorical. From the Caribbean to Brazil to Ecuador-Colombia, maroon communities associated food-producing trees such as tamarind (Tamarindus indica) and pigeon pea (Cajanus cajan) with freedom. A cotton tree (Ceiba pentandra) in the center of Freetown, Sierra Leone, became mnemonically associated with both the slave trade and the homecoming of freed slaves from North America.

In the antebellum United States, abolitionist newspapers regularly printed toasts and lyrics about the glorious tree that bore the fruit of freedom. But for many white male citizens, the arboreal symbol retained its base meaning—regeneration through violence. Henry Ward Beecher, in a collection of pastoral quotations, captured the idea: “A traitor is good fruit to hang from the boughs of the tree of liberty.” Thomas Jefferson, in private, had voiced a similar sentiment in 1787: “The tree of liberty must be refreshed from time to time with the blood of patriots & tyrants.”

For nineteenth-century Americans, the liberty tree had an obvious inverse, the tree of slavery. Abolitionists portrayed it as an invasive non-native species. Drawing on the Bible, they condemned the plant’s evil fruit. Both antiracists and racists used this metaphor. Depending on political context, the fruit could symbolize corruption, miscegenation, the assassination of Abraham Lincoln, unfree labor—or the mere presence of black people on free soil.

Borrowing from Victorian literature, antislavery Americans warned of the upas tree—verdure deadly to the touch. Originally linked to Java in the colonial imagination, the toxic tree (Antiaris toxicaria) became a trope for the dangers and blights of the so-called torrid zone. Early members of the Republican Party spoke of girdling, uprooting, or felling the poisonous tree of slavery. In the darkness following Reconstruction’s end, Frederick Douglass wrote that “one Upas tree overshadows us all.”

As visual art, the tree of unfreedom only occasionally appeared in nineteenth-century media. The most striking example was cartographic. An 1888 chart by John F. Smith titled Historical Geography attempted to explain U.S. history as two divergent plant growths. The godly “Tree of Liberty” had been planted in (continental-climate) Plymouth in 1620 and its blessings spread straightly westward to the Golden Gate under the arboricultural care of Whigs and Republicans. Concurrently, the devilish “Tree of Slavery” took root in (subtropical-climate) Jamestown with the arrival of the first slave ship, and twistingly spread its curses throughout the South. On his politicized map, Smith portrayed the Emancipation Proclamation as a temporal ax.

Did America’s toxic tree ever materialize in woody form? No and yes. There is no Tree of Slavery on the national map—no analogue to the Liberty Tree in Boston‚ an organic monument that, upon death, became a source of relic wood. However, from South Carolina to Texas to Indiana to California, vigilance committees and lynch mobs freely took the lives of out-group members, and then took mementoes from the trees they used as accessories and witnesses to murder.

At root, lynching trees were liberty trees—landmarks of the civic freedom to commit violence in support of white nationalism. They were also vegetal manifestations of toxic masculinity. This dynamic outlived the closing of the frontier and the end of Jim Crow. Timothy McVeigh—a terrorist who considered himself a patriot—owned a T-shirt (now a museum display in Oklahoma City) showing a liberty tree superimposed with Jefferson’s bloody dictum.

In US public memory, lynching is disproportionately associated with the former Confederate states. The privately financed National Memorial for Peace and Justice in Montgomery, Alabama, cries out for complementary sites of truth and reconciliation in every region of the country. If the United States were to fully detoxify its landscapes of memory, Boston, the birthplace of the revolution, could play a role. The Freedom Trail, as designed in the 1950s, excluded the site of the Liberty Tree because the city’s power brokers wanted to steer heritage tourists away from Chinatown and the red-light district Today, one could imagine an extension to a new memorial that encouraged Americans to consider various conjoined growths, past and present, in their republic: freedom and slavery, white liberty and racial terror, boughs and gallows.

Or, returning to Frederick Douglass, if Americans wished to partake of the “tree of knowledge,” they would find its fruits “bitter as well as sweet.”

Jared Farmer is a professor of history at Stony Brook University, New York, USA. He is the author of "Taking Liberties with Historic Trees" in The Journal of American History (March 2019), for which this blog post serves as amplification. He can be reached through his website, Instagram, and Facebook.