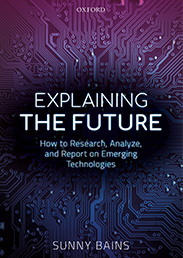 Explaining the Future: How to Research, Analyze, and Report on Emerging Technologies

Elizabeth Holmes was a chemical engineering student who dropped out of Stanford to found Theranos: a silicon-valley start-up company that, at one point, was valued at US$9 billion. Her plan was to be another Steve Jobs and, for a while, it looked like that would happen. She made the cover of magazines like Forbes, Fortune, and even Glamour, wearing black polo-neck shirts and was touted as being the next big thing. Former President Clinton was a fan. Former Secretary-of-State George Schultz was an investor and on the Theranos board as were Henry Kissinger and James (Mad Dog) Mattis who stepped down as Secretary of Defense last year.

Today, she is facing fraud and other criminal charges.

It’s a long, fascinating story. Essentially, her technology was supposed to revolutionise health care: automatically performing hundreds of blood tests on a couple of drops of blood in just a few minutes. In reality, it was no more carefully thought out than an undergraduate research project. She lied to her staff, lied to her investors, lied to her board, and lied to her company’s potential customers. Her company claimed it was using new technology to perform blood tests when, in fact, it was using the same equipment as every other lab (except Theranos got poorer results because they did not have enough blood to do the tests properly).

All this is detailed in the book Bad Blood by John Carreyrou, the Wall Street Journal investigative reporter who broke the story with the help of whistle-blowers.

What fascinates me about this saga is how the scam was able to go on for so long: more than 10 years. In that time there was an incredible rate of staff turnover (including one suicide), endless lawsuits, countless missed deadlines, and a seeming inability to finish any serious studies that demonstrated the technology worked. At one stage, Holmes was even asked to step down by members of her board but managed to talk them out of it.

The cult of personality that grew up around Elizabeth Holmes accounts for both her success and failure. By all accounts she is an incredibly magnetic person and – at least to begin with – most people found her an inspiring leader and visionary. This is what made it possible to raise millions of dollars, get such prominent people on her board, and attract a lot of incredibly talented people to work with and for her.

Steve Jobs, of course, was famous for a similar kind of charisma and bullying (also an issue at Theranos), so perhaps it’s not surprising that the ‘reality-distortion field’ associated with him was present here too. But, of course, Steve Jobs wasn’t alone. He had Steve Wozniak, the technical brains that made Apple possible. Jobs could play the visionary, safe in the knowledge that Woz (and others that followed) would look after the details.

Elizabeth didn’t have that: in fact, the cult of personality built up around her made it impossible for her Woz to emerge.

Experts don’t like being undervalued, so the naysayers start to leave and the yes-men take their places.

Where there is a Great Leader figure – in business, politics, tech, academia – who doesn’t have the personality or maturity to use their power wisely, there is often a predictable downward spiral. First, our hero starts to believe that their initial success comes from extraordinary talent, and that despite their lack of education or training or experience (or all of the above) they are the only ones capable of realising their vision. This strips away any humility they might have had. Even if they have a lot of great people around them, their belief in their own exceptionalism leads them to start overruling those who disagree based on instinct rather than expertise.

Experts don’t like being undervalued, so the naysayers start to leave and the yes-men take their places. They tell the boss what the boss wants to hear, true or not. This makes those left who are willing to speak out seem even more whiney in contrast, making the ‘great leader’ paranoid. Now, loyalty is the ultimate virtue: not to the original idea or mission of the company, but to the leader. Being a team player starts being equated with doing what you’re told. Because performance now comes second to obedience, mediocrity thrives. There is no voice for excellence. Ironically, of course, the people with the most integrity and genuine passion for the project are the most likely to leave, leaving the opportunists behind.

This paranoia also cultivates a culture of secrecy and centralisation, where the left hand is prevented from knowing what the right is doing for fear that they may conspire. People are discouraged from asking questions and start to hear the answer, “Because I said so.” This lack of transparency leads to poor communication, misunderstanding of problems, and inefficiency. Since staff have no agency, many feel absolved of personal responsibility. When asked to behave unethically, they feel they have no choice. This is a road not just to failure, but disaster.

We need to stop looking for the next great leader and focus on looking for great ideas. We will figure out which will succeed and which will fail not through being charmed, or going with our gut, or believing in the latest genius, but by asking intelligent and probing questions and teaming up with people who are working hard to find answers. Yes, it’s easier to sit back passively and ride on some great leader’s coat tails. If you do, however, don’t count on reaching the destination you had in mind.

Dr Sunny Bains is a scientist and journalist in the Faculty of Engineering, University College London where she teaches research, analysis, and communication skills to science, engineering and technical journalism students. She received the UCL Provosts Teaching Award in 2016. Bains is also Editorial Director of Engineering Inspiration, a customizeable news site that brings together the best news articles from across science and technology. She has written hundreds of articles for magazines including The Economist, Science, New Scientist, Wired, Electronic Engineering Times, and Laser Focus World, covering topics related to optics and photonics, machine intelligence and AI, emerging computing technoloies, imaging, and displays.

There are no aliens… at least officially