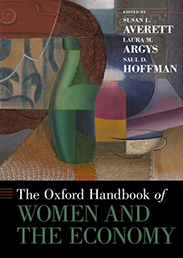 The 2018 U.S. elections changed many things, including, most notably, the gender composition of elected representatives in Washington and throughout the country. Both the Senate and House of Representatives are now nearly 25% female, a record high and more than double the percentage of 20 years ago. Nine women are currently serving as governors (tying the record), including five newly-elected this year, and countless more women were elected to state legislatures and other local offices.

This change in gender composition is potentially a big deal, especially considering what many would call the “female-hostile” approach of the Trump administration and conservative Republicans. Even though the women elected to office are not necessarily your typical women, it is interesting to examine what research in economics suggests about what may happen in the future.

So, what policy changes do we expect to see?

First of all, female politicians are likely to focus on new policies. Evidence suggests that greater representation of women results in a stronger focus on children’s needs, women’s health, and family policy. More women in leadership positions could also mean increased efforts to make the workplace more family friendly and help reduce the U.S. gender wage gap, which is still 20% and shrinking very slowly. Research by economists suggests that the responsibilities for family that women shoulder disproportionately compared to men and the value that women place on flexible jobs are an important part of the explanation for that persistent gap. With children under age one now allowed on the floor of the House of Representatives, we are sure to see a broader and better integration of family and work that will help both men and women thrive.

Lived experience matters, too. One well-known economics study showed that having a daughter increased a U.S. congressperson’s likelihood of voting more liberally, especially on reproductive rights.

Does gender also matter in a broader and perhaps deeper sense? Do women make decisions differently in ways that might affect how government acts in the future? A substantial research literature in economics shows that women and men do have different preferences regarding the work environment and how they make decisions. This research from the field of experimental economics documents systematic ways in which men and woman differ in terms of competitiveness, their risk-taking, and their interest in collaborative decision-making. These differences have been observed so consistently over and over and across countries and cultures that we can now regard them as well-established pieces of our understanding of gender differences.

Female politicians are likely to focus on new policies. Evidence suggests that greater representation of women results in a stronger focus on children’s needs, women’s health, and family policy.

We know, for example, that men are often overconfident about their skills and are more likely to be risk takers. In experiments in which subjects perform simple computational tasks and are rewarded based on performance, male subjects consistently opt more frequently for “winner-take-all” compensation systems in which the best performer gets all or most of the purse—like a golf or tennis tournament—even though they perform no better than the women and are unlikely to benefit from that kind of reward system. Some evidence indicates that women experience more stress in situations that involve the risk of a negative outcome; this may explain their greater risk aversion.

Overconfident and risk-loving? Does that sound like an ideal elected official?

It’s also reasonable to expect increased cooperation among female policymakers. There is overwhelming evidence that men are more attracted to competitive environments, while women prefer a more cooperative team environment in which compensation is based on group, rather than individual, performance. In the political arena, increased collaboration and risk aversion may have tangible outcomes. Recent evidence suggests that the average female legislator enacts 50% more bills than the average male legislator.

There will also likely be a change in leadership style. Research suggests that policies that increase the representation of women leaders in the business world make a difference. Norway is the most famous example, where a 2005 law mandated that at least 40 percent of directors of public companies must be female. Similar policies have been adopted in Germany, France, Belgium, Iceland, and Italy.  A recent research study compared the behavior of the Norwegian firms with similar firms in other Nordic countries. The verdict? It appears that women are more altruistic (if somewhat less profit-oriented); the likelihood of large layoffs was 20 percent lower in the Norwegian firms with greater female representation.

And, finally, these women will undoubtedly serve as role models for future women. There is evidence that the proportion of women candidates increases significantly in areas represented by women in elected positions (even if, as in some countries, women were initially elected to meet required gender quotas). The current increase in female representation bodes well for changing policy and improving gender balance in the near future.

Susan L. Averett is the Charles A. Dana Professor of Economics at Lafayette College.

Laura M. Argys is Professor of Economics and Associate Dean for Research and Creative Activities at the University of Colorado, Denver.

Women in economics: female achievement in a male-dominated field

9 facts about women and the economy