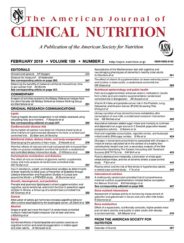 The American Journal of Clinical Nutrition

The American Journal of Clinical Nutrition (AJCN) publishes the latest research on topics in nutrition, such as obesity, vitamins and minerals, nutrition and disease, and energy metabolism.

As St. Patrick’s Day approaches, many dread the incapacitated hangover of the day after – when the nausea hits you and you cannot do anything but lay in bed and every movement worsens your pounding headache. Wouldn’t it be helpful to have ways to lessen the burden of alcohol-induced hangover?

A hangover is a complex of symptoms following an evening of heavy drinking that includes thirstiness, fatigue, headache, nausea, and dizziness. Even though we are more than familiar with its symptoms, scientists still don’t fully understand all the mechanisms that lead to alcohol-induced hangover and medical remedies are yet to be found.

Some would advise not to drink at all, but on a day like St. Patrick’s Day, for many, that’s not a valid option. Others endorsing tactical drinking often relay on old-aged wisdom such as “Beer before liquor, you’ve never been sicker – Liquor before beer, you’re in the clear!” or “Beer before wine, and you’ll feel fine – Wine before beer and you’ll feel queer!” The Irish would probably suggest just sticking with their tasty dry stout. But is there any evidence for the idea that the order in which you drink alcoholic beverages can affect how you feel the next day?

In a recent study, German researchers undertook a randomized clinical trial to test the effect of the order of beer and wine consumption on the next day’s hangover severity. The researchers enrolled 90 volunteers and matched them for gender, age, height, weight, drinking habits, and hangover frequency, before randomizing them into three groups – two study groups and one control group.

Participants in study group 1 enjoyed Carlsberg premium Pilsner up to a breath alcohol concentration of 0.05% (the legal driving limit in Germany) and were then switched to white wine until they reached a happy 0.11%. Study group 2’s regimen was the other way around. On average, each volunteer consumed three large beers plus almost a bottle of wine in each study group. A third group, the controls, drank either just beer or just wine.

Researchers assessed hangover severity the next morning when breath alcohol concentrations had returned to zero. After a clear out phase of one week, volunteers returned for a second evening and switched their alcohol consumption regimen.

Interestingly, the team did not find any truth in the old folklore indicating that drinking beer before wine would lead to a milder hangover, undermining all efforts of tactical drinking. Women reported slightly worse hangovers compared to men, but neither age, sex, body weight, nor even drinking experience were good predictors for how severe the hangover was the next morning.

On a side note, for the whiskey lovers – be warned. An earlier study compared bourbon vs. vodka, showing that less distilled whiskey significantly worsens hangover severity the next day. Since the study did not cover Irish single malt whiskey, that might be worth a try – in the spirit of this holiday.

For now, the authors conclude that only that perceived drunkenness and the personal gut feeling—in its truest meaning—are good predictors of the hangover the following day. And they remind us that a hangover is an important body reaction, telling us that excessive drinking is unhealthy.

Jöran Köchling is a medical student at Witten/Herdecke University in Germany. Alongside his medical studies, he pursued a medical doctorate degree focusing on clinical trials in the field of public health and nutrition. He currently works at the MetroHealth Medical Center in Cleveland, Ohio for his practical year.

Dr Kai Hensel is a clinician scientist, paediatrician, and emergency physician. After his medical studies at Witten/Herdecke University, he finished a medical doctorate degree (MD) in clinical research on diagnostic imaging for the early detection of cardiovascular disease. For his PHD thesis in the field of paediatric hepatology, he studied epigenetics in hepatitis b virus infections. He’s published widely in a variety of research projects on child health – from translational research to health services science. He currently works as a senior clinical fellow in the department of paediatric gastroenterology, hepatology and nutrition at Addenbrooke’s Hospital, Cambridge University Hospitals NHS Foundation Trust.

The fungus that’s worth $900 billion a year