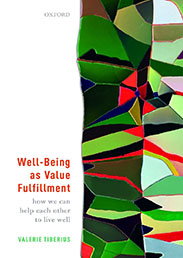 Well-Being as Value Fulfillment: How We Can Help Each Other to Live Well

No one has ever crossed the Antarctic by themselves and without help from other people or engines. To me, this is very unsurprising and uninteresting. No one (outside of superhero movies) has ever shrunk themselves to the size of an ant, or turned back time by causing the earth to rotate backwards either. Big deal. But to Colin O’Brady (a 33-year-old American adventure athlete) and Louis Rudd (a 49-year-old British Army Captain) the fact that no one has ever crossed the Antarctic unsupported is very interesting. Indeed, this fact motivates them both to try to do it! When I first became aware of their stories, both men were in the midst of attempting this 921-mile journey, pulling their sleds of supplies on cross-country skiis across an icy, unforgiving terrain. Now, happily, both men have succeeded! O’Brady completed the trip in 54 days, Rudd in 56. That’s almost two months of working out hard in a freezer under the constant threat of death. Even in light of their survival and record-setting, nothing about this sounds remotely appealing to me.

O’Brady and Rudd both have wives; Rudd has children. They probably also have friends. If they were my friends, I would have tried to talk them out of attempting what seems to me a crazy thing to do. If Rudd were my friend, I would even want to prevent him from going. I would consider lying to him if that would change his course: “Louis, you can’t go to the Antarctic this year because you’ll miss my wedding/Broadway debut/bat mitzvah!” But would that be good for him? I wouldn’t want my friend to risk his life in this way, but what about what he wants?

One thing seems clear from the stories you read about people like O’Brady and Rudd – people who climb Everest without oxygen, or free climb El Capitan without ropes or safety gear –:  it’s really important to them to do these things. So important that many of them keep climbing, trekking, and risking their lives even after someone they know dies in the attempt. (In fact, Rudd’s friends Henry Worsley did die making attempting the Antarctic trip 2 years ago). These men value risk, adventure, and challenge in the way that I value safety and spending time with my friends and family.

There are two ways to respond to the difference between risk-averse me and risk-loving Rudd. One thought you might have is that one of us is wrong about what matters in life. On this view, well-being consists in achieving things that are objectively valuable and people who value the wrong things do things that are detrimental to their well-being.  I can convince myself that this is an appealing view when I think that I’m right, and I don’t try very hard to put myself in Rudd’s shoes. But when I do put myself in Rudd’s shoes, and I realize that the things he values are as important to him as the things I value are to me, I feel a little queasy about this answer. After all, it’s not that I don’t think any values are worth risking your life for: I like to think that I would put my own life at risk for some of the things I value deeply (though I haven’t really been tested). The difference is that I wouldn’t risk my life for pulling heavy objects in an icebox.

The other way to respond to the difference between Rudd and me is to think that this difference makes a profound difference to what is good for each of us. On this view, a person’s life goes well to the extent that they fulfill their own values, and different people can achieve well-being by pursuing very different things. Learning about people who are very different from me has led me to think that this must be the right way to go. For O’Brady and Rudd, their love of high-risk achievements is not a whim or a passing fancy, nor is it (as far as we can tell) the expression of an unhealthy death wish. For them, these are long-standing passions around which they organize their lives; these activities are the ground projects (as Bernard Williams put it) that give their lives meaning. They just don’t happen to be ground projects that many of the rest of us can understand.

There aren’t many people who want to cross the Antarctic on cross country skiis. But other kinds of differences in values – and how we understand what it is to achieve those values – are common: some people want to have children, others don’t; some people think career success is extremely important, others see their jobs as just jobs and put more energy into their avocations; some people think appreciation of fine aesthetic objects is crucial to a good life, others couldn’t care less about fine wine or art. Once we see the importance of what people value to their well-being, and we appreciate that people can differ significantly in what they value, we’ll also see that it’s probably a good idea to have a little humility about what we think we know about what is good.

Valerie Tiberius is the Professor of Philosophy and Department Chair, University of Minnesota.