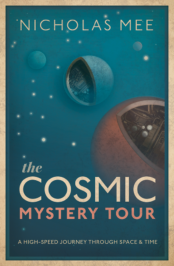 By the mid-1930s, just five fundamental particles were known. This concise collection of building blocks revealed the true nature of matter and light. Three types of particle: electrons, protons, and neutrons, formed the wide array of atoms known to chemistry. Photons composed the whole electromagnetic spectrum, including light. The fifth particle was the positron, the anti-particle of the electron, predicted by Paul Dirac and discovered by Carl Anderson in cosmic rays. The interactions between these particles were explained in terms of just three forces: electromagnetism, the strong force, which binds the atomic nucleus together, and the weak force, which is responsible for some forms of radioactivity.

The world of particle physics seemed neat and tidy with everything in its place. Then, in 1936, Carl Anderson and Seth Neddermeyer announced the discovery of another new particle in cosmic rays, a particle now known as the muon. The whole physics community was taken aback at the unexpected arrival of a particle with no obvious role in the grand scheme of things. Nuclear physicist Isador Rabi captured their surprise in his memorable reaction: “Who ordered that?”

Muons behave just like very heavy electrons, with around 207 times as much mass. Like electrons, they feel the electromagnetic and weak forces. Unlike the electron, the muon is unstable, decaying into an electron and two neutrinos with a lifetime of around two microseconds.

Muons undergo numerous interactions when passing through matter, but lose very little energy in each collision. Being so much more massive than electrons, they just brush the electrons to one side as they pass by. Muons are also deflected much less than electrons by the electromagnetic fields within a solid material, so they generate much smaller electromagnetic ripples and lose much less energy in this way as well.

These characteristics mean that muons are the most penetrating of all the particles produced in the LHC apart from the will-o-the-wisp neutrinos that head off into deep space and disappear without a trace.

These ultra high energy particles are created in our atmosphere when high energy protons and other cosmic rays from distant regions of the galaxy collide with atomic nuclei in the atmosphere. Every second dozens of them pass through our bodies and an estimated 150 pass through every square metre of the Earth’s surface, penetrating . up to a kilometre of solid ground. They travel further through less dense materials such as air and this has given rise to an important practical application.

Japanese physicists have adapted sensitive muon detectors designed for particle physics experiments to monitor the innards of active volcanoes in a technique known as muon transmission imaging or muography. Detectors are positioned around the volcano and the flux of muons from different directions is measured. There is a greater transmission of muons through low density material such as a cavity within the volcano, so a 3D image of the volcano’s interior is generated, just as an X-ray machine can peer inside a human body. By imaging the volcano over a period of time it is possible to see the magma chamber filling with molten lava which offers the potential to save lives by evacuating the area prior to an eruption.

In the same way, muons are now being used to investigate the mysteries of the ancient world. The Pharaoh Khufu ruled Egypt over 4500 years ago and is remembered for building the Great Pyramid on the plateau of Giza close to present day Cairo. Within the pyramid are three chambers: the King’s Chamber, the Queen’s Chamber and an unfinished chamber cut into the bedrock. The pyramid was looted in antiquity and the base of a sarcophagus in the King’s Chamber is all that remains inside. But the Great Pyramid is vast and there has long been speculation that other hidden chambers may exist deep within its structure.

The muographers have taken up the challenge of revealing secret rooms hidden within the Great Pyramid. In 2017 a team of physicists led by Kunihiro Morishima of Nagoya University, Japan announced the discovery of a large cavity about 30 metres long above the Grand Gallery within the pyramid. They made this remarkable discovery by placing muon detectors in the Queen’s chamber and using the imaging methods developed for monitoring volcanoes. To confirm the reality of the discovery three different techniques for detecting muons were used, so the physicists are confident their results are correct.

Perhaps, this is the secret chamber where the royal treasures of pharaoh Khufu were hidden 4500 years ago and they have rested there undisturbed ever since. As yet, no-one knows. The team is currently designing a mini flying robot with the aim of investigating further.

An amended version of this article was originally published here on 28th April 2018.