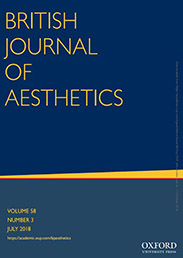 The British Journal of Aesthetics

Founded in 1960, the British Journal of Aesthetics is highly regarded as an international forum for debate in philosophical aesthetics and the philosophy of art. The Journal is published to promote the study and discussion of philosophical questions about aesthetic experience and the arts.

Immoral fantasies are not uncommon, nor are they necessarily unhealthy. Some are silly and unrealistic, though others can be genuinely disturbing. You might fantasize about kicking your boss in the shins, or having an affair with your best friend’s spouse, or planning the perfect murder. Everyone enjoys a dark little fantasy at some time. Which leads us to wonder, is it ever morally wrong to do so? Or, a better way to put the question, under what conditions is it morally wrong to fantasize about something?

A natural response to these questions is to answer flatly: no. It can never be morally wrong to fantasize about something simply because it is a fantasy. My imagination is not a space where morality intrudes. Rather, what happens in my imagination is my business, and no one else’s moral qualms should have bearing on this most personal space.

Despite this, there are circumstances where there is good reason to be morally concerned with some imaginings even if we still insist that people should be free to do so. The notion of an ethics of imagination falls into the interesting logical space where morality and legality come apart, that realm of morality that lies beyond what can be legislated. It is this same logical space where we find things like the ethical condemnation of a cheating lover (at least, between unmarried lovers). Cheaters cannot be arrested, but they are still jerks. It is not illegal to cheat on a lover, but it is immoral. The same is true for fantasies. We are free to imagine whatever we wish, but some fantasies are morally problematic.

Our fantasies feed certain desires for us, typically desires that otherwise go unfulfilled.

The slightly longer answer is this. Our fantasies are often tied to our desires—not always, but often. It is not an accident that we fantasize about the things that we do. If you fantasize about kicking your boss in the shins, it is likely due to some conflict that exists between you and your boss. If you fantasize about having an affair with your best friend’s spouse, it is likely because you fancy your best friend’s spouse. Our fantasies feed certain desires for us, typically desires that otherwise go unfulfilled.

This is particularly true for recurrent fantasies. Some fantasies pop into our heads seemingly unexpectedly. Some pass through our consciousness for a fleeting moment never to return again. Perhaps after an unpleasant conversation with your boss, you momentarily imagine kicking him in the shins. But the feeling passes and you don’t really dwell on the fantasy. Fleeting imaginings like these are not morally worrisome.

So, if we turn to fantasy to satisfy desires that we cannot otherwise satisfy, and some desires are themselves immoral, then we are doing an injustice to ourselves when we satisfy an immoral desire in our fantasies. By satisfying the desire, we do not rid ourselves of it. Rather, we run the risk of reinforcing the desire—that is, we may cultivate in ourselves a desire for something that we ought not to desire.

The interesting upshot of this philosophically is that fantasy is not immune from morality, despite its separation from reality. The boundaries of morality extend further than we might think—indeed, into thought itself.

Anna Cremaldi is an Associate Professor of Philosophy at Appalachian State University. Her research focuses on classical ethics and the role of the virtues in the well-lived life. Her essays have appeared in the British Journal of Aesthetics, the Polish Journal of Philosophy, Ratio, the Southwest Philosophy Review.

Their article, ""It’s Just a Story": Pornography, Desire, and the Ethics of Fictive Imagining" was included in the Oxford Think Festival collection.