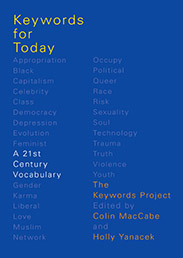 Terror comes into English in the late fourteenth century, partly from Middle French terreur, and partly directly from Latin terror. The word means both “the state of being greatly frightened” and “the cause of that state,” an ambiguity that is central to its future political meanings. In Early Modern English, terror comes to stand for a state of fear provoked on the very edge of the social. That state is associated with the god Pan and the fear that grips men when they feel themselves removed from any social contact. It also stands for death itself.

The political meanings of terror date from the period March 1793 to July 1794, when the use of organized intimidation became an instrument of policy for the Jacobins and Robespierre. Interestingly, the announcement of terror as public policy was as much an attempt to claim the breakdown of social order as a government policy as it was a deliberate attempt to cause that breakdown. Throughout the first half of the nineteenth century, “a state of affairs in which the general community live in dread of death or outrage” was the dominant political meaning, and was still the most important meaning for the first edition of Oxford English Dictionary. It is worth remembering that most political terror during the twentieth century, from the German genocide in the Herero War of 1904-05 to the gulags of Stalin’s Soviet Union and the terror bombing by the Allied air forces during World War II, has been state terror (to be distinguished from state-sponsored terrorism, discussed below).

The invention of dynamite in 1863 by Alfred Nobel was the crucial technological condition which gave us modern terrorism. Although both terrorism and terrorist were joined in relation to the Jacobins, widespread use of these modern nouns comes when small groups of political dissidents attempt to use violent explosive force against an existing state to bring about political change. Three more or less distinct stages in this process can be sketched. The first, up until 1914, sees particularly in Russia the growth of a kind of terrorism which describes itself as such, and which believes that the social order is so rotten that a single act of violence aimed at the center of power will bring about a revolutionary transformation. Some sense of this is captured in the phrase little terror, which begins to be used at this time to describe difficult young children. This first wave of terrorism found unprecedented historical success when the assassination of the Archduke Franz Ferdinand in Sarajevo in 1914 occasioned what Keynes called the “European Civil War.”

This conception of terrorism, the model for a host of imitators, is captured in the slogan “one man’s terrorist is another man’s freedom fighter.”

In the aftermath of that war, the Irish, who had participated in this first chapter of terrorism, developed a terrorist campaign targeting the police, a campaign that described itself as part of a military struggle for national liberation. This conception of terrorism, the model for a host of imitators, is captured in the slogan “one man’s terrorist is another man’s freedom fighter.” The focus of definition for terror passes from the act of terrorism itself to the status of the terrorist and whether he or she is authorized by an alternative and unrecognized legal authority. Thus, Michael Collins and the Irish Republican Army claimed their actions as legitimized by the Irish Republic that Pearse had proclaimed on the steps of the Post Office on Easter Monday 1916. Similarly, Umkhonto we Sizwe (or MK), translated as “Spear of the Nation,” authorized its violence in relation to the African National Congress, an authorization accepted by George W. Bush when he signed a bill removing the ANC from the US terror blacklist. In this period, use of terrorism and terrorist becomes widespread – note for example the decision made by British colonial authorities’ in the Malayan emergency of the 1950s to always refer to “Communist terrorists” and never just “Communists.”

This second stage culminated in the terror campaigns of the National Liberation Front or FLN (one of which is famously represented in Gillo Pontecorvo’s Battle of Algiers) that led to Algerian independence in 1962. The Algerian experience became the constant reference point for a new wave of terrorism in the aftermath of the Six-Day War of 1967, when a variety of Palestinian groups adopted terrorist tactics now taken onto an international stage. This was also the start of state-sponsored terrorism, as different Arab states supported different Palestinian groupings.

A full history of terrorism would need to reflect continuously on both the development of weapons and communication technology. The new phase, for instance, was marked by plastic explosives (the expression car bomb is added to the language in this period) and the ability (most famously at Munich in 1972) to get the world’s instant attention through television screens. In the 1980s, with the failure of Arab nationalism to deliver either socialist or capitalist success for its peoples, a new form of Islamic terrorism began to develop. This new variety of terrorism claimed its authority not from a political but from divine authority. This appearance of the divine was one of the conditions of the emergence of the suicide bomber (another was further sophistication of the technology of plastic explosives). These developments culminated in the attacks of September 11, 2001.

In the aftermath of the September 11th attacks, George W. Bush announced his “War on Terror,” thus, as Terry Jones remarked, becoming the first world leader to declare war on an abstract noun. The political effects of this use of terror have prompted widespread questioning of the term and of the nature of terrorism itself. Distinguishing between terrorist and non-terrorist acts of violence in terms of the acts themselves is problematic, and if we follow the Hobbesian arguments of the German legal philosopher Carl Schmidt that at the root of every state’s legitimate use of violence is an illegitimate use of violence, it is difficult to produce a distinction in terms of legal authority. The linguistic effects of Bush’s war are difficult to gauge, but it could be argued that Bush completed a process begun by Robespierre and that a word initially used to describe emotional states experienced at the very margins of the social is now limited entirely to describing emotional states experienced at the very heart of social and political life.

The Keywords Project is an independent group of scholars who, with the support of the University of Pittsburgh, Jesus College, Cambridge, and the academic journal Critical Quarterly, have spent more than a decade preparing Keywords for Today.

Colin MacCabe is Distinguished Professor of English and Film at the University of Pittsburgh. He taught the history of modern and Early Modern English at Cambridge and Strathclyde universities before becoming Head of Production at the British Film Institute in 1985. Since then he has combined literary criticism and film production.

The politics of “political” – how the word has changed its meaning