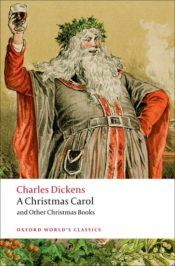 A Christmas Carol has gripped the public imagination since it was first published in 1843, and it is now as much a part of Christmas as mistletoe or plum pudding. The Oxford World's Classics edition, edited by Robert Douglas-Fairhurst, reprints the story alongside Dickens's four other Christmas Books: The Chimes, The Cricket on the Hearth, The Battle of Life, and The Haunted Man.

Following a recipe for roast goose by Mrs Beeton, here’s that classic Christmas dinner portrayed by Charles Dickens in the famous scene from A Christmas Carol. Here Ebeneezer Scrooge watches with the Ghost of Christmas Present as the Cratchit family sits down to roast goose and Christmas pudding.

“And how did little Tim behave?” asked Mrs Cratchit, when she had rallied Bob on his credulity, and Bob had hugged his daughter to his heart’s content.

“As good as gold,” said Bob, “and better. Somehow he gets thoughtful, sitting by himself so much, and thinks the strangest things you ever heard. He told me, coming home, that he hoped the people saw him in the church, because he was a cripple, and it might be pleasant to them to remember upon Christmas Day, who made lame beggars walk, and blind men see.”

Bob’s voice was tremulous when he told them this, and trembled more when he said that Tiny Tim was growing strong and hearty.

His active little crutch was heard upon the floor, and back came Tiny Tim before another word was spoken, escorted by his brother and sister to his stool before the fire; and while Bob, turning up his cuffs — as if, poor fellow, they were capable of being made more shabby — compounded some hot mixture in a jug with gin and lemons, and stirred it round and round and put it on the hob to simmer; Master Peter, and the two ubiquitous young Cratchits went to fetch the goose, with which they soon returned in high procession.

Such a bustle ensued that you might have thought a goose the rarest of all birds; a feathered phenomenon, to which a black swan was a matter of course — and in truth it was something very like it in that house. Mrs Cratchit made the gravy (ready beforehand in a little saucepan) hissing hot; Master Peter mashed the potatoes with incredible vigour; Miss Belinda sweetened up the apple-sauce; Martha dusted the hot plates; Bob took Tiny Tim beside him in a tiny corner at the table; the two young Cratchits set chairs for everybody, not forgetting themselves, and mounting guard upon their posts, crammed spoons into their mouths, lest they should shriek for goose before their turn came to be helped. At last the dishes were set on, and grace was said. It was succeeded by a breathless pause, as Mrs Cratchit, looking slowly all along the carving knife, prepared to plunge it in the breast; but when she did, and when the long expected gush of stuffing issued forth, one murmur of delight arose all round the board and even Tiny Tim, excited by the two young Cratchits, beat on the table with the handle of his knife, and feebly cried Hurrah!

There never was such a goose. Bob said he didn’t believe there ever was such a goose cooked. Its tenderness and flavour, size and cheapness, were the themes of universal admiration. Eked out by apple-sauce and mashed potatoes, it was a sufficient dinner for the whole family; indeed, as Mrs Cratchit said with great delight (surveying one small atom of bone upon the dish), they hadn’t ate it all particular, were steeped in sage and onion to the eyebrows! But now, the plates being changed by Miss Belinda, Mrs Cratchit left the room alone — too nervous to bear witness — to take the pudding up and bring it in.

Suppose it should not be done enough! Suppose it should break in turning out! Suppose somebody should have got over the wall of the back-yard, and stolen it, while they were merry with the goose — and supposition at which the two young Cratchits became livid! All sorts of horrors were supposed.

Hallo! A great deal of steam! The pudding was out of the copper. A smell like a washing-day! That was the cloth. A smell like an eating-house and a pastrycook’s next door to each other, with a laundress’s next door to that! That was the pudding! In half a minute Mrs Cratchit entered — flushed by smiling proudly — with the pudding, like a speckled cannon-ball, so hard and firm, blazing in half of half-a-quartern of ignited brandy, and bedight with Christmas holly stuck into the top.

Oh, a wonderful pudding! Bob Cratchit said, and calmly too, that he regarded it as the greatest success achieved by Mrs Cratchit since their marriage. Mrs Cratchit said that now the weight was off her mind, she would confess she had her doubts about the quantity of flour. Everybody had something to say about it, but nobody said or thought it was at all a small pudding for a large family. It would have been flat heresy to do so. Any Cratchit would have blushed to hint at such a thing.

At last the dinner was all done, the cloth was cleared, the hearth swept, and the fire made up. The compound in the jug being tasted, and considered perfect, apples and oranges were put upon the table, and a shovel-full of chestnuts on the fire. Then all the Cratchit family drew round the hearth, in what Bob Cratchit called a circle, meaning half a one; and at Bob Cratchit’s elbow stood the family display of glass. Two tumblers, and a custard-cup without a handle.

These held the hot stuff from the jug, however, as well as golden goblets would have done; and Bob served it out with beaming looks, while the chestnuts on the fire sputtered and cracked noisily. Then Bob proposed:

“A Merry Christmas to us all, my dears. God bless us!” Which all the family re-echoed.

“God bless us every one!” said Tiny Tim, the last of all.