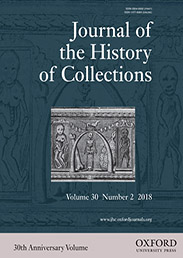 Journal of the History of Collections

The Journal of the History of Collections is dedicated to providing the clearest insight into all aspects of collecting activity. For centuries collecting has been the pursuit of princes and apothecaries, scholars and amateurs alike. Only recently, however, has the study of collections and their collectors become the subject of great multidisciplinary interest. The range of the Journal of the History of Collections embraces the contents of collections, the processes which initiated their formation, and the circumstances of the collectors themselves.

It has been five years since I started my research on anatomy in 19th century Belgium, but I remember my first visit to an anatomical collection like it was yesterday. It was the beginning of autumn and the temperature was cool enough to cause a slight numbness in my hands. I was not yet used to the piercing smell of alcohol and formaldehyde; a smell that soaked into my clothes and skin, and that I immediately associated with death. Most of all I remember the fetuses. Dozens of jars of human fetuses packed four or five deep on plain metal shelves. As I rearranged them carefully to be able to look at them, they rocked on the rippling preservation fluid. Of course, there were other items on the shelves —a jar with ovaries, a preserved heart, all kinds of bones— but they were less numerous, and their containers and preservation fluid suggested that they stemmed from the 20th rather than the 19th century.

Naive as I was —a newly-come PhD student in the beginning of her twenties— I figured that 19th-century anatomists must have been particularly interested in fetuses. I even found some evidence to support this claim: Cambridge archeologists had argued that fetal and infant remains were much more likely to be curated long term in anatomical collections; meeting reports of 19th century scientific societies showed that anatomists encouraged their former students to send “interesting” miscarried or stillborn fetuses to them; and snippets from hospital archives revealed that many women who died in hospital were autopsied in the hopes of finding fetal remains.

But then I found the original 19th-century inventories of the anatomical collections I visited. There were indeed long enumerations of fetal preparations. Yet to my surprise there were also mountains of pages on other body parts and types of bodies, such as preparations of the sensory organs and the respiratory system, and a large collection of skeletal remains from different “races”. It became clear that anatomists in 19th century Belgium had not been particularly interested in fetuses. The development of the fetus was but one of their many interests. It just happened to be that the jars containing fetuses remained in collections until today, whereas the other preparations had disappeared. To give one concrete example: it is estimated that the anatomist Adolphe Burggraeve (1806-1902) and his aide Edouard Meulewaeter made over 200 preparations per year. Only three remain today. The most well-known is a newborn child dressed in a white christening gown, lauded for its rosy cheeks and natural skin tone.

If these fetuses do not tell us much about 19th-century scientific interests, then what can we, as historians, learn from them? Most obviously, it has taught me to distinguish between historical collections and what is left of them today. Remaining specimens are not representative of the collections to which they once belonged. Historians of anatomy have to broaden their view, and scrutinize what archeologists have called the “missing majority”. In fact, studying missing anatomical specimens, and the ways in which they have been disposed of, cannot only reveal much about changing research agendas, but also about changing standards and sensitivities with regard to the preservation and use of human remains in collections.

Most importantly, the preservation of these fetuses tells us something about historically rooted assumptions about the social value of certain human remains.

Most importantly, the preservation of these fetuses tells us something about historically rooted assumptions about the social value of certain human remains. Scholars such as Susan Lawrence or Lynn Morgan have drawn attention to the varying social value of different parts or types of bodies. Whereas we believe that human remains clearly embodying a sense of identity or personhood should be either kept or disposed of in meaningful ways, we are largely indifferent towards the treatment of other bodily materials, such as tissue samples, hair, or vials of blood. In a similar vein, differences between historical anatomical collections and what is left from them today might teach us much about relations between body and personhood, and about what it means to be (dis)qualified as human.

In the Brussels City Archives, I found requests to bury “jars with organs”. At least until the 1940s, discarded anatomical preparations were brought to the cemetery, where they were buried anonymously, together in a grave. It explains why I was unable to trace most of the preparations that filled the pages of 19th-century inventories. However, I also discovered that anatomists had to ask the city council for special permission to preserve fetuses after six months of gestation. The law described that they had to be buried individually in a separate coffin or alongside their mother if she had died during childbirth. Whereas “jars with organs” could be buried anonymously, fetuses had to be “decently” disposed of because they had a different social value. Perhaps fetuses remain in collections because we were —and are— unable to throw them away.

Tinne Claes is a postdoctoral fellow of the Research Council of Flanders and the University of Leuven. In her PhD research, she related the development of anatomy as a medical discipline to changing sensitivities surrounding death and the body, and to social and political tensions. This research has resulted in several publications, including in Social History of Medicine and The Journal of the History of Collections.

Reconsidering the period room as a museum-made object