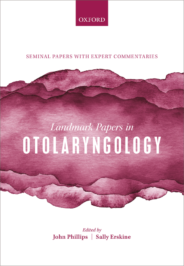 In July this year, NHS England announced that it planned to cease funding four surgical procedures entirely, and to limit funding for thirteen others. Within this list of procedures, three ear, nose and throat procedures were identified: tonsillectomy for tonsillitis, grommet insertion for glue ear and surgery for snoring. The mainstream media provided mixed opinions, from supporting the Department of Health’s aspiration to reduce the provision for “unnecessary or risky procedures”, to outcry that essential treatments would become unavailable. Some commentators have reported that “…sometimes doing nothing, or doing less, really is the best approach”.

As doctors, we are taught to examine the available evidence and provide balanced advice to aid our patients in determining the best treatment for their individual circumstances. The basis of guidelines and contemporary clinical practice is often from ‘landmark’ papers in the field, but despite the frequency with which certain ear, nose and throat procedures are performed, there remains a distinct paucity of high-quality research. For example, a Cochrane review of tonsillectomy, involving a search of all published scientific literature, concluded that, for children, “tonsillectomy leads to a reduction in the number of days with sore throat in the first year after surgery”, but the size of the effect is very modest; this means that further research is likely to have an important impact on how confident we are in the results and may change those results. The quality of evidence for tonsillectomy in adults is low. Tens of thousands of tonsillectomies are performed every year in the United Kingdom but, due to the lack of good evidence available, many national guidelines are primarily based on a single study performed over thirty years ago.

Grommet surgery has been performed regularly in ENT practice since 1945.  Strict guidelines from NICE have been in place for many years to guide who should be offered surgery, and evidence supports that the procedure provides short term benefits in hearing which diminish after six to nine months in healthy children. This may seem a short period of time, but six to nine months can span the majority of an academic year, during which a child may fall behind as a consequence of their hearing loss, leading to potential loss of educational opportunities, poor behaviour, and balance issues. This can have a further impact on a child’s confidence moving forward, even when hearing improves, and have implications for forming relationships with their peers.  An alternative to having grommets inserted is to adopt a ‘watch and wait’ policy, but there are potential risks for adopting this approach, which have been publicised in the press.

Cochrane have provided their own conclusions based on the available evidence, and their systematic review found the quality of the evidence for the placement of grommets in children with recurring acute middle ear infections to be “low to very low”.

Snoring can also be a very troublesome problem for patients and their families. Surgery for snoring can reduce apnoea, the most serious associated symptom, by up to 50%, but is now rarely available on the NHS and, in light of the Department of Health announcement, this snoring surgery is set to all but disappear. Whilst surgery has always been a last resort for snoring, snoring can have widespread implications not only for the snorer, who may have a disturbed sleep affecting productivity, but also for their bed partner, who will suffer a poor night’s sleep also.

‘Absence of evidence is not evidence of absence’

The NHS has always operated within a sensitive financial and political framework. In a healthcare system that has limited funds and increasing demands, the funding of healthcare interventions has to be somehow rationalised.  As doctors, our primary goal is to provide the best care for the individual patient sitting in front of us. If we are to justify the provision of surgical procedures for our patients, we need to either cite the evidence to support these interventions, or be striving to develop research strategies to address the many gaps in our evidence base.

Featured Image Credit: “Portrait of woman who can not sleep because her husband snores” by Josep Suria. Used under licence via Shutterstock.

Sally Erskine has a strong academic background in ENT, and is currently training to become a GP after recently been awarded an MD from the University of East Anglia for her work into the impact of chronic rhinosinusitis.

John Phillips and Sally Erskine are the editors of Landmark Papers in Otolaryngology, now available in print.