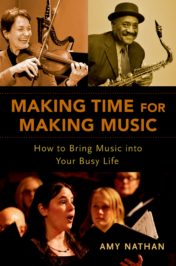 Making Time for Making Music: How to Bring Music into Your Busy Life

“It’s such a big deal for non-pros to come in and play with the orchestra, throwing themselves into the ‘deep end.’ Our orchestra musicians are respectful and supportive of them,” says Larissa Agosti, who coordinates the Edmonton Symphony Orchestra’s Rusty Musicians and B-Sides programs, which let avocational musicians perform side-by-side with this Canadian orchestra’s pros.

Avocational musicians can use some encouragement, according to the more than 300 non-pros interviewed for the book Making Time for Making Music. Nagging feelings of self-doubt in their musical skills blocked many for a while from doing what they have since come to love—making music in their spare time. Finding supportive ensembles, teachers, and Meetup groups helped many take the plunge. Now, professional orchestras have joined the avocational-musician support team, spurred by the success of the Baltimore Symphony’s programs for non-pros that began in 2010.

Marin Alsop had launched Rusty Musicians programs earlier with the Bournemouth Symphony in the UK (which still has them) before introducing them in the U.S. when she became the Baltimore Symphony’s music director. Rusty Musicians programs invite avocational musicians to sign up, without an audition, to sit side-by-side with the orchestra’s pros to rehearse classical repertoire under a professional conductor’s baton. As a one-day experience, this is an affordable option for an orchestra, with moderate tuition fees covering expenses. Several other orchestras now offer similar programs: Edmonton’s B-Sides, the Richmond Symphony’s Come and Play, the Pacific Symphony’s OC Can You Play With Us, and the Columbus Symphony’s Side-by-Side with the CSO. One Columbus participant notes, “This was a life changing event for me.” Another adds, “To be surrounded by strings and woodwinds and brass and all the percussion—it was incredible.”

The Baltimore Symphony also introduced a more comprehensive, weeklong program for non-pros: BSO Academy Week. Again, there is no audition, but music-reading ability is a must. For a week during the summer, non-pros rehearse, coached by BSO musicians, and also attend lectures and workshops. At the final performance, they sit side-by-side on stage with the BSO. There is a chamber music option and an educator track, offering credits from a local university. “We cheer people on, encourage them to do the best that they can, and be happy, even if it’s not technically perfect,” says Jane Marvine, the BSO English horn player who helped create Academy Week.

A weeklong program is more costly than a one-day affair, both for the orchestra and for participants, although the Baltimore Symphony has a grant which lets it offer some financial aid. Even so, other orchestras have adopted this format, including the Edmonton Symphony with its Rusty Musicians Summer Camp. The Buffalo Philharmonic teams up with the World Doctors Orchestra for a five-day summer option. This fall, the Pacific Symphony is offering a modified version of this format—a Chamber Edition, with fewer pros from the orchestra needing to be paid to serve as coaches than with a full orchestra program. Non-pros are grouped into five chamber ensembles that have three rehearsals each over a month, leading to a concert performance.

The goal for these programs is to serve “as a community builder,” explains Edmonton’s Larissa Agosti, “to connect the orchestra with the community.” Alison Levinson, director of arts engagement for the Pacific Symphony, notes that there is a “robust community of avocational musicians in Orange County, with a lot of community ensembles. We are looking for a way to draw them closer to us and for us to be a resource for them.” Many who sign up for the Pacific Symphony’s side-by-sides are experienced players who want to step up their musicianship and also do some networking, learning from each other about local non-pro ensembles to join. “It’s important to know what’s going on in the community,” adds Ms. Levinson, “so the big orchestra in town isn’t usurping small community ensembles that are already doing great work.”

The Detroit Symphony Orchestra supports avocational musicians by creating its own community band and orchestra for local non-pros to join, with DSO musicians leading sectionals, conducting, and sometimes performing as soloists. “Many people leave the music world because of the pressure to be perfect,” says Nelson Rodríguez-Parada, the ensembles’ manager. “I’ve tried to remove those notions. We can still strive for excellence, but let’s manage expectations. What’s the difference if the musicians and audience are truly enjoying themselves.”

The Berlin Philharmonic had a more global goal in mind for its BE PHIL ensemble, organized in 2018. It invited non-pros from around the world to send in a videotaped audition. After receiving 1,900 applications, a jury of 12 Philharmonikers selected 101 non-pros from about thirty countries to come to Berlin to perform Brahms First Symphony. A Berlin Phil violinist rehearsed them for two days and then its music director, Sir Simon Rattle, rehearsed the non-pros for another two days and conducted the final performance. “He said it made no difference whether they are professional or amateurs, it’s about people who love music. He could feel their love for music,” says Andrea Tober, the Berlin Phil’s director of education. Participants had to pay their own travel and hotel expenses, although she hopes to change that next time. “We want to continue this, to spread a message at a time when people talk about separation and building walls. We want to show the idea of coming together—and thinking about things that we share and we all love.”

Amy Nathan, an amateur pianist and choral singer, is an award-winning author of nonfiction books for adults and young people, including three books for Oxford University Press: Making Time for Making Music: How to Bring Music into Your Busy Life; The Music Parents’ Survival Guide: A Parent-to-Parent Conversation; and The Young Musician’s Survival Guide. Other books include: Meet the Musicians, Meet the Dancers, Round and Round Together, Yankee Doodle Gals, Count On Us, Take a Seat-Make A Stand, and The Kids' Allowance Book. A graduate of Harvard with masters' degrees from the Harvard Graduate School of Education and Columbia's Teachers College, she is the mother of two musical sons: her older son is composer Eric Nathan; her younger son is a saxophone-playing political scientist.