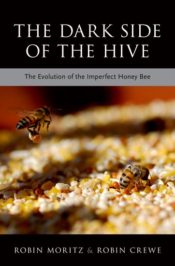 The Dark Side of the Hive: The Evolution of the Imperfect Honeybee

Honey bee colonies have historically been considered as marvels of evolution resulting in perfectly cooperative and harmonious societies, and exemplars of what we humans might achieve. This is an appealing image to many, but it is of course a caricature. Nobody is perfect, not even honey bees. As with any complex social system, honey bee societies are prone to error, robbery and social parasitism. Although there is only a single queen, the honey bee colony is composed of many subfamilies as the queen can mate with over 50 drones, using the sperm from all to produce offspring. The resulting web of subfamilies facilitates worker specialization, but also provides huge potential for intracolonial conflict.

Although efficient mechanisms are in place to prevent overt conflict among the subfamilies in the hive this is far from being perfect, and the apparently harmonious, cooperative whole has a considerable dark side. It is full of individual mistakes, obvious maladaptations and evolutionary dead ends. There is conflict, cheating, worker inefficiency, and unfair reproduction strategies.

The fact that honey bee colonies get by remarkably well in spite of many seemingly odd biological features is surprising. However, these “aberrations” are central to fully understanding the social organization of the colony.

Aberrations observed within colonies include:

Honey bees are an exceptionally successful species with the ability to survive in the wild, in cities, in habitats from deserts to rainforests and even in beekeepers’ boxes. They get by because they have adequate but not perfect skills, and as with all social insects, it is the large number of individuals in the colony that compensates for a lack of perfection.

Robin Moritz is Professor of Molecular Ecology at Martin-Luther-University of Halle-Wittenberg. Robin Crewe is a Senior Research Fellow at the Centre for the Advancement of Scholarship, University of Pretoria. They are the co-authors of The Dark Side of the Hive (OUP, 2018).