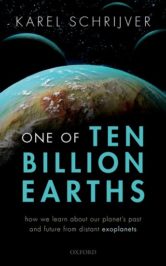 One of Ten Billion Earths: How we Learn about our Planet's Past and Future from Distant Exoplanets

In 1969, half a century ago, astronauts first landed on Earth’s sole moon. The first successful robotic landers touched down on the much more distant Venus and Mars in 1970 and 1976, respectively, and in the same decade spacecraft flybys provided the first, fleeting close-ups of Jupiter and Saturn. It was not until two decades later, however, that missions that explicitly targeted these giant planets revealed how fundamentally distinct these worlds are from our own.

The Galileo satellite started exploring the Jupiter system in late 1995, swinging by moon after moon. The Cassini-Huygens mission reached Saturn in 2004, exploring the giant planet, its rings and satellites, and even sending a lander onto Titan, the only moon in the solar system with a substantial atmosphere. These spacecraft uncovered a fascinating diversity of environments on dozens of moons: many are cold worlds enrobed in miles-thick ice; some with volcanoes spewing molten rock but others whose volcanoes somehow gush liquid water or nitrogen; and then there is Titan with its seas of liquid methane and ethane. Their pictures are as stunning and diverse as the scientific discoveries enabled by these spacecraft.

As the close-up exploration of the largest planets in the solar system got underway, a revolution was about to befall astronomers looking much further out. It started in 1995 with the announcement of the first exoplanet, now known as 51 Pegasi b, orbiting a star like our own Sun. There are now some 4,000 exoplanetary systems on the books (more than half found with NASA’s Kepler satellite), but the number expected to exist is vastly larger: by carefully quantifying what our available methods can and cannot observe, scientists estimate that there are over a hundred billion planetary systems in our Milky Way galaxy alone, with perhaps some ten billion planets with some similarity to Earth.

Apart from its very existence, 51 Pegasi b had another surprise in store: at 150 Earth masses and orbiting its star almost 20 times closer than Earth does the Sun, this “hot Jupiter” should not have existed by theories of the time. These and many subsequent observations have changed our ideas on how planetary systems form and evolve: we now realize that orbits can change so that planets may be discovered well away from where they formed; planets can engage in gravitational fights that can cause losers to be ejected as lone “nomads” into interstellar space; planets exist that have two stars to cast twin shadows on their surfaces; … Many planets orbit their stars at distances where water, if there is any, may exist in liquid form on their surface for billions of years, as enabled Earth the development of life.

These discoveries have intensified the astronomers’ hunt for extraterrestrial life in which also solar-system scientists participate. Organic molecules cause the haze in the icy-cold atmosphere of Saturn’s Titan and are vented in cry-volcanic plumes rising from the ice-locked deep ocean of Saturn’s Enceladus. There are many sizable moons and dwarf planets in the solar system that are rich in water, although most of it is frozen solid. The combination of liquids and organics in many places around our solar system fuels theories of life and plans for space missions designed to look for life near to home.

But exoplanet astronomers have the advantage of the vast number of systems. Their challenge is that even the largest telescopes cannot image exoplanets any better than as a single dot, and even that only for a few so far. In fact, most of what we learn about exoplanets comes from analyzing how their star’s light is modified in brightness or color by the exoplanets, either by adding some reflected starlight or by taking away some light should they move in front of their star during their orbit. Careful study of these effects as observed with the most powerful telescopes can reveal which gases contribute to the changes. This is already happening, but it will receive a big boost from future telescopes being built, including NASA’s James Webb Space Telescope planned for launch in 2021. So much was discovered in the past 25 years; what will the next decades bring?

Karel Schrijver is a stellar astrophysicist specialized in the study of the Sun and the space around it, stellar magnetism and its impacts on the environments of planets, and space weather. He was lead scientist and Principal Investigator on two of NASA's scientific spacecraft studying the Sun: TRACE and the Solar Dynamics Observatory. He (co-)authored over 200 research publications and articles. He wrote a textbook on solar and stellar magnetism, was lead editor on the five-volume series of Heliophysics books, and co-authored a popular science book entitled Living with the Stars (OUP, 2015) about the connections between the human body, the Earth, the planets, and the stars. He is the author of One of Ten Billion Earths (OUP, 2018).