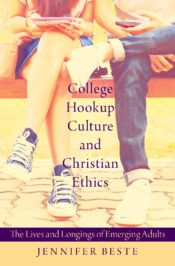 A note from the editor:

Dear reader: Dr. Jennifer Beste is the College of Saint Benedict Koch Professor of Catholic Thought and Culture at the College of Saint Benedict and Saint John’s University. She is author of College Hookup Culture and Christian Ethics: The Lives and Longings of Emerging Adults (Oxford University Press, 2018) and God and the Victim: Traumatic Intrusions on Grace and Freedom (Oxford University Press, 2007). Her areas of teaching and research include trauma theory and Christian theology, sexual ethics, and children, justice, and Catholicism. She enjoys traveling to universities to share her research on hookup culture and sexual assault on college campuses. All names used have been changed to protect student anonymity.

If you are interested in this topic, you might want to also listen to “A podcast with Jennifer Beste by OUP Academic” which features Dr. Beste further discussing her research.

Pursuing this question in conversation with undergraduates inside and outside of the classroom for over ten years, I have found that the vast majority of young women experience hookup culture as disempowering. This conclusion is supported by a growing number of social scientists, but the evidence I will share below comes from my own experiences with college students. Here is a sampling of my findings, along with representative student quotations taken from my qualitative research.

My first major research in the area of hookup culture was a three-year project in which a graduate student and I interviewed college sophomores, juniors, and seniors who volunteered to share their honest perspectives and experiences of hookups. Hundreds of students each year added their voices to the project, with many choosing to do so anonymously. Amanda, the only woman during three years of interviews to report a positive overall experience of hookups, attributed this to being careful and deliberate about hookup partners and behaviors, and not letting her friends influence her too much:

Though I value their opinions, it’s important that I think for myself, that I make my own decisions based on my own values and based on how I project that I will later feel about my decisions.

In another research study, spanning another three years, students in my sexual ethics courses became sober ethnographers who observed and analyzed college parties. Asked to pay attention to power dynamics between different groups, the majority of students perceived that white, heterosexual men were the most dominant group at parties. And asked to observe how men’s and women’s bodies were depicted and treated, my students noted ways that sexual objectification of women in hookup culture erodes women’s self-esteem and agency.

A student named Mike echoed many ethnographers’ perceptions when he wrote:

When asked whether they thought their peers were happy at college parties, 10% of my ethnographers said yes, usually citing the positive influences of alcohol as evidence. 90% perceived that their peers were dissatisfied overall with hookups and party culture, especially if you include the morning afterwards when they wake up sober.

According to women in the study, the top four reasons for dissatisfaction were 1) a sense of emptiness and/or loneliness post-hookup, 2) disillusionment and hurt (the ideal of an emotionless, unattached hookup rarely happens in reality), 3) depression and loss of self-esteem, and 4) negative sexual experiences, including assault.

My third research project, another three-year venture, was conducted at a different university than my first two. This time, I engaged in a qualitative analysis of 150 students’ reflections about whether it is possible for hookups to be ethically just. A minority (18% of women and 26% of men) responded that a hookup could be just if free consent, equality, and mutuality are present during the hookup, and if both partners feel positive afterwards. In contrast, 81% of women and 68% of men perceived that hookups fail in reality to be just because it is highly unlikely that respect, free consent, equality, and mutuality would actually be present.

According to many male students, since hookup partners don’t know each other well or feel connected with their partner, they aren’t motivated to care about communication, mutuality, and equality. One male student wrote anonymously:

In a hookup, the sexual activity would be extremely skewed in terms of mutual sex. The possibility of negative ramifications resulting from non-mutual sex are so low that one person is almost always going to take advantage of another person because there was no sort of prior relationship. Both parties do not really owe each other anything, which poses a great risk for unequal sex.

Female respondents agreed, emphasizing that most hookup sex is “guy sex” that is focused solely on satisfying the man’s desires and pleasure. One anonymous female student said:

When these students were asked in an anonymous survey what kind of sex (equal mutual sex or unequal, non-mutual sex) they found most desirable, arousing, and pleasurable, men’s responses were mixed while 100% of women described equal mutual sex as the most desirable, arousing, and pleasurable sex imaginable. In contrast, they used words like aggressive, demeaning, painful, humiliating, and terrifying to describe sex that was unequal and non-mutual.

Despite women’s preferences, both genders in the survey perceived that unequal, non-mutual sex, which takes place most frequently in hookups, is the most prevalent kind of sex experienced by college students. A female student wrote anonymously:

Of course unequal, non-mutual sex isn’t as desirable as equal sex, but I’m sure it occurs more often between people in our age group. Why? People want love, acceptance, sex, and companionship. But they can’t have it all, so some things have to give. And sometimes sex is that thing.

Readers, of course, will want to test their own knowledge and past experiences against the dominant themes that emerged from my engagement with undergraduate “insiders” at two different universities. From my own vantage point as professor and qualitative researcher, the prospect of women’s sexual empowerment through casual hookups is bleak—unless we have so regressed as a society that women’s empowerment has been rebranded as a “momentary boost” in self-esteem from performing sexual favors and receiving temporary male approval.

[1] The percentage of student in this survey do not equal 100 because a minority of students did not directly answer the question.