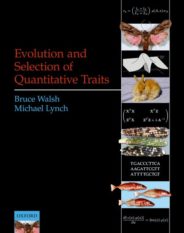 Evolution and Selection of Quantitative Traits

One of the more satisfying aspects of science is that an often fairly technical or obscure idea from one field can later turn out to be a key guiding principle in another, rather distant, field. One such example is a historical result from the theory of animal breeding that now provides critical insight into the way evolution structures genomes.

One of the early observations from DNA sequencing studies was the finding that regions where the rate of gene exchange between chromosomal pairs (recombination) is low tend to show much less variation. The mechanism initially proposed for this removal of variation was the fixation of favorable new mutations. When a beneficial mutation sweeps through a population, it results in nearby chromosomal sites all tracing back to the rather recent common ancestral sequence on which the original mutation arose. This shorter time back to a common ancestor results in much less time for new variation to arise via mutation. However, it was later pointed out that the same observation of an inverse correlation between rates of variation and recombination could be generated simply by the removal of deleterious new mutations by selection. Hence, both adaptive (fixing new good mutations) and status-quo (removing new deleterious mutations) processes could generate such a pattern. As whole genome sequencing progressed, more fine-scale patterns were observed (such as differences in the use of preferred codons), not just over regions of chromosomes, but on a much smaller scale, such as within single genes.

Science is at its most exciting when it harvests from a number of apparently disjoint fields, but this is often hampered by a low rate of exchange of ideas between fields.

Moving from the whole-genome sequencing of this century back to 1966, two animal breeders, Bill Hill and Alan Robertson at the University of Edinburgh, were interested in the impact on a gene under selection (either favorable or deleterious) from additional selection at a nearby (linked) site. Their rather esoteric theoretical study, for which the authors never envisioned having any hard data to fully vet, was concerned with the rates of advance of favorable traits under artificial selection by breeders. Their finding, now called the Hill-Robertson (HR) effect, was that selection (of any type, positive or negative) at one site makes selection at nearby sites less effective. Hence, if there is nearby selection, a favorable allele is slightly less likely, and an unfavorable allele is slightly more likely, to spread through a population. In regions of the genome where the rate of recombination is reduced, the reach of this effect is more extensive.

This key principle is now being applied to examine how the strength of evolutionary forces varies across a genome. Regions with a history of being under stronger selection often tend to show more divergence between populations. The HR interpretation of this result is an increase in the fixation of slightly deleterious mutations due to reduced efficiency of selection from the impact of nearby selected sites. Likewise, numerous features, such as differences in the codon preferences rates within genes (lower bias within some long genes) is now viewed through the HR lens, in that selection, either for newly favorable mutations or to remove nearby deleterious mutations, makes selection less effective overall, allowing weakly deleterious mutations to behave as if they are effectively neutral. Ironically, the HR effect suggests that more genes within a genome perform as if they are essentially selectively neutral because selection is so widespread in the genome

The most extreme manifestation of the HR effect comes back full circle to its breeding roots, in examining the impact of domestication. When ancestral progenitors are compared, whole-genome sequencing often shows an excess of deleterious alleles in the domesticated species. This is especially true in plants such as rice that are largely selfing (and hence have a large chromosomal range over which HR effects can operate due to a reduction in the effective recombination rate). Selection for domestication genes by ancient breeders resulted in a reduction in the efficiency of selection on nearby weakly selected sites (most of which were deleterious). The result is a cost of domestication, wherein a domesticated genome may be enriched (often significantly so) for deleterious mutations that are otherwise weeded out of natural populations. As a result, many of our domesticated species are burdened with deleterious alleles that are very uncommon in natural populations. The use of gene-editing to replace these deleterious copies with more fit alleles from wild populations may offer a rapid path for crop improvement.

Quantitative genetics, the field of the genetics and evolution of traits determined by variation in a number of genes coupled with environmental variation, contains many such examples wherein ideas from one field enhance our understanding of another. For example, human geneticists can gather important insight on the genetic structure of disease genes from the extensive gene mapping studies in maize, and important principles of evolution in natural populations can be gleaned from plant and animal breeders. Science is at its most exciting when it harvests from a number of apparently disjoint fields, but this is often hampered by a low rate of exchange of ideas between fields. In this age of ever-increasing specialization, training our next generation of scientists to be more widely read is both a challenge and an exciting opportunity.

Bruce Walsh is Professor of Ecology and Evolutionary Biology at the University of Arizona. His book, Evolution and Selection of Quantitative Traits, coauthored with Michael Lynch, details the theory and empirical data concerning the evolution of complex traits, from applied breeding to genomic features.