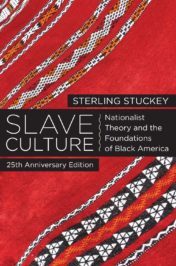 Many of us at Oxford noted with sadness the death of Sterling Stuckey on August 15th at the age of 86. Stuckey was the author of Slave Culture: Nationalist Theory and the Foundations of Black America, which OUP first published in 1987 and re-issued 25 years later, and which was a foundational text in our understanding of the culture of slavery—its complexity and richness in its defining forms of resistance, resilience, and celebration. “Though slave culture was treated for centuries as inferior, it was the lasting contribution of slaves to create an artistic yield that matched their enormous gift of labor, in tobacco and cotton,” Stuckey wrote in his preface.

As an editor, I helped Sterling bring out out the 25th anniversary edition of Slave Culture and got to know him well. We met once a year, usually in September, when he came to New York to listen to some jazz, meet with friends, and talk about books and new projects. He once gave me a copy of his mother’s poems, of which he was very proud. I was honored by the gift. We were to meet in a few weeks to talk about his new project, which involves Moby Dick, and specifically the degree to which Herman Melville was indebted to Frederick Douglass in the inspiration for and conception of the novel. The Great White Whale represents American slavery, he argues (the character of Pip is actually Douglass himself). Sterling was excited about setting off to make his case. I was looking forward to that conversation and where it would take us. We would also likely have talked about his long-planned biography of Paul Robeson, one of his heroes (and whom he had met, just as he had W. E. B. Du Bois), a project he was determined, one day, to finish.

You can read Stuckey’s obituary in The New York Times.

Sterling Stuckey was a renowned Historian and Professor Emeritus of History specializing in American slavery at University of California, Riverside.

Tim Bent is the Executive Editor of Trade History at Oxford University Press.

Why the past is disputed and academic historians (don’t) matter