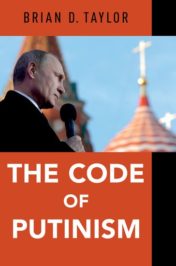 The Code of Putinism

Russia may seem to be on the march globally, but at home Russia is running in place.

This inertia is the flip side of Putin’s domestic image as stability tsar, bringing an end to the “wild 90s” that followed the Soviet collapse.  Back in 2010, Putin credited his policies with Russia’s successful bid to host the World Cup. “In Russia there is political and socio-economic stability,” he crowed. “This gave us the chance to win.”

Now, Russia’s World Cup has come and gone, but stability has given way to stagnation. Putin’s obdurate mentality and an outmoded governance model are holding Russia back.

For Russians, stability is no longer enough after Putin’s 18 years in power. The number of citizens who think the country needs “fundamental changes” has doubled in the last 6 years.  A recent poll showed that a majority of 56 percent of respondents opt for reform, compared to 44 percent who think that “stability is more important than change.”

It’s easy to explain this growing demand for change. During Putin’s first nine years in power (2000-2008), the economy grew at almost 7 percent per year, and incomes more than doubled. In the last nine years (2009-2017), however, growth has been anemic, less than 1 percent per year.  Russia’s economy is now smaller than Canada’s.

This trend is not likely to change. Russian and foreign experts predict that for the next 6 years growth will be no more than 1-2 percent, below the world average. Putin has been forced to embrace painful reforms he once vowed never to support, such as raising the country’s pension age. He has promised a “decisive leap forward” in his fourth term as president, claiming that he will create a “modern system of effective governance.”

But his new government looks a lot like the old one, with many of the country’s key positions occupied by old loyalists from either St. Petersburg or the KGB, including Prime Minister Dmitry Medvedev, the National Security Advisor, the chief of the powerful Federal Security Service, the heads of state gas and oil giants Gazprom and Rosneft, and many other posts.

It’s the same old crew and, more importantly, the same old mindset. Since early in Putin’s rule, his team has been guided by a relatively fixed mentality. This worldview stresses the need for a strong state to protect Russia against internal and external enemies; it prioritizes the group over the individual and order and tradition over change and reform. This core idea is reinforced by habits of control and loyalty acquired under the Soviet state, especially within its security organs, and gut-level resentment about Russia’s global loss of status.

This Putinist outlook has powerfully shaped Russia’s political – and economic – trajectory.  It explains Putin’s two-decade campaign to restore what he sees as Russia’s rightful place in the world, but also inhibits any possible domestic breakthrough going forward.

Russia frequently lags behind its peers – not just traditional Western rivals like the United States, the United Kingdom, and Germany, but also rising middle-income countries like China, India, Malaysia, and even struggling Brazil – in cross-national measures of good governance.  Low productivity and investment make an economic breakthrough unlikely, particularly given a shrinking labor force.

Putin’s need to be in the driver’s seat – he once called for a long period of “manual steering”– and his fear of disorder means that societal innovation and entrepreneurship are stifled by an overbearing state.

As a result, Russia is simultaneously underperforming at home and overambitious abroad.

Russians have generally welcomed the stability that Putin has brought, and see no alternative to his rule – in part because the Kremlin has made sure that no viable contenders can get any traction. Putin is secure in the Kremlin, at least for now.

Two unalterable factors, however, make Putin more vulnerable to unexpected challenges as time goes on: his advancing age (he will turn 66 later this year) and his lame-duck status (he cannot seek re-election in 2024 under the Constitution). Both the search for a successor and attempts to alter the rules of the game to keep the ruling group in power have been catalysts for domestic upheaval and regime change elsewhere in Eurasia – most recently in Armenia in May 2018.

Predicting revolution is a mug’s game.  And given his remarkable run in power, it would be foolish to count Putin out, especially at a time when the Western international order is in such disarray. Continued stagnation seems the most likely outcome. Even so, breakdown seems at least as likely as Putin’s promised breakthrough. 18 years of Putinism show that he is incapable of casting off his resentments, his need for control, and his rigid and statist worldview to embrace the meaningful change that a majority of Russians now say they want.

Brian D. Taylor is Professor and Chair of Political Science, Maxwell School of Citizenship and Public Affairs, Syracuse University. He is the author of State Building in Putin's Russia: Policing and Coercion after Communism (2011), Politics and the Russian Army: Civil-Military Relations, 1689-2000 (2003) and The Code of Putinism.