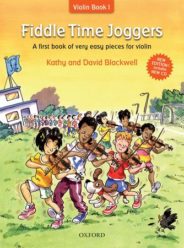 In England, we have the expression ‘Carrying coals to Newcastle’ – a pointless action, since the place in question already has a bountiful supply. In Spain, they take oranges to Valencia and in Portugal, honey to a bee-keeper. If not quite as plentiful as oranges or honey, publishers’ lists are filled with beginner violin repertoire – what possible motivation could there be to write and publish more?

In the mid-1990s, we were directing a beginner string group in Oxfordshire. With pupils from different teachers all learning different repertoire, we decided to level the playing field and write some new pieces unfamiliar to all. And thus ‘Katie’s waltz’, ‘Rhythm fever’ and ‘Happy go lucky’ were born.

Children can be the sternest critics, not holding back in pulling a face or telling you something is boring. We reasoned that we needed to write instantly appealing tunes, with catchy rhythms and in a variety of styles that would cut through any after-school ennui. Furthermore, they had to be carefully written at the technical level of the students and – a crucial point! – make the students sound good. We’d be the first to acknowledge that many other writers have set out with the same intention and realised the same aims, but hearing students around the world, live or online, playing and enjoying our music, suggests this approach has near universal appeal.

Instrumental tuition has changed greatly over the last 20 years. While private music teaching has remained largely unchanged, teaching in schools has been transformed, with individual lessons yielding to groups and the duration of lessons becoming ever shorter. There’s also been the advent of whole-class lessons, first as Wider Ops, later as First Access, in which all the pupils in a primary-school class learn an instrument all together. Happily, the short beginner tunes we wrote 20 years ago have proved to be just as relevant in these more pressured teaching environments.

With whole-class teaching, traditional music stands for two players are dispensed with, and the music is projected onto a white board at the front of the class for all players to read. A clever piece of software co-ordinates the notation and backing track, highlighting the music as it’s played and even turning the page at the right moment. This is a teaching method and technology undreamt of 20 years ago. Back then, few music books were published with any audio – cassettes (remember those?) were briefly considered for our first books, but it was five years later that we issued the first CDs. Now even these are becoming obsolete, as most users have no CD player or CD drive in their laptops, and downloadable mp3 recordings are the audio delivery of choice.

If life, famously, is ‘just one damn thing after another’ (Elbert Hubbard), then so, it seems, is a successful book series. Having got beginner violinists started, ‘jogging’ with the first finger pattern and ‘running’ with different finger patterns, it was inevitable that soon they’d need a book to help them ‘sprint’ into higher positions. A key driver for the series has been teachers writing to ask for material at ever-higher technical levels – even if the relationship between the number of students learning an instrument and technical level is pyramid shaped, with many more starting than getting to the top – there’s still a need to cater for these more advanced students with additional performance repertoire.

Writing these pieces has put us in touch with string teachers in many different countries, and we’ve presented workshops and attended conferences in the UK, across Europe, through the good offices of the European String Teachers Association, as well as Australia, Hong Kong, and Singapore.

It’s fascinating to see the similarities and differences in string teaching around the world, while recognising that we’re all working to the same objectives. We’ve heard some wonderful and inspiring stories. In Portugal, a teacher told us that when her group played our ensemble piece ‘Shark attack!’, the students, to get into the spirit, wore shark hats that they’d knitted specially, with a fin at the back and large bug eyes at the front.

We’re thrilled also that our music is played by Sounds of Palestine, a community music project that provides a safe space for children and which uses music education as a medium to achieve long-term social change for families living in refugee camps and scarred by war and conflict.

We’re glad, 20 years ago, that we decided to take those coals to Newcastle.

Kathy and David Blackwell both studied music at Edinburgh University. Kathy is a string teacher with many years of experience teaching violin and viola, and has worked for Music Services and privately. After a career in music publishing, David now works as a freelance composer and arranger, and has published educational music for strings and for piano, and choral and organ music.