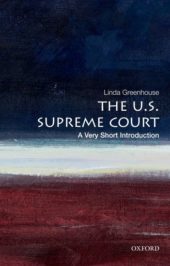 The US Supreme Court: A Very Short Introduction

Justice Byron R. White, who served on the Supreme Court for 31 years (1962-1993), once observed that every time a new justice joins the court, it’s a new court.

His observation may sound counter-intuitive: after all, a new justice joins eight incumbents. Can a single new member make such a difference? But consider the dynamics of an institution in which each of the nine members has an equal vote, and where no one can accomplish anything without persuading colleagues to go along – four other justices, in the case of crafting a majority opinion, and three others when it comes to adding new cases to the court’s docket. While most justices do choose to retire rather than take literally the Constitution’s promise of life tenure, they typically serve for decades. They get to know each other very well. Each departure and each new arrival up-ends established patterns and presents a shock to the system.

And certainly, a Supreme Court vacancy is a shock to the political system. In the afternoon of June 27, 2018, when Justice Anthony M. Kennedy announced his decision to retire, time in Washington, D.C. seemed to stand still, at least in the moments before the partisan contenders caught their collective breath and took to their battle stations in anticipation that President Trump would soon choose a nominee. Among the questions: would the Democrats try to pay back the Republicans for the Senate’s unprecedented stonewalling of President Obama’s last Supreme Court nominee, Merrick Garland? Would President Trump’s replacement for Justice Kennedy, a 30-year veteran who had long been the “swing justice” on a polarized court, finally bring about the conservative triumph that had proven elusive for a generation, despite the fact that during the last half-century, Republican presidents have succeeded in naming 13 Supreme Court justices while Democrats have appointed only four?

On July 9, President Trump nominated Judge Brett Kavanaugh of the United States Court of Appeals for the District of Columbia Circuit. Judge Kavanaugh, long a familiar figure in Washington legal circles, was himself a law clerk to Justice Kennedy. Clearly, he knows the Supreme Court very well. Whether the American public will get to know him well depends in part on how probing senators are during his confirmation hearing, and on how forthcoming he chooses to be in answer to their questions. President Trump’s first Supreme Court nominee, Judge Neil Gorsuch, answered almost none of the senators’ questions. He was confirmed by a party-line vote of 54 to 45 to the seat President Obama had intended for Judge Garland. Only three Democrats joined all the Senate’s Republicans in voting for confirmation.

So as the country turns its attention, however fleetingly, to the Supreme Court, here are some often overlooked points to keep in mind.

The Supreme Court sets our legal agenda. One of the court’s most important but least understood functions is deciding what to decide. Unlike most appellate courts, which have to decide all the properly presented cases that reach them, the Supreme Court has nearly unfettered discretion to choose the cases it wants to decide. And in making those choices–roughly 70 cases out of the 7,000 or so that reach the court every term–the justices necessarily set the country’s legal agenda.

In the country’s history, there have been only 113 Supreme Court justices.

It takes the votes of four justices to grant a case for argument and decision. The most obvious reason for granting a case is what the court calls a “conflict in the circuits”–when two or more of the federal appellate courts, organized into 13 circuits, have disagreed on the meaning of a statute or the constitutionality of an official action, the justices feel an obligation to provide a uniform national rule.

But there are other reasons for granting a “petition for a writ of certiorari,” or “granting cert,” as the court calls the decision to accept a new case. One reason is that the case offers a group of justices the chance to move the law in the desired direction, to accomplish a particular agenda.

Yes, the Supreme Court justices respect precedent, but respect goes only so far. To the extent that Supreme Court nominees say anything at their confirmation hearings, they express respect for the body of precedent that they will inherit as new Supreme Court justices. The rule of adherence precedent, known by the Latin phrase stare decisis, meaning to stand by what has been decided, is indeed important because without it, every day would be a new day and every argument could be considered afresh. But as every Supreme Court nominee surely knows, and as the senators should, stare decisis “is not an inexorable command,” as the late Chief Justice Rehnquist put it in a 1989 decision.

Lower courts are bound by Supreme Court precedent, but the Supreme Court itself is free to change its mind with the vote of five justices.

Extreme polarization is the exception, not the norm. In the final decade of Justice Kennedy’s long tenure, it was common to hear references to the “Kennedy Court,” meaning that in many important cases, there were four votes on one side, four on the other, with Justice Kennedy in the position to determine the outcome. This happened so often (last term’s decision upholding President Trump’s Muslim entry ban being one example and the 2015 decision recognizing a constitutional right to same-sex marriage being another that we have come to think of the situation as normal.

But it’s a historical anomaly.

Certainly, the polarized court reflects the country’s polarization, including the politically charged confirmation process of recent years. As a result, the court finds itself in a delicate, even perilous situation. At what point does the public come to see the justices as simply politicians in robes? How can the court maintain the public’s trust? In Justice Byron White’s words, a new Supreme Court is about to be born. Its future, our future, is in its hands.

Linda Greenhouse was the New York Times Supreme Court correspondent for 30 years, covering thousands of decisions written by 18 different justices. She was awarded a Pulitzer Prize in journalism (beat reporting) in 1998. She in now Knight Distinguished Journalist in Residence and Joseph Goldstein Lecturer in Law at Yale Law School and writes a biweekly opinion column on the Supreme Court and the law for the New York Times web site. Her books include Becoming Justice Blackmun: Harry Blackmun's Supreme Court Journey and Before Roe v. Wade: Voices That Shaped the Abortion Debate Before the Supreme Court's Ruling (with Reva B. Siegel).

Linda will be speaking at the Center for Jewish History with ACLU National Legal Director David Cole on 05 September as part of the Short Talks on Big Subjects series.