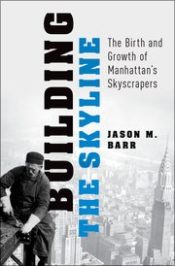 Building the Skyline: The Birth and Growth of Manhattan's Skyscrapers

In today’s world of big data and mass media saturation, statistics and graphs are constantly being thrown at us. For researchers, wading through, and making sense of, the sea of numbers is as much about the journey as the destination. But for most people who are simply trying to live their lives, all these facts and figures appear like so much street noise to be filtered out, or flies to be swatted away.

When economic data is used to comprehend the world around us, we tend to focus on a handful of well-known and easily understood statistics, like the growth rate of output (Gross Domestic Product, or GDP), or changes in stock prices. While these statistics are key to understanding our economy as a whole, they are not measuring our everyday needs and experiences; and, they pertain mostly to money and income.

A large body of social science research on well-being, however, shows that income is only one small component of life satisfaction. Just as important—if not more—is our health and the quality of our social interactions—a feeling of connectedness to friends, family, and community. Do we have people to rely on in times of need? Do we have access to affordable and reliable medical care? Do we trust our neighbors and feel secure in our neighborhoods? These are what really matter to us; and these are what need to be measured.

It is time we quantified how the important things around us determine our well-being and our government creates a quality of life measure that is as widely used and understood as that of say Gross Domestic Product (GDP), and focuses on making sure our society provides us with more of what makes us satisfied with our lives. It is time our governments create both a national and a local Well-being Index (WBI).

The WBI would offer a simplified measure about the key elements that make us satisfied with our lives. It would tell us about economic growth, but would also include the other key things that determine life satisfaction. A good model was created in 2015 for New York City. The Center for Innovation through Data Intelligence (CIDI) funded the creation of a WBI for each neighborhood in the city.

This WBI is calculated based on data about five main categories: health, income, housing costs, crime and safety, and infrastructure services. In essence, it creates for each neighborhood an indicator of how well that neighborhood is providing for the well-being of its residents. Perhaps not surprisingly, there a lot variation around the city. Manhattan tends to score high, while the Bronx scores lower.

While this New York City WBI is but one of several, they remain just research projects (and perhaps marketing tools). Our political leaders need to create the institutional framework for a uniform government-produced measure of well-being. To be used as a policy tool, the WBI needs to be produced and widely disseminated at least annually, if not quarterly.

Imagine that the Times Square news ticker announced the WBI values for cities or regions around the country? Imagine that the pop-up message on your smartphone indicated that Detroit’s Well-Being Index was the highest in 10 years? Imagine that politicians ran on a platform that promised to increase well-being next year by 6%?

In this time of political divisiveness, governors and mayors can lead the way by formalizing the measurement of well-being. Using the WBI to guide policy decisions, for example, will force leaders to address our nation’s transportation woes. Long commutes in snarling traffic or rides on antiquated subway systems diminish people’s happiness, as well as their health. Paying 40 or 50% of income for housing is another source of anxiety, and would drive lower WBI values.

Mayors, of course, are concerned with these things, but when citizens demand to know from them what they did to raise the WBI, they will have to focus more directly on what people want and need. It can offer a kind of data-oriented voice to how people are feeling and can highlight the source of not only their frustrations, but also those things that give them satisfaction.

The WBI could also help provide an antidote to dark money in campaign finance, which makes it hard to discern whose interests political leaders really have in mind: their constituents or their funders. Changes in the WBI would be the clearest indicator if constituents are really being served by their elected officials.

We could even imagine that cities and regions might someday engage in WBI competition—those cities with the highest index values or greatest well-being growth can set themselves apart from other regions. Businesses will naturally be drawn to those places with high WBIs because of happier workers and better infrastructure.

This kind of municipal competition would have positive spillovers—it would promote happiness and improve life-satisfaction around the country. Each municipality would be forced to answer the questions: What are you doing to make life better for your residents, and what have you done to increase the WBI?

Finally, focusing on the WBI might also help move us away from divisive discussions about tax policies. If leaders can demonstrate that tax revenues are being used for things like transportation improvements, improved educational outcomes, or better healthcare that are, in fact, increasing well-being then it can help provide a clearer nexus between taxation and life-satisfaction.

It is time we put the tools of big data to work for us. The United States is the richest nation on planet Earth, but only ranks 18th in life-satisfaction. We have the means to start making well-being the focus of local and national policy

You will be happy if they did.

Jason M. Barr is a Professor of Economics at Rutgers University-Newark. He is the author of the Skynomics Blog and Building the Skyline: The Birth and Growth of Manhattan’s Skyscrapers (Oxford University Press).

The long-term effects of life events on happiness are overestimated