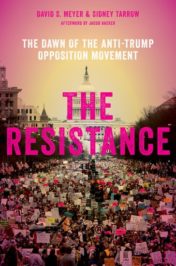 The Resistance: The Dawn of the Anti-Trump Opposition Movement

The 114th American Political Science Association Annual Meeting & Exhibition will be held in Boston this year from August 30th – September 2nd. This year’s conference theme “Democracy and Its Discontents,” explores the challenges facing democracy in the U.S. and in emerging democracies around the world. Drop by the OUP booth (#315) to visit with our attending staff and to see our newest books including leading work in the field and APSA award-winning titles. There are also several OUP authors on various panels throughout the conference. Here are just a few panels we are looking forward to:

In this roundtable, presenters Daniel W. Drezner, Alexandra Guisinger, Sarah E. Kreps, John J. Mearsheimer, John Schuessler, and Elizabeth Nathan Saunders (chair) revisit the democratic nature of American Foreign Policy. “How democratic is American foreign policy? How democratic should it be? To be more specific, to what extent does the direction of American foreign policy lie in the hands of an elite establishment versus the public at large? And what difference does it make – for better or for worse?”

David S. Meyer chairs the panel of new scholarly work on mass protests across the globe. “This panel will present four papers, all of which seek new methodological tools, data and theoretical approaches in order to facilitate the analysis of mass protest. All of the papers are exploring cutting-edge methods and research design in studying mass protest.”

Deondra Rose presents “Politics and the Hist. of Lawmakers’ Reluctance to Regulate For-Profit Colleges” in this panel. “Using primary and secondary sources, including the Congressional Record, transcripts from House and Senate committee proceedings, government reports, and historical newspapers, this paper examines the history of government activities related to for-profit higher education, paying particular attention to the question of why the government has failed to effectively crack down on an industry that targets vulnerable populations like military veterans, low-income citizens, and racial minorities.”

Social Media and the 2016 Presidential Election

Ben Epstein chairs the panel on social media’s impact on the 2016 election. “A variety of social media platforms are explored as they relate to the 2016 Presidential Election. Spoiler alert: social media played a role in the election being more contentious (and Russian) than most.”

“This roundtable brings together a disciplinarily and methodologically diverse group of scholars to discuss the challenges and opportunities of bringing the study of developing country bureaucracies into the mainstream of public administration, and synthesize lessons from their own research for public management research and practice.” Presenters include Yanilda Maria Gonzalez, Mai Omer Hassan, Dan Honig, Ken Ochieng’ Opalo, Daniel Rogger, Johannes Werner Christian Schuster, Martin J. Williams, and Anthony Michael Bertelli (Chair).

William Wohlforth  chairs the panel which sheds lights on the strategies dominate and emerging powers implement to gain and exercise power.

Oligarchic Tendencies in US Politics

While these are only a few of many events taking place at the APSA, the conference program is fully searchable online.

We look forward to seeing you there.

Seth Cotterman is the Marketing Manager of Social Sciences at OUP.