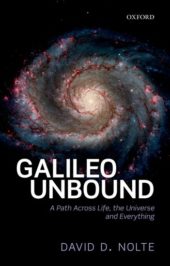 Galileo Unbound: A Path Across Life, the Universe and Everything

A span of nearly 300 years separates Galileo Galilei from Lord Rayleigh—Galileo groping in the dark to perform the earliest quantitative explorations of motion, Lord Rayleigh identifying the key gaps of knowledge at the turn into the 20th century and using his home laboratory to fill them in. But the two scientists are connected by a continuous thread. Three centuries after Galileo discovered the parabolic trajectory, Rayleigh wrote down a fundamentally new equation of motion describing autonomous oscillators that would dominate the field of control theory in the 20th century and ultimately lead to the rise of chaos theory.  The equation’s solution defines a single point that traces out a single continuous curve that arcs through a high-dimensional and abstract space known as phase space. This arc is the distant descendant of Galileo’s parabolic trajectory.

The concept of the system trajectory pervades modern science. From genetic drift to ideal gases to photons orbiting black holes, these motions admit the description of a single point, defining the unique state of a system, moving along a continuous curve in phase space. The complex world we live in is composed of an infinite set of interlinked system trajectories, interwoven into a multidimensional tapestry.  Drawn from this universal backdrop, the same concept that Galileo discovered for a rock thrown from a cliff helped Lord Rayleigh to explain the unearthly behavior of the Aeolian harp.

The Aeolian harp is a stringed musical instrument played by the wind. It was named in antiquity for Aeolus, the keeper of the wind. It has strings of differing gauge and tension stretched lengthwise along a sounding board and tuned to create harmonics. When hung in a confined opening, such as a window or a narrow passageway, the channeled wind causes the strings of the harp to vibrate in resonant sympathy, producing a pleasing ethereal sound.

John Strutt, the third Baron Rayleigh, was fascinated by sound and acoustics. Even on his honeymoon, boating up the Nile in Egypt, he spent much of his time writing his famous treatise The Theory of Sound, published in two volumes in 1877 and 1878, that stand today as a classic in the field. He returned to the physics of sound numerous times during his prolific career. For instance, Rayleigh was fascinated by systems that vibrated with regularity, like violin strings, clarinet reeds, finger glasses, flutes, and organ pipes, and he was particular entranced by the Aeolian harp. In early 1915, Rayleigh tackled the question of how a constant wind can produce a nonconstant dynamical motion. Based on his work on instabilities (for instance the eponymously named Rayleigh-Benard instability) he explained how a vibrating string sheds vortices of air that react back on the string to sustain its vibration.

The Aeolian harp is an example of an oscillator with a steady drive, yet Rayleigh understood that broader classes of sustained oscillations were possible that might be more ubiquitous and more applicable. In a short article for the Philosophical Magazine of London in 1883, titled On Maintained Oscillations, Rayleigh took the equation of a simple driven harmonic oscillator and added a cubic force term.  The cubic force limits the growth of the solution to a steady-state oscillation, known as a limit cycle, that oscillates persistently with constant amplitude and frequency. Nearly 40 years later, the Dutch radio engineer Balthazar van der Pol discovered just such a limit cycle oscillation supported by the space-charge of triode oscillator vacuum tubes. Since then the same equations discovered by Rayleigh and van der Pol have proliferated across broad fields of complex systems. By the middle of the 20th century, autonomous oscillations had become the standard workhorses of control theory. In a nonlinear world, van der Pol’s nonlinear oscillator replaces the simple harmonic oscillator as the fundamental element of dynamical systems. Examples include magnetrons for radar, wheel shimmy of landing gear, and propeller vibrations on aircraft, as well as violin strings and clarinet reeds. The neurons of mind and motion are limit cycle oscillators, as are the pacemaker cells of the heart that beat with confidence a billion times in a lifetime.

David D. Nolte is Edward M. Purcell Distinguished Professor of Physics at Purdue University and is an internationally recognized researcher in laser photonics. He is the author of Introduction to Modern Dynamics: Chaos, Networks, Space and Time (OUP, 2014) and Galileo Unbound: A Path Across Life, the Universe and Everything (OUP, 2018).

The flow of physics