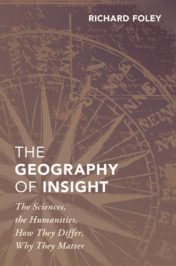 The Geography of Insight: The Sciences, the Humanities, How they Differ, Why They Matter

Due to current political climate, questions on funding, and dwindling enrollment size, academia has never been as challenged as it is today. Richard Foley, a philosopher and former dean, pushes back against these critiques. He spoke to Oxford University Press editor, Peter Ohlin, on why the arts, humanities, and sciences research should be celebrated.

Ohlin: Much of your recent research on the differences between the sciences and humanities is similar to C.P Snow’s famous essay from half a century ago, but you also issue a call for universities to defend a culture of research. What do you mean by “culture of research”?

Foley: Above all it’s a culture that treasures and finds ways to support intellectual achievements, especially long-term ones. Among its presiding values is that not every inquiry should be assessed in terms of immediate usefulness. Many topics are such that it shouldn’t be quick and easy to have opinions about them.

Ohlin: Why is it important for universities to support research?

Foley: Because over the centuries universities have proven to be indispensable for the collection, preservation, and production of knowledge.

Ohlin: Is it still necessary for them to play this role?

Foley: Yes. In the latter part of the twentieth century, it had sometimes seemed as if the battles to value knowledge and expertise were largely over. Now, from a vantage point well into the twenty-first century, it’s painful to see this isn’t the case. Just as universities, as one of the most long-lived of human institutions, have played a crucial role in other epochs in protecting knowledge, they need to do so in our time.

Ohlin: Why is the battle to value knowledge still being fought?

Foley: Political and cultural forces have eroded respect for specialized knowledge and expertise, helped along by the charge that unbiased inquiry and opinion are myths, leftover illusions from simpler times.

Ohlin: Is this charge warranted?

Foley: Human inquirers are imperfect. So perfect neutrality is not in the offing, but disinterestedness can still function as an ideal that inquirers can do better or worse jobs at approximating. Unfortunately, whenever there is imperfection, there are also misdirected impulses to write off whatever is not utterly spotless, which in turn invites a politicization of expertise and even information itself.

Ohlin: What are the effects of this politicization on research universities?

Foley: It contributes to an undermining of their standing of and an erosion of their financial support. It’s more accurate to say, however, that this is so in some regions of the world but not all. A peculiarity of our time is that the United States and United Kingdom, whose research universities have been the envy of the world, seem to be losing their appetite for maintaining them, while other countries that have lacked them are now eagerly building them.

Ohlin: The UK has a long tradition of great universities, but how and when did the US become a leader in higher education?

Foley: The decades following World War II produced a golden period of higher education and research in the US. So successful were the investments during this period that American universities, along with their British counterparts, came to dominate international rankings. According to the “Shanghai Ranking,” 8 of the top 10 research universities of the world are in the US or UK. The London Times Higher Education Ranking reaches similar results: 7 of its top 11 universities are US- or UK-based.

Sometimes the humanities and sciences are thought of as rivals, but a healthy culture for research for both is necessary for either to thrive in the long run.

Ohlin: If support for higher education and research remains tepid in the US and UK, what will be the result?

Foley: Other countries will gladly take their place, thereby attracting a greater share of the top international scholars, the most talented students, and the most important research projects. Indeed, this has already begun to happen. On the other hand, support for research and higher education shouldn’t be seen as a zero-sum game. A continuation of the tradition of strong universities and research cultures in the US and UK is compatible with their development in other parts of the world. There’s no scarcity of important projects waiting to be done, and no foreseeable end to the need for universities to train new generations to students capable of working on them.

Foley: Two commitments have been at the core of universities throughout their long history and remain critical today. The first is a commitment to a long view, with its attendant recognition that many inquiries require long gestation periods. The second is a commitment to a wide view, with an appreciation for the full breadth of issues of interest to humans.

Ohlin: Does this “full breadth of issues” include those addressed by the humanities as well as the sciences?

Foley: Most definitely. Sometimes the humanities and sciences are thought of as rivals, but a healthy culture for research for both is necessary for either to thrive in the long run. The history of computing is a great object lesson. Logics, developed in the late nineteenth and early twentieth centuries by philosophers, were utilized a century later by computer scientists to create electronic circuits of immense power.

Ohlin: How do universities create a healthy research culture for both the humanities and sciences?

Foley: Most of all, they need to understand that the issues, aims, and methods of the humanities and the sciences are different, and this is not to be regretted. On the contrary, it’s a good thing. Their differences complement one another. That which escapes the sciences lies at the heart of the humanities, and the reverse is also true. The sciences provide insights that cannot be delivered by the humanities. It bears repeating that they’re not rivals.

Richard Foley is Professor of Philosophy at New York University. For almost two decades, he served as dean of humanities, social sciences, and sciences, first at Rutgers University and then at NYU. Foley is the author of The Geography of Insight.

How academics can leave the university but stay in academia