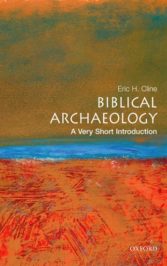 In the following excerpt from Biblical Archaeology: A Very Short Introduction, Eric H. Cline explains the interests of biblical archaeologists, and explores the types of questions that those in the field set out to answer.

While biblical archaeologists working today are generally more interested in learning about details of daily life in the ancient biblical world than proving or disproving the accounts in the Bible, many lay people have these priorities reversed. They want to know: Did the Flood take place? Did Abraham and the Patriarchs exist? Were Sodom and Gomorrah destroyed by fire and brimstone? Did the Exodus occur? These were some of the original questions in biblical archaeology that intrigued the earliest pioneers of the field. They still resonate today but are far from being answered.

Most biblical archaeologists do not deliberately set out to either prove or disprove elements of the Hebrew Bible or the New Testament through archaeology. Instead, they investigate the material culture of the lands and time periods mentioned in the Bible, and the people, places, and events discussed in those ancient texts, in order to bring them to life and to reconstruct the culture and history of the region. This is particularly evident in New Testament archaeology, where the excavation of cities like Caesarea, Capernaum, and Sepphoris has shed light on the social, religious, and geographic situation in the time before, during, and after the life of Jesus.

However, biblical archaeology has generally provided more relevant information that can be correlated with the narratives of the Hebrew Bible than with those of the New Testament. There are several reasons for this disparity. The events depicted in the Hebrew Bible occurred over a much longer time period than those depicted in the New Testament—over millennia rather than over approximately two hundred years. Moreover, the stories and events described in the Hebrew Bible occurred throughout a much larger geographic area than those of the New Testament. The entire Middle East and North Africa provide the backdrop for the stories of the Hebrews, whereas the drama of the early Christians played out mainly in Syro-Palestine and to a lesser extent in ancient Greece and Italy.

For many scholars, the Bible is an important source of data that helps to shed light on ancient life and practices. Leaving aside for the moment the religious significance and the questions of the historical accuracy of the text, there is no question that the Bible is a historical document of seminal importance. It is an ancient source that often contains abundant details and descriptions of the Holy Land in antiquity. It is a source that can be used—with caution—to shed light on the ancient world, just as Syro- Palestinian archaeologists use Egyptian, Neo-Assyrian, or Neo-Babylonian inscriptions covering the same time period.

It is in the question of the historical accuracy of the texts where the interests of professional biblical archaeologists and the educated public overlap, for it is frequently the quintessential biblical questions—the ones that fueled the birth of the field—that still intrigue the public. Did Joshua capture Jericho? Was there someone named Abraham who wandered from Mesopotamia to Canaan? Did David and Solomon exist? Where was Jesus buried? Although biblical archaeology today is a far cry from what it was a hundred or more years ago—it is now more scientifically rigorous, and its practitioners have generally moved on to more anthropologically oriented topics—these basic questions still resonate. Unfortunately, answering them is not always easy.

Eric H. Cline is the former Co-Director of the excavations at Megiddo (biblical Armageddon) and current Co-Director of the excavations at Tel Kabri in Israel. He is Professor of Classics and Anthropology and the former Chair of the Department of Classical and Near Eastern Languages and Civilizations at The George Washington University, in Washington DC. His many books include The Battles of Armageddon: Megiddo and the Jezreel Valley from the Bronze Age to the Nuclear Age (2000); From Eden to Exile: Unraveling Mysteries of the Bible (2007); The Trojan War: A Very Short Introduction (2013); and Three Stones Make a Wall: The Story of Archaeology (2017).

He is also the author of Biblical Archaeology: A Very Short Introduction.

Eric will be speaking at the Center for Jewish History with National Geographic Magazine’s archaeology editor, Kristin Romey, on 28 March as part of Very Short Introductions: Short Talks on Big Subjects.