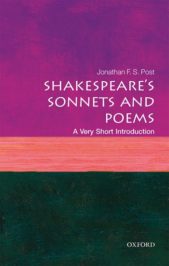 1. Frequency of publication: Of all Shakespeare’s great plays–Romeo and Juliet, Hamlet, King Lear, Macbeth, and Othello–the most frequently published work in his lifetime and for approximately a half century after his death in 1616 was not a drama but his erotic poem, Venus and Adonis. First published in 1593, this fast-paced narrative, based on an incident from Ovid’s Metamorphoses, went through no fewer than ten editions by 1617  and another six by 1640. By comparison, the most frequently published of the plays, Richard III, went through six editions by 1622, the year before the great Folio edition of the plays appeared in print, thus ensuring the separation of the drama from the poetry for several centuries to come.

What was the reason for the extraordinary popularity of Venus and Adonis? Sex, of course, or rather, the tantalizing prospect of sex between the mythical goddess of love and the most handsome of mortals, a violently erotic death of Adonis by the boar, and some flashy writing by an author already known in some circles as an “upstart crow.” The audience for this racy narrative was mostly educated young men, often on their way up to or down from Oxford or Cambridge, a readership that initially constituted a sizeable share of the emerging book-buying population in Shakespeare’s day. As the century wore on, though, women too became frequent readers of the poem.

2. The same is true of Shakespeare’s more serious poetic “sequel” with its noble heroine, The Rape of Lucrece, initially published in 1594, and only slightly less popular than Venus and Adonis. The Rape of Lucrece, or Lucrece, as stated more simply on the original title page, is Shakespeare’s only work in which a woman’s name appears alone in the title. With the drama, even Cleopatra has to share top billing with Antony. The same is true for Juliet and her Romeo. The other named persons in the play titles are all men. In naming his narrative poem after a woman, and a noble Roman woman at that, Shakespeare was signaling his poem’s affiliation with the highly popular tradition of female complaint poems that circulated widely under Queen Elizabeth.

3. Shakespeare’s Sonnets (1609), often considered to contain the finest lyrics in the English language, was barely noticed in his lifetime and for nearly two centuries thereafter. Why so? Theories abound, usually to do with changing literary tastes in Jacobean England, but this and other mysteries continue to envelope these wonderful poems, including  questions of the identity of the “young man” as well as the “dark lady.”

4. Should the Sonnets be read as telling a true story of Shakespeare’s loves? Many scholars say no, but this hasn’t stopped the impulse to do so—so real and immediate their passions seem, and so up-to-date in their sexual preferences and transgressions.

5. On the general question of authorship, did the person we call Shakespeare write the poems generally attributed to him? There seems little doubt that he was the author of the two narrative poems. His name appears on the dedicatory page to each. With the Sonnets, his name is likewise conspicuous, crawling boldly and possessively along the top of the page. As for that most mysterious of poems, “The Phoenix and Turtle,” Shakespeare’s name appears at the end of the poem in the original 1601 publication. So not much doubt here.

But what about the narrative poem placed at the end of the 1609 edition of the Sonnets called A Lovers Complaint, in which a seduced maid plaintively—and not quite repentantly–recounts her seduction at the hands of a young man?  So close to the situation in the Sonnets and yet, stylistically, to some readers not quite close enough to banish doubts about the poem’s authorship. But, if it’s  not Shakespeare, then who? Suppose we accept, as many do, that Shakespeare occasionally collaborated with others in writing some of his plays, might not the same be the case here, and that what we have is something of a workshop poem? Shakespeare in the company of another, the master teaching the apprentice. And just who might that other person be? Maybe, just maybe, the “dark lady” herself, sometimes identified with the poet, Aemelia Lanyer, the first female, in fact, to publish a volume of verse in England just two years after the sonnets appeared? A guess, of course, with no evidence to back it up, but anyone who travels very long in Shakespeare-land is entitled to a fantasy or two. But, nevertheless, it’s an ongoing question that will continue to be debated and examined by scholars.

Featured image credit: Royal Park of the Palace of Caserta – Venus and Adonis Fountain by Livioandronico2013. CC-BY-SA-4.0 via Wikimedia Commons.

Jonathan F. S. Post is Distinguished Professor of English at UCLA, and the Founding Director of the UCLA Summer Shakespeare Program in Stratford and London. He is the author of many books and articles, including A Thickness of Particulars: The Poetry of Anthony Hecht, (Oxford University Press, 2013), and the editor of The Oxford Handbook of Shakespeare's Poetry (Oxford University Press, 2013). He is also the author of Shakespeare's Sonnets and Poems: A Very Short Introduction.