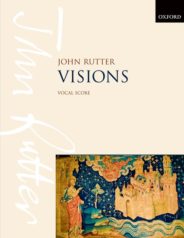 I first met John Rutter in London during the Menuhin Competition 2016. It was one of my most memorable moments of that year, and it wasn’t just any old year, as it marked the centenary of the great Yehudi Menuhin’s birth. The Competition celebrated this centenary year by inviting past winners, myself included, to take part in special events and concerts. I was honoured to be invited to give the premiere of a new piece by John Rutter, Visions. Little did I know that this unique experience, and the relationship which developed from it, would have such a lasting impact on my musical life.

When I received the score, I was struck by the unadulterated lyricism and transparency of the violin part and the intertwining dialogue between my line and the choir’s. The music flowed very naturally under my fingers and I was moved to learn that John had moulded the piece to suit my specific playing style.

Working with John was a great pleasure from the very beginning. His warm and engaging character put me at ease immediately. I played his piece to him, and he said very little; I took this to be a good sign. I was delighted to discover that my initial approach was in line with his intentions, and that he was satisfied with my reflection of his vision.

The premiere was a beautiful occasion, greatly enhanced by the atmosphere and wonderful acoustic of the Temple Church, London.

I felt tremendously honoured when John then invited me to make the first recording of the piece with him. To bring a piece to life is a process which defines me, and I always strive to attune myself with the composer’s true intentions. It made me deeply happy to have been given the chance to record Visions, conducted by the composer.

I look forward to performing this piece many more times in the future!

Acclaimed by musicians and audiences alike for his commanding stage presence, magnificent tone, and musical integrity, the Canadian violinist Kerson Leong is quickly establishing himself at the forefront of his generation since gaining international recognition by winning Junior First Prize at the Menuhin Competition 2010. Kerson gave the premiere of John Rutter's Visions at the Menuhin Competition 2016.