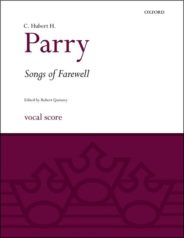 2018 marks the centenary of the death of Hubert Parry, one of the finest and most influential ­musicians of the late nineteenth and early twentieth centuries.

Over the last few months I have had the privilege of making the first critical edition of his late choral masterpiece, the Songs of Farewell, with reference to the autograph manuscripts, held in the Bodleian Library, and a set of early printed versions. I’ve known these marvellous pieces for years—partly through the classic recording made by Christopher Robinson and the Choir of St George’s Chapel, Windsor in 1987—and the process of editing them has only increased my admiration for Parry. He composed the set over a period of nearly a decade, beginning in 1907: the manuscripts give us a vivid picture of the compositional process, with some motets emerging almost complete in early sketches, and others involving an apparently tortuous process of drafting and redrafting. The first and best known, My soul, there is a country, was subject to several revisions, including the recasting of its mystical opening, and obvious indecision about one particular soprano note toward the end. The fourth motet, There is an old belief, was the first to be composed, for a ceremony at the Royal Mausoleum at Frogmore in January 1907. In 1913 it was revised, and at this point Parry began to assemble a set around it. In the process he vacillated between two versions of the section “serene in changeless prime”, apparently deciding on the eventual form only at the last minute.

I am the Organist of New College, Oxford, and there is a particular connection between the choir I direct there and the Songs of Farewell. Early performances of some of the motets were given in services at New College, with the choir directed by Parry’s friend (and eventual successor as Director of the Royal College of Music) Hugh Percy Allen. Parry was sometimes present: one such occasion is mentioned in the memoir of a former New College chorister. He later heard the final motet Lord, let me know mine end performed by the Oxford Bach Choir, once more under Allen, a note of thanks for which is among Allen’s papers in the New College archives. The fact that the manuscripts generally ascribe the top vocal line to ‘Treble’ rather than ‘Soprano’ perhaps suggests that Parry had a collegiate-style choir with (in his time boy) choristers in mind, though there is no doubt that the motets sound magnificent performed by mixed and/or larger forces. Whatever the nature of the sound Parry imagined as he composed his motets, he writes superbly for voices. The parts (between four and eight of them) are held in perfect balance, at various points in intricate yet fluent counterpoint, clear and direct homophony, and even sometimes in dramatic unison.

Perhaps because he is now best known for the coronation anthem I was glad when they said unto me and unison setting of Blake’s Jerusalem, Parry is often regarded as a quintessentially ‘English’ composer. But if we take that to mean that he was nationalistic or narrow-minded, we do him and his music a grave disservice. He was, in fact, a cosmopolitan, open-minded liberal, and his music should be heard in the context of the European (specifically German) ‘mainstream’ of the nineteenth century. It was this influence that so decisively refreshed musical culture in Britain during Parry’s lifetime, through his music, and that of his contemporary Charles Villiers Stanford and, later, Edward Elgar (of whom Parry was a notable supporter, while the rebarbative Stanford was jealous).

Two poignant further contexts in which we may hear the Songs of Farewell are the First World War and Parry’s declining health (he was suffering from heart failure, sometimes sustaining several small ‘heart attacks’ in the course of a week by the mid-1910s).

The slaughter of the war bore double significance for Parry. First, it signalled a bitter end to the many decades of cultural cross-fertilisation between Britain and Germany. This had influenced not only Parry’s own education (through his studies in Stuttgart, and in London with the German educated pianist Edward Dannreuther, which brought him into contact with Wagner among others), but also his professional life at the Royal College of Music, which had been founded in 1882 on the German Hochschule model. Secondly, it robbed the country of many talented young musicians known to Parry, including two alumni of the RCM: George Butterworth, who died on the Somme in 1916, and Ernest Farrar, whose death preceded Parry’s own by less than a month. It is difficult to hear the passage “and you whose eyes shall behold God” in At the round earth’s imagined corners without thinking of the sacrifice of these young men—even though its composition predates the death of Butterworth and Farrar. Likewise, the closing section of Lord, let me know mine end seems inextricably linked to the composer’s physical decline: “O spare me a little, that I may recover my strength, before I go hence, and be no more seen.” Parry died on 7 October 1918, just over a month before the Armistice, having heard all six motets performed separately, but never as a set.

Robert Quinney is organist and choir master at New College, Oxford and editor of Songs of Farewell. He has previously been Sub-Organist of Westminster Abbey and Director of Music at Peterborough Cathedral, and, for several years, directed the Oundle Summer School course for young organists.

Securing the future of the Male Voice Choir