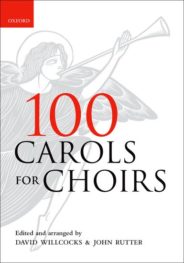 As Christmas draws to a close, so too does the busiest time of year for OUP’s Hire Library. For three months thoughts of Christmas and caroling have occupied our minds, as we have been busy preparing bookings for many hundreds of carol orchestrations for both concerts and services.

Unsurprisingly, the majority of our most-hired materials this year have come from one of the most authoritative carol collections available to choirs today: the Carols for Choirs series and, in particular, David Willcocks and John Rutter’s 100 Carols for Choirs. Whilst many singers are likely to have sung from this book, it is unlikely that many know the story of its conception.

The story of Carols for Choirs begins in 1958; the year in which Sir David Willcocks directed his first carol service with the Choir of King’s College, Cambridge. Unimpressed by the ‘dull’ requirement for unison singing throughout popular Christmas Hymns such as ‘O come, all ye faithful’ and ‘Hark! the herald-angels sing’, Willcocks elected to write some descants to supplement these hymns, which were to be included as part of the Festival of Nine Lessons and Carols broadcast that same year. Following a fantastic public reception and much to the surprise of Willcocks, who had never had any of his music published before, the young director of music was approached by music editors to publish these new arrangements.

The success of Willcocks’ published descants later piqued the interest of editor Christopher Morris, who then asked him to arrange a further 50 carols to be published as a new anthology. It appears that Willcocks was rather startled by this figure, as his immediate response was that 50 would not be possible in conjunction with the heavy demands that came with being the director of music at King’s. He instead asked to arrange 25 of the carols himself and for a second person to be selected to take the other 25.

The individual selected was Reginald Jacques, the then director of the Bach Choir. Together the two aimed to create the world’s first choral collection containing an excellent selection of popular and enduring carols, which could be used in a concert setting as an alternative to mass photocopies of sheet music. It was for this reason that the anthology was initially to be called Carols for Concerts – a title that was, eventually, revised and replaced by the one that we know and love today.

Willcocks and Jacques had very clear ideas about the repertoire that was to be included in their anthology. For example, although Holst’s ‘Lullay my liking’ and a new carol from Britten were originally intended to be included, both pieces were later reconsidered and subsequently axed. Perhaps most importantly, Willcocks and Jacques decided not to segregate Christmas hymns from Christmas carols, and instead included both. An interesting consequence of this decision was that Holst’s In the bleak mid-winter, a piece which was traditionally labelled a hymn, began to be considered a de-facto Christmas carol.

Carols for Choirs 1 was wildly successful. Willcocks believed this to be because ‘people liked having one volume of carols, which was basically not too difficult, and didn’t involve a lot of divisi work.’ A few years later, drawing on this success a second anthology was published, which was to be titled Carols for Choirs 2. This led to the first editorial collaboration between David Willcocks and John Rutter.

Willcocks had met Rutter whilst the latter was studying for his degree at Cambridge. When it was suggested that a second anthology be published following Reginald Jacques’s death in 1969, Willcocks proposed that Rutter took Jacques’s place as general editor. Rutter’s involvement introduced, among many other settings, his version of the ‘Twelve days of Christmas’ to the now definitive anthology. Rutter and Willcocks went on to collaborate on the editing of Carols for Choirs from books 2-4, greatly expanding the carol repertory, and also introducing a collection of carols in book 4 for women’s or men’s only choirs.

The final collection on which the duo were to work on was 100 Carols for Choirs. This book not only contained over 70 of the most popular carols from the first three books, but also carols that had been planned to form a part of the earlier anthologies but were not able to be included due to copyright clearance issues (Elizabeth Poston’s ‘Jesus Christ the Apple Tree’ was one such piece).

For the Hire Library, one of the most important features of David Willcocks, Reginald Jacques, and John Rutter’s additions to the Carols for Choirs repertory is the fact that they decided to orchestrate many of their carol settings. In 100 Carols for Choirs, these orchestrations were expanded to include some brass accompaniments, which allowed for more varied and interesting carol concerts and services.

So, keeping with the end-of-year theme, which carol came out on top of our list in 2017? It will come as little surprise to many, I’m sure, to find out that the most hired title this year was Willcocks’s arrangement of ‘O come, all ye faithful’. Although Christmas may be over for another year, our memories of hearing carols such as this one live in performance will remain long into the New Year. Indeed, as Rutter states: ‘It lights up the sky, just like the best descants should do… I thought this was just an extraordinary piece of writing that transformed a classic hymn into something more splendid and more inspiring than I could have imagined.’ See what made the top 10 list below.

Featured image credit:  © Oxford University Press. Not to be used without permission.