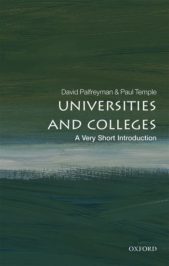 Higher education has generally been reckoned to be one of the UK’s success stories, competing with the best American universities and setting the standard against which universities in other European countries measure themselves. Perhaps that’s surprising for a few smallish islands off the north-west coast of Europe, known for rain and fog. Much of this success relates to the outward-looking orientation of UK universities, perhaps reflecting an island heritage: 28% of academic staff at UK universities are from abroad, with 16% of that total coming from other European Union (EU) countries – a much higher proportion than in most countries. UK universities have, then, snapped up talent wherever they found it and have prospered as a result: islands need outsiders if they’re going to be successful.

UK universities have also been leaders in EU research, particularly in the big multiyear “Framework” programs across the sciences and social sciences, involving teams of researchers in universities and other organizations from right across Europe. UK universities receive roughly €1bn a year from European programs, as well as scooping up many of the brightest students from around Europe who want to study in Britain (the English language helps, of course, but that’s only part of the story). UK science, in particular, has benefited from EU-funded projects such as the nuclear fusion project known as JET, which has come closer than anyone else to generating electricity from fusion – the holy grail of sustainable energy. Advanced projects such as this attract the best scientific brains from around the world, who may work collaboratively with UK universities and perhaps take up jobs in Britain when their project work ends. It’s a virtuous spiral, of international collaboration driving up standards locally, which makes future international work more likely, attracting more smart people, and the businesses who want to work with them, from around the globe.

What’s not to like? Well, plenty, apparently. All these good things depend on the UK being a member of the EU, and the British government has decided that it wants to play no further part in this kind of European collaboration. Britain thinks it will save money as a result – being a relatively rich country, the UK is a net contributor to the EU budget – but the government doesn’t seem to understand that in academic work, money is only part of it: people are more important. (You might think that politicians would get the people thing.) Even if in the improbable event that the UK government fills the €1bn hole in university budgets, exclusion from joint European projects will put British research out on a limb, detached from mainstream European work. An island drifting off into the Atlantic mists, as our European friends see it.

As a result, an unintended message is received by people in other European countries, and beyond: Britain doesn’t value you. This is already making it difficult for UK haulage firms, for example, to recruit the truck drivers needed from abroad: what will be the effect on researchers who could get a job tomorrow at a top university anywhere in the world? Is it likely that they will choose a country that is pulling out of European commitments, seeking to cut itself off? Universities in other European countries, long used to operating in the shadow of UK higher education, are realising that a wonderful opportunity is opening up: they will be sad to lose contact with their British friends, sure, but they will be able to recruit the international students who would probably otherwise have gone to Britain, gain the research contracts that would otherwise have gone to the UK, and recruit the academic staff to go with them.

Advanced manufacturing in areas such as aerospace and pharmaceuticals – both British strengths – will slowly migrate to other European centres as the international companies concerned decide that they need to be able to operate freely across European markets, not just in the British one. (The move of the European Medicines Agency from London to Amsterdam, for example, will encourage pharmaceutical firms to follow it.) The “knowledge economy” to which universities have both contributed and benefited from will gradually weaken in the UK and strengthen in mainland Europe. Britain will become an island in more than the strictly geographic sense.

He is the co-author, alongside David Palfreyman, of Universities and Colleges: A Very Short Introduction.