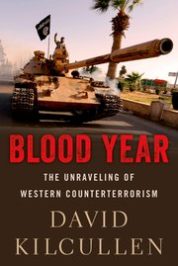 The early years of the 21st century are marred by acts of violence and terrorism on a global scale. Over a decade later the world’s problems in dealing with international threats are unfortunately far from over. In this excerpt from Blood Year: The Unraveling of Western Counterterrorism, author David Kilcullen looks back on a time he was called upon to help develop a strategy for the Australian government in fighting this new global threat.

In October 2002 terrorists from al-Qaeda’s Southeast Asian affiliate, Jemaah Islamiyah, bombed two nightclubs on the Indonesian island of Bali. They murdered 202 people, including eighty-eight Australians, and injured another 209, many blinded or maimed for life by horrific burns. Bali was the first mass-casualty hit by al-Qaeda or its affiliates after 9/11, a wake-up call that showed the terrorist threat was very much alive and close to home. It spurred the Australian government into increased action on counterterrorism.

A small group of officers, led by the ambassador for counterterrorism, Les Luck, was selected from Australia’s key national security agencies, given access to all available intelligence, and tasked to conduct a strategic assessment of the threat. In early 2004, as an infantry lieutenant colonel with a professional background in guerrilla and unconventional warfare, several years’ experience training and advising indigenous forces, and a PhD that included fieldwork with insurgents and Islamic extremists in Southeast Asia, I was pulled out of a desk job at Army headquarters to join the team. Our efforts produced Transnational Terrorism: The Threat to Australia, the framework until 2011 for Australia’s counterterrorism strategy and for cooperation with regional partners and allies including the United States, the United Kingdom, Canada and New Zealand.

Looking at the threat in early 2004, we saw a pattern: the invasion of Afghanistan had scattered but not destroyed the original, hierarchical AQ structure that had existed before 9/11. Many of those fighting for AQ in Afghanistan in 2001 had been killed or captured, or had fled into Pakistan, Iran or Iraq. Osama bin Laden and his deputy, Ayman al-Zawahiri, were in hiding; Khalid Sheikh Mohammed (planner of 9/11 and mastermind of the Bali bombing) was in CIA custody at an undisclosed location. What was left of AQ’s senior leadership was no longer a supreme command or organizational headquarters, but a clearing house for information, money and expertise, a propaganda hub, and the inspiration for a far-flung assortment of local movements, most of which pre-dated AQ.

Al-Qaeda’s “Centre of Gravity”—from which it drew its strength and freedom of action—was neither its numbers nor its combat capability (both of which were relatively small) but rather its ability to manipulate, mobilize and aggregate the effects of many diverse local groups across the world, none of which were natural allies to each other.

In this sense, AQ had much in common with traditional insurgent movements, which manipulate local, pre-existing grievances as a way to mobilize populations, creating a mass base of support for a relatively small force of fast-moving, lightly equipped guerrillas. These guerrillas work with numerically larger underground and auxiliary networks to target weak points such as government outposts, isolated police and military units, and poorly governed spaces. They might try to build “liberated” areas, forge coalitions of like minded allies into a popular front, or transition to a conventional war of movement and thereby overthrow the state. But unlike classical insurgents, who target one country or region, AQ was a worldwide movement with global goals. Thus, to succeed, bin Laden’s people had to inject themselves into others’ conflicts on a global scale, twist local grievances and exploit them for their own transnational ends. This meant that AQ’s critical requirement, and its greatest vulnerability, was its need to unify many disparate groups—in Somalia, Indonesia, Chechnya, Nigeria, Yemen, the Philippines or half-a-dozen other places. Take away its ability to aggregate the effects of such groups, and AQ’s threat would be hugely diminished, as would the risk of another 9/11. Bin Laden would be just one more extremist among many in Pakistan, not a global threat. He and the AQ leadership would become strategically irrelevant: we could kill or capture them later, at our leisure—or not.

Out of this emerged a view of al-Qaeda as a form of globalized insurgency, and a strategy known as “Disaggregation.” Writing for a military audience in late 2003, I laid it out like this:

Dozens of local movements, grievances and issues have been aggregated (through regional and global players) into a global jihad against the West. These regional and global players prey upon, link and exploit local actors and issues that are pre-existing. What makes the jihad so dangerous is its global nature. Without the … ability to aggregate dozens of conflicts into a broad movement, the global jihad ceases to exist. It becomes simply a series of disparate local conflicts that are capable of being solved by nation-states and can be addressed at the regional or national level without interference from global enemies such as Al Qa’eda … A strategy of Disaggregation would seek to dismantle, or break up, the links that allow the jihad to function as a global entity.

They say you should be careful what you wish for. In designing Disaggregation, our team was reacting against President Bush, who, through the invasion of Iraq, the “axis of evil” speech and statements like “Either you are with us, or you are with the terrorists,” had (in our view) destabilized the greater Middle East and greatly inflated the danger of terrorism. The existing strategy had lumped together diverse threats, so that Washington ran the risk of creating new adversaries, and of fighting simultaneously enemies who could have been fought sequentially (or not at all). Practices instituted in the early years of the War on Terrorism, as a result of this “Aggregation” of threats, had proven strategically counterproductive and morally problematic.

Featured Image:  Afghanistan by The US Army. CC BY 2.0 via Flickr.

Dr. David Kilcullen is the Chairman of Caerus Associates. Before founding Caerus, Dave served 24 years as a soldier, diplomat and policy advisor for the Australian and United States governments. He was Special Advisor to the Secretary of State from 2007-2009 and Senior Advisor to General David Petraeus in Iraq in 2007. He is the author of bestselling books The Accidental Guerrilla and Counterinsurgency, both are used worldwide by civilian government officials, policymakers, military and development professionals working in unstable and insecure environments. His most recent book is  Blood Year: The Unraveling of Western Counterterrorism.

Lützen and the birth of modern warfare